A whopping $2-million budget. Elaborate sets that fly in at the dancers' peril. A backstage madhouse of wig and costume changes. State-of-the-art, complex technology. An original score that is sumptuous in orchestration. In short, ballet meets Broadway.

When Alice's Adventures in Wonderland opens on June 4 at the Four Seasons Centre in Toronto, it will be the largest production in the history of the National Ballet of Canada. "In size and theatricality, Alice can be compared to a big-ticket musical," artistic director Karen Kain says. "But at its heart, it is pure ballet."

Alice is a co-production with the Royal Ballet. Lucky for the National, the major kinks in Tony-Award winning Bob Crowley's visionary set design were ironed out in March, when its partner company performed the ballet in London, to great acclaim. Even the London dance critics had good things to say - The Independent said it was "dazzling," while The Telegraph predicted it would be hugely popular - which, for that curmudgeonly lot, amounts to rave reviews.

The choreographer is British-born, Royal-trained, New York-based Christopher Wheeldon, 37, regarded as the heir to the great English storytelling choreographers, Sir Frederick Ashton and Sir Kenneth MacMillan. Alice is also the biggest ballet Wheeldon has taken on, and it the first full-length, start-from-scratch, original work the Royal had mounted in 15 years.

"I had cut my teeth on non-narrative, abstract ballet. It was a safe genre for me and I was good at it," Wheeldon says. "It was Monica Mason, the Royal's artistic director, who suggested that it was time for us to do something big together. I had been very impressed with the National dancers when I set Polyphonia on the company. I suggested the National as a partner."

Lewis Carroll (the pseudonym for Charles Lutwidge Dodgson) based his 1865 classic children's novel on stories he made up for the three young Liddell sisters, Lorina, Alice and Edith, during an 1862 boating trip on the Thames River. It was Alice who suggested he write the stories down. The girls' father was dean of Oxford's Christchurch College, where Carroll was a lecturer in mathematics.

Wheeldon fell in love with Carroll's Alice as a child, fascinated by its characters, mathematical puzzles and wordplay. "In truth," he says, "there's not much of a story. On the other hand, the book's episodic nature is good for dance, but we still needed a dramatic through line."

Enter playwright Nicolas Wright, who helped fashion the scenario. Wheeldon, Wright, and composer Joby Talbot locked themselves in Wheeldon's Brooklyn apartment for three days of brainstorming. The dramatic arc that emerged was a garden party prologue, where the audience meets the real people, who then become characters in Alice's dream after she falls down the rabbit hole. Mrs. Liddell and the Queen of Hearts are performed by the same dancer, while Lewis Carroll becomes the White Rabbit.

As well, each character has his or her own musical leitmotif. For sheer whimsy, the Mad Hatter tap dances throughout. And because, as Wheeldon says, every ballet needs a couple of romantic pas de deux, the creators made Alice a teenager instead of a seven-year-old, so she could have a crush on Jack, the gardener's boy, who becomes the Knave of Hearts.

National artist-in-residence Rex Harrington alternates the roles of the Duchess and King of Hearts. Great ballet storytellers, Harrington points out, are rare on the planet, but he says Wheeldon has the goods. While the choreographer pays homage to classical ballet, he is also inventive in his dance vocabulary.

"Christopher is extremely musical," Harrington says, "and a dancer has to be aware of the beats while fitting in intricate footwork and tricky partnering. There isn't any traditional mime in the piece because he has the gift of defining character through choreography. Every step is there for a purpose."

Wheeldon believes the success of the story depends on the performers. "My approach to dancers is to treat them as actors. I work very hard to make the story dance." 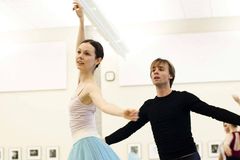