Linda Griffiths liked to give her subjects breathing space. The Montreal-born playwright and actor, who died in 2014, understood that pinning down the enigma of character had less theatrical currency than engaging that enigma in some smart, and delicately ironic, fun. Her empathy for her subjects – who range from Pierre and Maggie Trudeau to the U.S.-born duchess Wallis Simpson (the woman who took Edward VIII away from the throne) – runs deep, but this doesn't safeguard them from a little teasing.

So her 1999 play Alien Creature is subtitled A Visitation from Gwendolyn MacEwen, a caption that engages just a little wryly with both the Toronto poet's mythical stature and MacEwen's own obsession with mythology. The play won the 2000 Chalmers Award (and was nominated for a Governor-General's Award the same year) and you can hear why: The script is layered, complex and playful. There are long forays into metaphor juxtaposed with sardonic quips on love, men and drinking. We end up with an evocation of the process of making art alongside the story of the poet herself, an autodidact who spoke Hebrew, Arabic, Greek and French and published more than 20 books of poetry before dying (likely of alcoholism) at 47. Director Jani Lauzon's new production, now playing at Theatre Passe Muraille Backspace, is particularly good at painting multiple tones of sadness.

MacEwen was both a fixture and an outcast in the burgeoning Toronto literary scene of the sixties and seventies. In the play, she claims the city became as divided as Jerusalem as her rent skyrocketed, and the gap between rich and poor got worse. MacEwen is always butting her head against the values inscribed by capitalism; the play quietly condemns the way free markets push artists to the socio-economic fringe. One scene has her asking a bank teller for a loan by piling the books she's written on the counter in front of him, demanding he acknowledge her worth. She's mocking his sense of meaning, but there's an earnest appeal in the moment, too, and it bursts pathos. When the teller isn't sure whether poetry is fungible, she pares her art down even further and offers him a kiss.

In the lead role, Beatriz Pizano quivers with pride and pitifulness. There's pride at having lived a life that flouts convention to pursue the work she needs, even when dinner then consists of a green pepper and a bottle of vodka (MacEwen's signature drink). But near the end of her life, she's baffled by the loneliness of her circumstances and the poorly lit basement that symbolizes them, rendered bleakly beautiful by a yellow square of light overhead (designed by Trevor Schwellnus). MacEwen's left with little comfort beyond her books and her ideas.

There's nothing maudlin in either Griffiths's writing or Pizano's performance and if MacEwen seems wry on poverty, she's even rougher on the topic of love. She tells us, without mincing any words, that she's had many lovers – so many, in fact, that the idea of another man inside her makes her sick. We get the Cliffs Notes on her first marriage to poet Milton Acorn, 20-odd years her senior and a man who, allegedly, stank. "Do you know what it's like to be with a stinking man?" she asks us repeatedly, until transforming the accusation into a metaphor of pursuit – the smell of false love pursued her until death. Pizano constructs a woman who loved fully and rapaciously, determined to see every romance as an act of invention. "We are not supposed to love drama; we're supposed to love reality," she tells us. "I've never understood that."

What works less well in this production are the excursions into mythopoetic storytelling that show MacEwen immersed in her creative work. MacEwen wrote a poem on the comic-book character Wonder Woman, and Lauzon drops us rather suddenly into a climate of heightened physicality and inflated vocalizations that feels too precious beside the poet's stubborn lack of sentimentality. Similarly, dashes of magical realism – a flame bursts in Pizano's hand, she frees herself from handcuffs, vodka turns into sand – seem to exist in a different theatrical world. They introduce a mysticism that doesn't quite match the mix of grit and erudition in MacEwen's writing.

But as a portrait of creativity, and the extremes to which it can push an artist, exposing her to humourless darkness and fantastic loneliness, Alien Creature is merciless. Near the end of her life, MacEwen starts seeing a "blind therapist" who advises her to take more pleasure in her creativity. The line gets a cynical laugh. But the laughter evaporates by the time Pizano is standing downstage while a concentric ring of circles close in on her, each suggesting her shrinking influence, her unfulfilled ambition, the diminishing of hope. 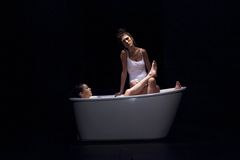 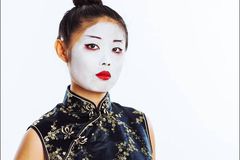