Even after Natasha Greenblatt was cast earlier this year in the Toronto production of The Railway Children, a beloved British play, she still had a hard time believing the show was ever going to go on.

"It all just seemed improbable," she says. After all, the production posed a few challenges at the time that are hardly faced by the typical play, like not yet having a place to stage it and having to ship a 49-ton train across the Atlantic. "I'm going to wait until it happens to believe it," Greenblatt recalls thinking.

A theatre has been built for the play in the shadow of the CN Tower, and "Vicky," the 19th-century steam locomotive, sits on rails outside waiting to drive in, all in the hopes of re-creating the magic - and the success - of the hit London production, which in March won the Olivier Award for best entertainment of the year.

It's no wonder that Edith Nesbit's tale proved a hit with British audiences. Many grew up with the classic children's book, about a well-to-do Edwardian family forced into poverty and sent to live beside a railway line after the father is accused of espionage and sent to prison. But both Damian Cruden (the director behind both the British and the Toronto production) and the cast say the appeal of the story is universal. "Damian [talks]about this play really speaking to [the question] What is the social responsibility of a community to its children?," says Harry Judge, 33, who plays 10-year-old Peter. "Everything about this play feels modern because of what it is, because of the fact that it's a broken family."

Of course, Judge is the first to admit that the sight of a steam engine rolling its way into the theatre will be a special bit of magic for youngsters in the audience.

"Kids will be able to go and see something that they would only imagine and dream of seeing," he says.

"The space is really gorgeous, and when you come inside it's this completely different world," she says.

Greenblatt, who grew up reading Nesbit books with her mother, confesses to being slightly nervous, considering the play's success in the U.K.

It's also the first professional show for 23-year-old Ryerson University Theatre School grad Kate Besworth. But she says, "Damian was very clear about it that this was our own show and we could make these characters our own."

Just as in the U.K. production of the play, the Waterbury children are played by actors much older than their characters.

The play begins with the characters as adults looking back at their times living by the railroad tracks and then slipping back to the children they were then.

As for playing much younger characters, it's something that each of the three actors who play the children have plenty of experience with.

"I think my entire production life so far has been playing kids," says Greenblatt, who studied at the National Theatre School of Canada. "It requires a lot of energy, but kids have a lot of fun."

Indeed, Besworth says that playing an eight-year-old comes with a mix of exhaustion and elation.

"Playing Phyllis is such a joy for me because she's not self-conscious at all. Everything just comes out and everything's out there and so real for her all the time. It's exhausting, but there's no one I'd rather be for two hours," she says.

Judge thought his days playing children would be over after he wrapped up the title role in a production of Peter Pan at the Globe theatre nearly two years ago in Regina. "Rather than it being the end of my youth, it really felt like actually kind of the beginning of my youth," he says. "I think I had a sense that I needed to be an adult really quickly, and so now I'm so happy playing a kid."

It's the play's hope that the entire world created inside the Roundhouse Theatre will evoke that sense of what it's like to be a child. And for kids who want to be kids, well, there's also something waiting for them before they even get in to the theatre.

"There's even this miniature train that kids can ride on that goes around outside," Greenblatt says. "I feel like that will also be a hit."

The Railway Children is now playing at Toronto's Roundhouse Theatre. 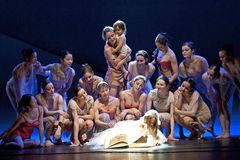 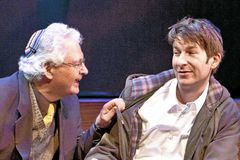