We lined up outside the stage door in the cold, and filed onto the stage of Vancouver's Queen Elizabeth Theatre through the wings, where we sat on cushions on the floor, on low backless benches and on vintage (or vintage-style) chairs. Some audience members were right on set – there were two people seated at the kitchen table, a few were hunkered down on cushions in the living room, and some on chairs in the bedroom. Even those like me who snagged a seat on an old couch in what stood for a back row were mere steps from the action.

This playful, intimate vision comes from the Siminovitch Prize-winning brain of Kim Collier, Electric Company Theatre co-founder and now currently associate artist at Canadian Stage in Toronto. Best known for technologically forward multimedia productions ( Studies in Motion, Tear the Curtain), Collier for years has wanted to create a work of theatre where the audience sits on-stage, embedded in the play.

A clever idea, sure, but with the wrong material, it could feel gimmicky. And in the wrong hands, it could materialize as just a mess of bodies on set.

In Tad Mosel's Pulitzer Prize-winning All the Way Home, Collier found the right story for her lo-fi experiment. The play, set in 1915, is an intimate examination of grief and family, marriage and love, childhood and aging.

Jay (Jonathon Young) and Mary (Meg Roe) have a six-year-old son (Jordan Wessels) and a baby on the way. They suffer what appear initially to be some run-of-the-mill marital conflicts – she's Catholic and he's not; she's a bit judgmental; she worries that he's keeping his distance (a lovely line delivered as it is with everyone so darn close). But mostly they appear to have a strong, loving bond. What marriage, after all, doesn't have problems?

In Collier's production, the audience, presumably, is meant to feel like it's part of this dysfunctional family, or at the very least like the nosy neighbours. Geographically, we are certainly close enough to see them sweat, to see the hairs on their arms. When Mary receives the phone call that drives the action in the play, I was maybe two metres away from her, and I could see every muscle transform in her face, witnessing close-up the shock washing over her.

It's one thing to watch someone fall apart onstage. It becomes quite another when you're on the stage with them.

Credit here goes not just to Collier for her vision, but to Roe, whose performance is astonishing: Her chill-inducing grief is palpable if somewhat restrained (as dictated by Mary's character), her tiny body becoming heavy before our eyes with anguish and remorse. She is simply spectacular, and transcends the format to become the show's true highlight.

Collier has set the play in British Columbia – and added music. The show floats with period-appropriate songs performed by the cast, who harmonize, often as they slowly circle the audience perimeter.

Inside the perimeter, Collier creates a sort of choreography in which the cast initiates a careful and intimate dance with the audience. The actors deliver focused performances despite the obvious challenges of bodies and purses in their way.

Young is very strong, bringing a down-home confidence to his role. Sutherland gives us a haunted, complex Ralph, when he could have easily descended into the merely comical and detestable. Gabrielle Rose is predictably excellent as Aunt Sadie and Mary's mother, but the latter role – in which she spends most of the evening – is limited. Mama's hearing problems are a metaphor, but also provide much of the show's comic relief, which clashes with the sophistication of the rest of the play (perhaps this worked better in 1960, when the play premiered). Nicola Lipman's Aunt Hannah is a solid combination of humour and gravitas.

But sightlines and voice projection are significant issues. There were some key moments in the action that I simply could not see. And, with the exception of Young and Rose, when the actors were facing away from me, I often had trouble hearing their lines. Other audience members had the same problem. Also, frankly, the seating was just not that comfortable. Even on my vintage couch, I was not exactly luxuriating, and people on those backless benches looked mighty relieved when it was all over after more than two and a half hours (with two breaks).

Most difficult, for me, was the almost joyous turn the play seemed to take as it raced to its conclusion. While I don't argue with the uneasy redemption Mary manages to find, or the nifty site-specific tricks Collier pulls off, I did find the mood incongruously cheerful for the material. Optimism, sure. But joy? Or maybe it was just my aching back.

That said, this production of a superbly written story is a once-in-a-lifetime experience: a chance to share the QET stage with many of the city's finest actors as they sweep us onto the roller coaster of other people's troubled – and beautiful – lives.

All the Way Home runs until Saturday.

All the Way Home 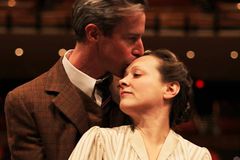