The Tony Awards are a true toss-up this year.

No one in New York is confident predicting which show is going to win best musical, Broadway’s biggest award and the one most likely to deliver a box-office boost, on Sunday night – and just as the industry voters in the United States seem divided, so are theatre lovers on this side of the border.

Indeed, there are reasons to root for three of the five best-musical contenders from a purely Canadian perspective.

Ain’t Too Proud: The Life and Times of the Temptations is directed by Des McAnuff and choreographed by Sergio Trujillo, both Canadians and both nominated in their respective categories; the jukebox musical has plenty of fans in Toronto from its run in the city on the way to New York courtesy of co-producer David Mirvish.

Then there’s Hadestown, a creatively staged jazz-folk retelling of the myth of Orpheus and Eurydice by songwriter Anais Mitchell, which worked out its own devilish details in front of Edmonton audiences at the Citadel Theatre the fall before.

And The Prom, an original musical comedy about washed-up Broadway performers who help a teen girl barred from bringing her same-sex date to prom, is co-written by national treasure Bob Martin, nominated for best book with his writing partner, Chad Beguelin. (Martin previously won a Tony for The Drowsy Chaperone – and is also beloved by theatregoers for co-creating that cult TV spoof of the Stratford Festival, Slings and Arrows.)

Rounding out the best-musical category are new adaptations of movies from the 1980s: Tootsie, which got excellent reviews and has a chance of winning, and Beetlejuice, which didn’t and probably doesn’t.

“This is one of those seasons where there’s no runaway front runner,” says Michael Rubinoff, producing artistic director at the Canadian Music Theatre Project, where the hit Come From Away got its start, and a man who keeps his finger on the pulse of Broadway. He sees it as a four-way horse race.

From this side of the border, it’s certainly tempting to see Sunday’s Tony Awards – which James Corden will host on CBS – as a rematch of the 2006 one when an original musical about musicals co-written by Martin was up against a jukebox musical created by McAnuff and Trujillo.

When The Drowsy Chaperone and Jersey Boys went head to head, the former’s four Canadian creators ultimately all picked up Tony Awards for their work, but the crowd-pleasing Frankie Valli and the Four Seasons musical snatched the top prize.

An unscientific New York Times poll of a full 15 per cent of 2019 Tony voters, however, found Hadestown most likely to win best musical.

That would be music to the ears of Citadel Theatre artistic director Daryl Cloran, who attracted international attention to his theatre company by hosting the show and its creative team on its path toward Broadway. “We’ll be cheering for the incredible artists of Hadestown on Sunday night and will take our own personal pride in a Tony win, knowing the collaboration of our team was an important part of this project’s development,” he wrote in an e-mail, saying he’ll be watching on TV from Alberta.

(The Edmonton not-for-profit theatre doesn’t have a stake in that commercial production it helped develop – although one of the Canadian performers that joined the cast for the show’s Citadel run, Jewelle Blackman, remains in it.)

While Hadestown is undoubtedly the hippest of the contenders, it has vehement detractors who believe it is style over substance – and if Tony votes end up coalescing behind a less divisive contender, it could easily lose.

By most measures, The Prom would seem to be the unlikeliest underdog.

And while Ain’t Too Proud, Hadestown and Tootsie are all also pulling in more than US$1-million a week at the box office, generally seen as the sign of a hit, The Prom has consistently earned less, sometimes much less, than US$700,000 a week since opening at the end of October.

Still, the show has stuck it out to June, building up a fervent fan base, and has the momentum in the lead up to Sunday.

The New York Times’ two theatre critics both selected the musical comedy as their top choice for best musical a few weeks ago. And, last weekend, after watching Tootsie’s creators win award after award at the Drama Desk Awards (in which Broadway and off-Broadway compete, and for which Hadestown was not eligible), The Prom picked up the best musical gong.

Rubinoff says the political climate may make The Prom appealing. It has a clear positive political message of understanding – not just towards queer youth, but to those living in the red states that voted for Donald Trump.

I saw Hadestown and Ain’t Too Proud in their Canadian incarnations, and The Prom on Broadway, so can’t really weigh in. But all things being equals, I’d be inclined to give the Best Musical award to the musical that needs it the most – and I wonder if Tony voters might think the same way. 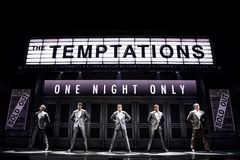