At the opening night of Soulpepper’s slow-burn production of August: Osage County, when a character dropped one of the play’s many revelatory bombshells in the middle of the third act, the audience gave a huge collective gasp of surprise. That reaction is reason alone, if you needed one, for reviving Tracy Letts’s 21st-century classic. Twelve years after it premiered in Chicago, before going on to win the Tony and the Pulitzer, Letts’s rip-roaring, pitch-black family dramedy is still as potent as ever.

It’s also an acting cornucopia. American actor-playwright Letts – he’s currently on Broadway, starring in another great family play, Arthur Miller’s All My Sons – is an actor’s playwright if ever there was one. August: Osage County, his most celebrated work, is packed with terrific roles: 13 characters occupying a sprawling, three-act, three-hour-plus saga about a squabbling, substance-abusing Oklahoma clan that would easily win gold in the dysfunctional-family Olympics.

It’s a show tailor-made for Soulpepper’s stellar resident company and it rises to the occasion – even if it takes a while for this production to kick into gear. Jackie Maxwell’s staging reverses that famous T.S. Eliot line alluded to at the play’s Who’s Afraid of Virginia Woolf-style conclusion: it begins with a whimper and ends with a bang.

As the title tells us, it’s August and we’re in Oklahoma’s Osage County, at the decrepit rural home of Violet and Beverly Weston. Beverly (Diego Matamoros), an aging, alcoholic poet, is hiring a young Cheyenne woman, Johnna (Samantha Brown), to keep house and care for the ailing Violet.

Shortly afterwards, Beverly goes missing, and the Weston kids begin descending on the house, where they find that Violet (Nancy Palk) has slipped back into a major prescription-drug addiction. The pills, she claims, are to kill the pain of her mouth cancer, but that hasn’t stopped her from chain-smoking or from shooting well-aimed barbs at the weak spots of any family member who crosses her path.

And she has plenty of targets. Barbara (Maev Beaty), a college professor and the oldest Weston daughter, is trying to hide the fact that she’s split up with her husband and fellow academic, Bill (Kevin Hanchard), after discovering his affair with one of his students. The ex-couple have brought along their precocious 14-year-old daughter, Jean (Leah Doz), who has already adopted the Weston trait of self-medication, with a taste for both cannabis and Camel Lights.

Shrewd Violet, despite regularly descending into drug-induced confusion, turns out to know more than anyone realizes. There’s more to the play, too, than I had realized. I hadn’t seen it onstage since 2009, when Chicago’s Steppenwolf Theatre Company toured its acclaimed production to Toronto with a brilliant Estelle Parsons as Violet. Then there was also that middling Hollywood film in 2013, which became a scenery-chewing vehicle for Meryl Streep.

Maxwell’s production isn’t about star turns, but family dynamics, and her actors bring out the richness in Letts’s writing. You find your heart going out to one character after another: Beaty’s Barbara, crying hopelessly as her husband walks out the door. Monteith’s Ivy, turning away and wincing in pain as her mother digs into her. Prest’s awkward Little Charles, in one of his rare happy moments, gently serenading Ivy with a sweet, silly song he’s composed.

We should also feel sad in those rare intervals when Violet sheathes her sword and, lost in a druggy fog, dances to Eric Clapton’s Lay Down Sally – haunting moments that could be an homage to the mother’s morphine reveries in Long Day’s Journey Into Night. But they’re the least effective part of Palk’s performance. Otherwise, her dingy, lank-haired Violet is as raw and stinging as an open wound.

She’s matched by the superb Paton as a healthier but no-less-nasty Mattie Fae, whose constant, casual cruelty finally causes even her mild-mannered husband to explode. Among the other characters, Maxwell puts special emphasis on Brown’s strong, quiet Johnna. Our outside eye, she looks on silently when Violet mocks the new respect for Indigenous people, but in times of crisis she’s there to rescue and heal. As Letts reminds us, the Westons, rotten remnants of the American Dream, are living on stolen land in what was once Indian Territory.

The rot is palpable in Camellia Koo’s scenery, the two-level interior of a wooden house where the white posts and stairs are grimy with what may be fire damage and the rooms look dirty and dishevelled. The set is on a turntable whose slow, creaking movement is echoed by Deanna H. Choi’s sound design of rasping strings. You feel as if the Weston homestead is literally on the verge of falling apart.

But whatever message it may send about the deteriorating state of the American family at the start of the millennium, that’s not why Letts’s play still has us gasping and laughing, cringing and empathizing. In his tragicomic Weston clan, we recognize families that we know, or – God forbid – our own. 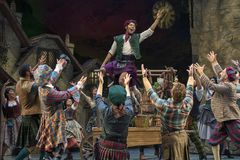 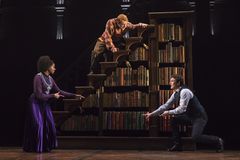