COVID-19 has delivered a wicked blow to the dance sector. Performances are off; even rehearsing has been affected by physical distancing.

But before all of that, in October, 2019, there was a glorious night at the Palais Garnier, home of the Paris Opera Ballet, when internationally renowned Canadian choreographer Crystal Pite premiered Body and Soul, her second commission for the company. The Paris run sold out and audiences loved it – even if the New York Times review called it puzzling and incoherent.

Now, Canadians will be the first international audience to be able to see the work since that Paris premiere – online. Formed in response to COVID-19, Digidance/Digidanse is a collaboration between Vancouver’s DanceHouse, Danse Danse in Montreal, Toronto’s Harbourfront Centre and the National Arts Centre in Ottawa.

The stream, available Feb. 17 to 23, includes interviews with the creators as well as the work itself – shot last fall over three different live performances plus a dedicated performance for the cameras only.

Marsha Lederman spoke with Pite from Vancouver, where she lives.

This premiere took place a lifetime ago. What was that night like for you?

It was like any premiere – running around, last-minute changes and adjustments. Nerves and intensity, exhaustion and anxiety. I have to say, a lot of premieres I barely see; I kind of watch them through a fog of fear – and also amazement. But also given that it’s the Paris Opera, it’s so full of history and expectation that it adds another layer of intensity.

Are you in Paris when you’re making the work?

I made the piece in Paris in that building. But I actually did a lot of the work here in Vancouver, before I went, with a group of students here in Vancouver at Arts Umbrella. It’s a work with 36 dancers and there’s pretty complex group choreography. Some scenes took a lot of tinkering and experimenting; it’s very time consuming and labour-intensive. So I work them out here in Vancouver with the students before I go, then remount them at the Paris Opera.

I’m wondering how you feel the events of the past year might influence the experience of watching this work.

You mean for people in the middle of a pandemic, watching that material and how the meaning changes because of this time we’re in? Yes, I would expect so, especially in the first part where you really get that feeling of protest and the conflict between two groups of people, the damage that causes the aftermath. I was just talking to someone else who was sort of caught by how close the [dancers] are to each other, the proximity, and it kind of expands that feeling in your own body – that longing, I think that we’re all feeling, to be in connection to other humans, recognizing how beautiful and important that is in our lives.

You talk a lot about collaboration. What does that look like now with COVID-19?

I’m not making any new work at the moment. Hard to believe, but I had already declared 2020 as a year off for myself five years ago. I just knew that I was going to need some time to rest and recover and think about new things and get inspired again and to rekindle my love for what I do. I didn’t want to end up in a burnout situation, so I had booked 2020 as a sabbatical year to learn new things and fill up on other influences.

Have you been able to do that in lockdown?

Yes, I think so. I think a large part of that was also just not looking at anything. I had to withdraw and retreat. I spent a lot of time in nature, a lot of time with family. And just taking a break from all things theatre.

Dance is a hard thing to put on screen, but it was amazing to watch this on film. Still, I’m wondering if that’s a bit scary for you.

It’s very scary because I’m not a filmmaker – I don’t make work for the screen. I make work for the theatre. So you’re seeing a representation of the thing, a record of it, as opposed to the artwork itself. Then, as you said, there are other things that you gained by seeing it through the camera. You get really close to the dancers – you can see the light in their eyes, the buttons on their coats, their shoelaces. And how their knuckles are white and they’re holding on to each other. I think it does in some way compensate for the fact that it’s not live.

In your interview, you say the things we make change us and teach us. How did you change from this work and what did you learn?

One is that it’s okay to think of something as an experiment. Creating something that meets expectations or has a certain kind of success sometimes comes at the expense of experimentation. And I felt proud of my team for doing this work as an experiment. We didn’t know – we still don’t know – whether or not it works. But I’m trying to learn how to be comfortable with that. The other thing I learned from this experience was just how important it is to collaborate. The more I work, the less and less I feel like I have to be at the centre of it all. I’m starting to understand better how I can lean on the people around me.

I think that comes with maturity and confidence, ironically. 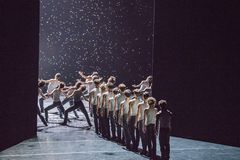 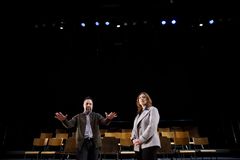 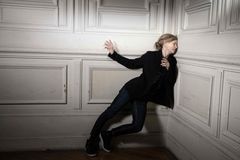