Here’s what life can look like as a working Canadian theatre artist.

Now, less than two years later, Healy, 43, is unveiling his inaugural programming as the new artistic director of Canadian Stage, one of the biggest not-for-profit theatre companies in Toronto.

There’s long been a down-to-earth integrity to Healy – whose résumé includes six critically lauded seasons running Toronto’s queer theatre Buddies in Bad Times – that he now seems intent on bringing to a company that took an elitist turn a decade ago.

Sitting down with The Globe and Mail to offer an exclusive advance look at his inaugural 2019-20 season, Healy says he wants to maintain the theatre company’s new identity as a producer and presenter of international and international-class interdisciplinary performance – but root its work in the reality of this Canadian city at this point in time.

“I feel like now in the world, Toronto is a beacon of hope," he says. “The thing that I really hope to bring to the company is making sure that mandate speaks to the particularities of Toronto … and is reflecting, authentically, Torontonians."

Matthew Jocelyn, Healy’s unapologetic predecessor who was repatriated from France to run the company (and who you could never imagine moving a couch), notably opened his first season at Canadian Stage in 2010 by directing a little-known German absurdist play called Fernando Krapp Wrote Me This Letter on the main stage – and hiring young artists to protest outside while holding “Live theatre is Krapp!” signs on opening night.

It was about upending people’s expectations of the theatre company – which, prior to Jocelyn’s arrival, had been stuck in a one-size-fits-all regional-style mandate that had become outdated and redundant as Toronto’s theatre scene and population expanded and diversified.

But Healy’s first season will open with a show with a seriousness of purpose that is a perfect example of what he intends for the company: The Book of Life, a co-production between Rwandan and Canadian theatre artists to mark the 25th anniversary of the Rwandan genocide.

The creative collaboration between Odile Gakire Katese – known in Rwanda for creating an all-female drumming circle that brought together Hutus and Tutsis – and Ross Manson – the Toronto artistic director of Volcano Theatre – collects letters written to the dead to create what Healy calls a “celebration of life” and a “tribute to our ability to overcome trauma and division.”

As artistic director, Healy programmed it because of Canada’s “deep ties to the Rwandan genocide” through our peacekeeping role there – and also to provoke conversations about truth and reconciliation and how to overcome our history here at home.

But even his inclusion of a more conventional Canadian Stage play in the season is backed by a level of depth of thought about how and when it will most speak to Toronto audiences.

Lynn Nottage’s Sweat (in co-production with Studio 180), a searing 2015 drama about a declining Pennsylvania factory town that has been seen as prescient about the rise of U.S. President Donald Trump and white nationalism in the United States, is the kind of American, Tony-nominated play that could crop up at regional theatres in Canada (and already has).

But Healy has put it on the bill so that it will open in January, 2020 – the month that General Motors plans to halt operations at its Oshawa, Ont., assembly plant.

Another eye-catching show in Healy’s first season is one that he is directing: How to Fail as a Pop Star by Vivek Shraya, the Polaris Prize-nominated musician and author I’m Afraid of Men.

Shraya, who came out as transgender in 2016, recently became ensnared in a local theatrical controversy when Buddies in Bad Times co-founder Sky Gilbert dedicated a poem to her called I’m Afraid of “Woke People” that led to the cancelling of an anniversary reading of one of his plays at Buddies.

“I’ve known Vivek for over a decade and she has been an artist I’ve wanted to work with,” Healy says. “It’s not intended as a statement about Sky. … Throughout history, artists are in dialogue with one another – and it’s often the conversations that occur between artists that raise both their profiles.”

These three shows all obviously speak to Toronto and Ontario here and now – but so, he hopes, will entirely international work such as Minorities, a dance piece by the up-and-coming Chinese choreographer Yang Zhen that gives voice (and body) to ethnic minorities in China.

On the whole, Healy’s first season will please those who admired Jocelyn’s changes to the company. There is a selection of interdisciplinary imports such as Un Poyo Rojo, a comic dance-theatre piece from Argentina; and Spirit, a contemporary dance piece from Australia’s Bangarra Dance Theatre.

Healy’s first slate of local productions are, likewise, by Canadian Stage artists Jocelyn also championed. Kelly V. Kelly is a new musical with music and lyrics by Britta Johnson and book by Sara Farb that, like Johnson’s sold-out success Life After in 2017, will be co-produced with the Musical Stage Company. Let’s Run Away is the latest solo performance from playwrightand performer Daniel MacIvor and director Daniel Brooks, while Radical Vitality: Solos and Duets is a new show by the choreographer Marie Chouinard.

Rounding out Healy’s inaugural season will be a double bill of world premieres by Toronto playwright Susanna Fournier (The Empire Trilogy), collectively titled Always Still the Dawn and directed by Liza Balkan and Severn Thompson, the latest graduates of the Canadian Stage/York University MFA in stage direction that Jocelyn established (and is one of the many positive legacies of his tenure).

Between Magnetic North’s collapse (not his fault; he had barely started there) and now, Healy didn’t just work on Canadian celebrity pools, of course – he also had a brief stint as a Brampton, Ont., artistic director of performing arts, which Canadian Stage quickly lured him away from with its “once in a lifetime opportunity.”

The long-admired director has been hotly in demand as a leader since he left Buddies in 2015 to enroll in a master’s degree in arts management, a modified MBA that’s a collaboration between universities in Montreal (his hometown), Dallas, Milan and Bogota.

Behind the scenes, Healy is now working with the high-profile arts consultant Michael Kaiser to cut Canadian Stage’s long-standing $1.6-million deficit in half this year, in half again the next year, and then completely eliminate it by the end of 2021. “Once you get rid of that deficit, you can start to think about your facilities and start to think about some big pivots,” he says.

As for Canadian Stage’s attendance, which sits around 85,000 a year and was matched and surpassed by Soulpepper during Jocelyn’s time, Healy believes there’s a “huge opportunity for growth."

“I’d like to see more people coming and more different kinds of people coming,” he says. “For me, Canadian Stage is one of Toronto’s major cultural institutions – and I would love for it to live in the hearts of all Torontonians the way the AGO does, the way the ROM does.” 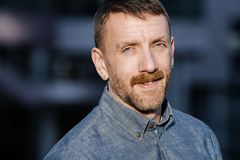 Brendan Healy stepping down as artistic director of Buddies in Bad Times
March 11, 2015 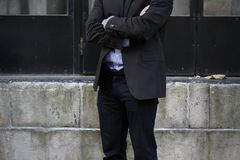 Vanessa Porteous, Brendan Healy
September 27, 2010
Follow J. Kelly Nestruck on Twitter @nestruck
Report an error Editorial code of conduct
Due to technical reasons, we have temporarily removed commenting from our articles. We hope to have this fixed soon. Thank you for your patience. If you are looking to give feedback on our new site, please send it along to feedback@globeandmail.com. If you want to write a letter to the editor, please forward to letters@globeandmail.com.
Comments