Toronto’s Factory Theatre is belatedly kicking off its 2020-21 season this week with the world premiere of a play created specifically to be livestreamed called acts of faith by David Yee.

This new solo show was written to be performed by Natasha Mumba, a familiar face from Toronto theatre and the Shaw Festival who, in another universe free of COVID-19, would currently be acting in the Canadian production of Harry Potter and the Cursed Child that was to open in Toronto this fall.

In acts of faith, Mumba plays a young woman named Faith who is mistaken for a prophet in a story that, according to the theatre company, ranges from the “African Copperbelt to the backwoods of Muskoka.”

She’ll be giving her performance live from Factory Theatre’s rehearsal room, which has been transformed into a studio, six times over two weeks starting on Thursday at 7:30 p.m. EST.

Factory’s artistic director Nina Lee Aquino, a frequent collaborator of Yee’s, is the director of the stream – and if you’re looking to brush up on Yee’s work in advance, his Governor-General Award-winning play carried away on the crest of a wave was adapted for the PlayME podcast earlier this year.

Tickets for acts of faith are free – you just have to register in advance on the Factory Theatre website. Look for my review later this week.

The question of whether online theatre offerings should be free has been a hotly debated topic during the pandemic. There’s been some concern that performing arts companies are walking into the same long-term trap that newspapers did earlier this century – and that making theatrical content free will make it hard to lure back paying customers in the future.

Some not-for-profit performing arts companies, however, are seeing free as the future of theatre even after COVID-19 is under control.

Talk is Free Theatre in Barrie, Ont. is the latest – and most prominent to date – in Canada to experiment with eliminating ticket prices. The professional company run by Arkady Spivak announced this week that it has committed to free admission to its core programming over the next three years in order to “engage an even more diverse range of patrons.”

Here’s how it’s going to work in Barrie: Those who book a ticket in advance will be required to pay a deposit ($25 for most; $15 for students) – and those who attend the show (or cancel up to four hours before curtain) will have that deposit returned in full. No-shows will have their deposit turned into a donation to the theatre and be issued a tax receipt.

Talk is Free Theatre follows the Highland Arts Theatre in Cape Breton, which has successfully raised money in the community to replace ticket revenue going forward, in going free during the pandemic but they are not the first free theatres in Canada. Toronto Free Theatre, for instance, launched in 1972 without charging admission, though that didn’t last for long. TFT’s co-founder John Palmer died earlier this year and you can read more about his life and work in my obituary of him.

A favourite musical revue of mine from the early 2010s returns online this week. Do You Want What I Have Got? A Craigslist Cantata, created by Veda Hill, Bill Richardson and Amiel Gladstone based on real-life Craigslist ads, was born at the PuSh Festival in 2012 and then had a successful Canadian tour. (Here’s my 2013 review.)

The show’s creators have updated the material and adapted it to be live-streamed – which it will by a new cast (Meaghan Chenosky, Josh Epstein, Chirag Naik, Amanda Sum and Andrew Wheeler) from The Cultch in Vancouver for five performances from Thursday to Sunday.

This one you have to pay for: $29 for a solo viewer; $58 for a bubble. There are unusual performance times, so you should be able to find one that suits your time zone no matter where you are in Canada – but I’ll be staying up late in Toronto on Thursday to watch the opening-night show at 7:30 PST. Look for my review online Friday.

Tarragon Theatre’s latest offering as part of its Tarragon Acoustic season is the Canadian classic 7 Stories by Morris Panych.

The title of this 1989 comedy that helped make Panych’s name has two meanings: It takes place on the outdoor ledge of an apartment building seven storeys up, where an unnamed man has his suicide attempt interrupted by seven different stories that burst out of the windows around him.

I haven’t yet had an opportunity to listen to the Tarragon’s audio adaptation directed by Courtney Ch’ng Lancaster and Kimberley Rampersad, but one of my absolute favourite comedic actors, the Stratford Festival’s Tom Rooney, is in it, so I’m looking forward to catching up on it. You can read my review of the 20th anniversary production that played at Theatre Calgary and Canadian Stage here.

This ticketed audio production is available on demand through the Tarragon Theatre website until Nov. 26 – and is also going on tour to the Centaur Theatre in Montreal and Great Canadian Theatre Company in Ottawa. 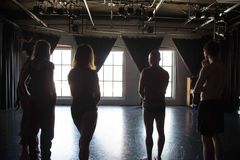 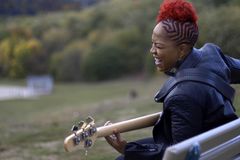 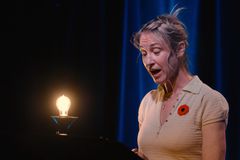