At the Dora Mavor Moore Awards at the Sony Centre for the Performing Arts on Tuesday night, School Girls; Or, the African Mean Girls Play was selected as the outstanding production in the general-theatre division of the city’s annual performing-arts awards.

The comedy by the American playwright Jocelyn Bioh made its Toronto premiere at Buddies in Bad Times Theatre. Filipina-Canadian playwright-director Nina Lee Aquino, who helmed the Obsidian Theatre/Nightwood Theatre production, picked up the prize for her outstanding direction.

Also on the general-theatre side of the awards, playwright Charlotte Corbeil-Coleman’s Guarded Girls, a maximum-security drama at Tarragon Theatre about four female prisoners, was chosen as the year’s top new play. Each of the four nominated playwrights up for that award were women.

This was the first year the Doras’ individual acting awards went gender-neutral. Both winning actors in the general-theatre division were women. Virgilia Griffith was judged the best performer in a leading role for her commanding turn as a betrayed wife in Djanet Sears’s rhapsodic blues tragedy Harlem Duet at the Tarragon. Amaka Umeh picked up the trophy for top performance in a featured role as one of the players on a teenage girls soccer team in Sarah DeLappe’s The Wolves, a Toronto-premiering production of Howland Company and Crow’s Theatre.

The production that tallied the most Dora wins was in the opera division. The Canadian Opera Company’s presentation of Robert Carsen’s 21-year-old production of Eugene Onegin tallied five trophies, including ones for best production, stage design, costumes, lighting and direction.

Three-trophy winners included Soulpepper’s superbly staged boxing drama The Royale and Christopher Morris’s The Runner, which won for best production, direction (Daniel Brooks) and top new play in the independent theatre division. Morris’s play is about a member of an Israeli volunteer rescue and recovery team.

Although Soulpepper’s Rose also came away with three trophies (including the prize for outstanding new musical), the haul might be seen as a disappointment, given the show’s surprising, pack-leading 11 nominations. Rose’s Peter Fernandes was voted top performer in a featured musical-theatre role.

Also in the musical-theatre division, the Musical Stage Company’s Next to Normal won for top production and best leading-role performance (Ma-Anne Dionisio).

The night’s biggest loser was the Mirvish song-and-dancer Dear Evan Hansen, which converted its nine nominations into just one trophy (for lighting design). Fortunately, many of the cast members and production team were busy at the Royal Alexandra Theatre, where the musical runs until July 21.

In the independent-theatre division, rising Venezuelan-Canadian star Augusto Bitter took the outstanding-performance prize for his pizzazz in his one-hander about language, sexuality and identity, Chicho.

Because their performances change from show to show, improvisational artists often do not receive proper acknowledgment at the Doras. This year, however, the extemporaneous crew that put together the holiday-themed The Wonder Pageant at Coal Mine Theatre was judged best ensemble in the independent-theatre division.

In the dance division, Blood Tides – performed by Kaha:wi Dance Theatre and presented by DanceWorks – won for outstanding production. Andrea Nann was picked by jurors as the year’s top performer for her work in A Crazy Kind of Hope (All of Our Dreaming).

See the full list of all the Dora winners here.

Editor’s note: An earlier version of this article incorrectly said actor Gord Rand was not nominated for a Dora Award. In fact, he was nominated for Outstanding Performance of an Individual for his work in The Runner. 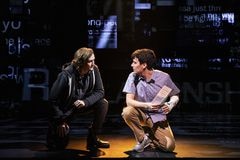 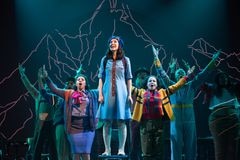