Marcus Youssef, the Siminovitch Prize-winning playwright who is based in Vancouver, was in the audience at Ontario’s Stratford Festival this summer when he had an encounter that led to some deep questioning, a bit of shame and ultimately a lot of clarity. A couple sitting nearby at that matinee recognized him from Vancouver. This was exciting and unexpected – how often does a playwright from Vancouver get recognized at Stratford? When he answered in the affirmative, they gushed about a play he had written that they had seen last year. It was East Van Panto: The Wizard of Oz.

The Panto, now in its seventh year, is a family-friendly musical that takes a well-known story and songs (this year’s Pinocchio offers everything from Lizzo to Andrea Bocelli, thanks to musical director Veda Hille) and adapts them to both send up and pay homage to the weird and wonderful world that is East Vancouver. We East Van types (this neighbourhood is home for me), recognize ourselves in it and its operating-at-two-levels jokes. It has become a favourite holiday tradition, even drawing audiences from outside the neighbourhood. What began as a three-week run now goes for seven. Performances started a week earlier this season to accommodate anticipated demand.

So the couple in Stratford was telling Youssef last summer how much they loved the Panto; they thanked him for it. And then, as other people in the audience got involved in the conversation (this is Stratford; people are interested in all things theatre), the initial couple checked themselves.

“They sort of stopped and they looked at me and they said, oh, but you probably don’t want to talk about that, and gestured sort of toward the Stratford stage,” Youssef recalled during a recent interview at his East Vancouver home. “And I went, what? No I’m thrilled to talk about it; I love the Panto.”

Youssef continued to recount the conversation: “They were like ‘well, it isn’t your serious work.’ And then I felt this kind of shame.”

Artistic director at Vancouver’s Neworld Theatre for 15 years (where he is now “senior artist”), Youssef has a long CV, having written or co-written about 15 plays. Highlights include King Arthur’s Night, commissioned by Luminato; the youth-targeted Jabber – playing in three German cities as we were talking – and Winners and Losers, a critical darling that had an off-Broadway run. His co-creator in that endeavour, James Long, co-won this year’s $100,000 Siminovitch Prize for directing with Maiko Yamamoto. They are co-artistic directors at Theatre Replacement, which produces the Panto. (It’s presented by The Cultch at its York Theatre.)

In the playwright’s note in this year’s Panto program, Youssef reveals that writing the show these past two years (writers and directors switch out every two years) has been one of the most joyful creative experiences of his career. And yet.

“I became self-conscious,” he recalls about that Stratford conversation. “And thought, oh no, am I doing something lesser? Am I selling out?”

Youssef has thought about that moment a lot – in particular in this current holiday season, as he has just premiered two holiday plays in Vancouver.

There is this year’s Panto, Pinocchio, directed by Stephen Drover. A lonely old ice-cream vendor named Gelato (Shawn Macdonald), who desperately would love a child, instead gets a puppet from an oddball local store. When the puppet (Pippa Mackie) comes to life, she is warned by the Fairy Instagram Mother (Chirag Naik, on a lit-up hoverboard) that he won’t really be real until he gets 100,000 followers on social media.

Youssef also premiered a play at the Arts Club Theatre Company in November. It’s a Wonderful Christmas-ish Holiday Miracle borrows from ideas in the Christmas classics It’s a Wonderful Life and A Christmas Carol and brings the holiday angst into contemporary times. A divorcing couple and their two children are dealing with their first postsplit holiday season. Mom Miriam (Jennifer Lines) is suddenly interested in also celebrating Hanukkah after the death of her mother the previous year. But then her mother, Esther (Nicola Lipman), comes back from the dead to try to tie up some loose ends.

The timing is purely coincidental; Youssef certainly didn’t set out to launch two holiday plays in the same week. But the relationship between the two works goes beyond the Christmas connection: Holiday Miracle was in some ways inspired by his own experiences in his family of origin; the Panto is very much about the community that has become a family in many ways.

We spend most of our interview talking not about these two works, but about the value ascribed to something simply because it holds a kind of codified cultural importance – a play at Stratford – and the reverse of that – a Christmas musical. As if there were some sort of hierarchy of significance.

“I’ll confess to feeling like sometimes ‘Oh is this not worthy of having won [the Siminovitch] Prize?’ Am I not supposed to now be doing [this kind of work]?” he says. He also admits to insecurities about becoming known as that Christmas guy.

But he has ultimately decided: “Why limit the range of work I try to tackle, out of fear of not looking cool or being pigeon-holed?”

Youssef has many other projects on the go. He and Long are working with filmmaker Mina Shum to adapt Winners and Losers. There is a show, The Democratic Set, coming up at the PuSh International Performing Arts Festival. He is writing a play about a group that sponsors a Syrian refugee. King Arthur will have another run next year. And this spring in Vancouver and Kamloops, Youssef will be playing the role of Globe and Mail writer Ian Brown in a theatrical production of The Boy in the Moon, Brown’s memoirs about his disabled son.

But we keep coming back to that question, the one that has haunted him this fall like the ghost of Stratford Festivals past. What in the theatre has value?

In Vancouver, East Van Panto: Pinocchio is at the York Theatre until Jan. 5. It’s a Wonderful Christmas-ish Holiday Miracle is at the BMO Theatre Centre until Dec. 22. 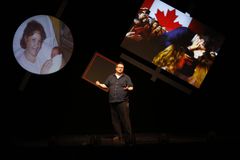