At first glance, Hannah Moscovitch’s new, post-#MeToo play, Sexual Misconduct of the Middle Classes, seems counterintuitive, maybe even reprehensible. It’s the story of a relationship between a middle-aged male professor and a 19-year-old female student – told from the professor’s point of view.

Just hold on a sec. Haven’t we already heard the male version of this story, ad nauseam? Wasn’t the #MeToo movement all about wresting the narrative away from those in power and giving it to the powerless, the victims?

But wait for it – Moscovitch’s play, opening this week at Toronto’s Tarragon Theatre, contains a twist. We won’t give it away entirely, but here’s a hint: It may be written from the man’s perspective, but Moscovitch is the one writing it.

Thanks to #MeToo, “there’s been a shift in who gets believed and who gets to tell the story,” says the much feted and ever provocative playwright. “In this play, a woman gets to tell the man’s story – she’s the one in control.”

In Sexual Misconduct, the professor, Jon, a thrice-married, successful author suffering from midlife angst, finds himself attracted against his better judgment to Annie, a shy and admiring young undergraduate. The huge power differential between the two may remind you of Oleanna, David Mamet’s notoriously divisive 1992 sexual-harassment drama involving a timid female student and a pontificating male prof.

“I definitely had Mamet in my mind,” confirms Moscovitch, dressed all in black, perched on a comfy chair in one of the Tarragon’s spartan playwrights’ offices. Now 41, she figures she first read Oleanna as a student at the National Theatre School in Montreal. “It’s extraordinarily well written and yet it didn’t reflect my experience as a woman at all,” she says. “For me, it doesn’t tell the truth about what happens between men and women.”

Partly as a response, she began crafting Sexual Misconduct in 2014. It had its first public reading at Seattle Rep in the spring of 2017, just months before the sexual-abuse allegations against Hollywood mogul Harvey Weinstein hit the headlines and ignited the #MeToo campaign.

Moscovitch got a foretaste of it there. “When we did the reading, about 40 or 50 women waited around afterwards to tell me that they had had a similar experience,” she says. Moscovitch herself has stories she could tell. “I’m in the same industry as Harvey Weinstein,” she points out. Not to mention the same theatre community that saw former Soulpepper Theatre artistic director Albert Schultz ousted over allegations of sexual harassment.

She admits it still feels dangerous to be openly discussing the kind of behaviour that was once only whispered about in women’s washrooms. “Talking about it now, I feel sick and scared all the time,” she confides. “Sick and scared, but happy. It feels so good to tell the truth and that is what this play is meant to do.”

Openly talking about sexual abuse is part of the larger cultural shift in which women’s hitherto hidden experiences are being discussed and validated. It’s reflected in Moscovitch’s most recent writing. The Ottawa-born playwright, who began her career writing plays far removed from her own life, about Nazis in Paraguay (East of Berlin) or soldiers in Afghanistan (This is War), is now focusing on more personal and domestic subjects. Bunny, her 2016 Stratford Festival debut (remounted by the Tarragon in 2018), dealt candidly with a young woman’s sexual hunger. Last season’s buzz-generating Secret Life of a Mother – returning for an encore in February at Crow’s Theatre – laid bare her own maternal difficulties. (She has a son, Elijah, who is now 4.)

“Right now, there’s such a revolution for women happening that these pieces feel more political than they do personal and domestic,” Moscovitch says. She’s also finding a demand for them, by both theatres and audiences, like she’s never encountered before.

“The level of audience response is just so crazy when I write plays for women,” she says. “People write me letters by hand and push them under my door. I think women want plays that are about their experience of the world. And just writing about women, you’re original by default, because nobody’s been writing about this in the theatre before.”

Sexual Misconduct reunites Moscovitch with her Bunny collaborators: director Sarah Garton Stanley; designer Michael Gianfrancesco; and actor Matthew Edison, who plays Jon. It’s one of two Moscovitch shows to be seen this season at the Tarragon, her home base in Toronto. Last season’s widely embraced Old Stock: A Refugee Love Story will be playing a return engagement in the summer.

The touring chamber musical, created by Moscovitch with her husband, director Christian Barry, and singer-songwriter Ben Caplan, has proved a runaway success for Barry’s Halifax-based 2b Theatre Company. This year, it will travel to Poland, Moscow, Shanghai and Washington, as well as continuing to tour across Canada.

The prolific Moscovitch also has plenty of new work in progress, from plays to opera librettos to television scripts. Her most ambitious project may be her three-part stage adaptation of Ann-Marie MacDonald’s sprawling bestseller Fall on Your Knees. Co-created with MacDonald’s wife, director Alisa Palmer, it’s been nine years in the making and could premiere as soon as next season.

With more women’s stories being told – and being told by women – does Moscovitch think Canadian theatre is finally achieving gender parity? “I think we’re getting closer, for sure,” she says. “I feel more optimism now than I have ever felt in my career. Artistic directors don’t ask me any more, ‘Why is this relevant?’ Now, it’s obvious.”

Sexual Misconduct of the Middle Classes runs through Feb. 2 at the Tarragon Theatre in Toronto.

Editor’s note: (Jan. 7, 2020) An earlier version of this article incorrectly stated that Moscovitch's adaptation of Fall on Your Knees is being jointly produced by three organizations. In fact, it has no producers yet. This version has been updated. 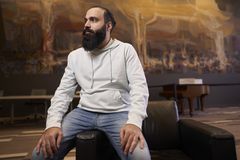