If you mourned the cancellation of Harbourfront Centre’s 30-year-old World Stage Festival in 2018, there’s good news on the Toronto waterfront. Torque, an international dance series opening its second season this fall, picks up on much of its predecessor’s vision. The series focuses on choreography, but the programming continues in a similar spirit to World Stage, bent on bringing exceptional and thought-provoking artistry from across the globe to Toronto audiences.

When I caught Torque artistic director Nathalie Bonjour on the phone last week, she was in Amsterdam, seeing the work of Norwegian choreographer, director and award-winning playwright Alan Lucien Oyen. Oyen is a multidisciplinary artist establishing a prominent name for himself in Europe. A little indication of that prominence: Tanztheater Wuppertal Pina Bausch chose Oyen to create the second full-length work for the company in the wake of Bausch’s death. His Bon Voyage, Bob toured across Europe and was noted as an emotional and visually entrancing production.

So it’s no surprise that Bonjour is particularly excited to open Torque in October with Oyen’s 2017 Simulacrum, a work that pairs an 80-year-old Japanese Flamenco artist with a Kabuki dancer. “It’s a very unusual piece, a very beautiful piece – it really sort of blows your mind! They’re both amazing performers,” she says of the Flamenco-Kabuki coupling. “And it’s also incredibly theatrical. It’s both their personal stories told through movement and text.”

In addition to World Stage, Torque flows from another defunct Harbourfront festival, Next Steps, which focused exclusively on dance. Torque is meant to retain the best features of both, supporting the local dance ecology in the vein of the latter, while maintaining the former’s international perspective. Bonjour is confident that there’s a broad audience for contemporary dance in the city, and says that Torque’s first season reflects this. “We sensed an interest in the work and the way we presented it – focusing on choreographers that have a really interesting voice and that come up with shows and ideas that are memorable, shows that stay with people.”

The festival also goes much further toward assisting Canadian choreographers through a robust residency program. Next season, they will have six dance companies in residence, some of whom will eventually have their work presented by Torque. The Mohawk choreographer Barbara Kaneratonni Diablo will begin her residency at Harbourfront this fall with her company A’nó:wara Dance Theatre. In May, 2020, the fruits of this process will be presented at Harbourfront’s Fleck Dance Theatre, with two performances of Sky Dancers: Bridges, about a Quebec bridge disaster that killed 33 Mohawk iron workers in 1907.

Bonjour likes to think of herself as a conduit between artist and audience. “I think one of the toughest messages in dance, one we hear all the time, is ‘I don’t get it.’ But that’s okay!” she says. She wants audiences to move away from literal analyses so that they can embrace the abstract and let themselves be transported. “There’s always something that’s happening on stage that speaks to the human condition, how we relate to one another, why and how we develop emotions.”

Details and dates are available at harbourfrontcentre.com/torque/. 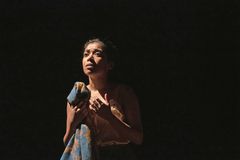