Come From Away may still be grounded in Toronto, New York and London due to COVID-19, but the hit Canadian musical is once again flying high – in the Swedish city of Norrkoping.

Last weekend, Ostgotateatern, Sweden’s largest regional theatre, opened the Nordic premiere of Irene Sankoff and David Hein’s kind-hearted show about the hospitality received by nearly 7,000 plane passengers diverted to Gander, N.L., on Sept. 11, 2001. The run is already completely sold out. The caveat: Due to pandemic restrictions, only 50 spectators are allowed at each performance.

Come from Away’s such a big show here – probably the biggest show to come out of Canada ever – so I had to find out more about your production.

It’s really an extraordinary hit all over the world. We’re all quite pleased that it’s not only the people from the U.S.A. and from Great Britain that can write musicals. We were all so happy when we found this great piece and, “Okay, so it’s not by Americans, it’s by Canadians.”

Yours is not just the first Swedish production of Come From Away, but the first production anywhere without the original creative team involved.

In Sweden, it’s very rare that the original team comes over. I think it only happened with The Phantom of the Opera and the original production of Les Misérables back in 1991. I was so honoured to be able to direct – but also a bit scared because I felt that I don’t want to ruin what’s beautiful.

How long has your production been in the works?

I was the one trying to convince the theatre that Come From Away was a musical that we should go for. Once I presented the material, they really jumped on it and contacted the right-holders. That was back in 2018. It’s bad or good timing [for it to open] with COVID-19 and all that, but it’s actually a story that we need to be told: that when the crisis hits us, that we are there for each other.

How difficult was it to translate Newfoundland dialect and all those colourful Newfoundland expressions into Swedish?

You’ve kept the title, Come From Away, in English. Is there an equivalent Swedish expression?

It is a very good title. We tend to keep the English titles many times in Sweden because we are all anglophiles here. “The people who came here” [in Swedish] is what we use in the show. That’s the difficult thing about translating – making up expressions and making them feel alive.

How were you able to research Newfoundland during COVID-19?

I was hoping this summer to go to Newfoundland, but of course, I couldn’t; when corona struck, everything just paused. So thank God for YouTube and the internet and all the material posted by the original team.

I saw a photo with the cast all in those yellow fishing hats from Newfoundland. Were those difficult to get?

We have them in Sweden as well. There are a lot of fishing societies in Sweden. Other things were more difficult to source. Of course, we had to make the ugly stick [a traditional Newfoundland musical instrument made out of household objects]. I must say it’s a beautiful thing.

There’s very little theatre going on in North America right now. What is happening often has smaller casts, and singing is not allowed on stage in a lot of places.

Every theatre in Sweden had to make their own decisions. How can we work? Can we perform at all? Our theatre decided that, yes, since we are allowed to perform, we should. It’s also a governmentally funded theatre, so there’s also a certain responsibility to actually use the money for the good of the people.

How did the rehearsal process work?

If someone had a small little runny nose, they had to go home. They had to be symptom-free for 48 hours before they were allowed to return. We usually rehearse our swings [standby performers] later in the process, but this time, from day one, they needed to be ready to go on because we were lacking people all the time. It actually has been all about solidarity and helping each other in this show as well as in the story we are telling, which was kind of beautiful on a meta level.

Is this the first big musical to open in Sweden since the pandemic began?

The Malmo Opera is showing Funny Girl at the moment, and that is also an extraordinary experience in an auditorium with 1,500 seats and there are 50 people allowed. Most of the governmentally funded theatres are performing, but the private producers can’t afford to put on a show right now.

That’s the big discussion we’re having in Sweden right now. At the restaurant, you’re allowed to have 200 people, and the trains and buses are allowed to have full capacity. But in the theatre – you can have a big hockey rink, you can have a stadium – but you’re still just allowed 50 people to watch it. I think that’s the case in the whole world right now – everyone is trying to figure out: How can we sort this out? How can theatre survive? 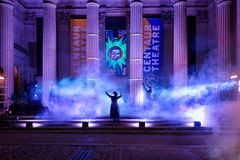 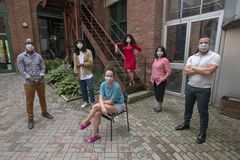 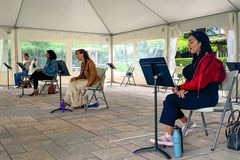