My heart dropped on Tuesday upon hearing the news that the Luminato Festival Toronto was moving its mostly online 2021 edition to October from June – and I’m sorry to say my first reaction was: Why not cancel instead?

The decision to push programming that chief executive officer Celia Smith describes as “a dynamic series of film and digital experiences” back to the fall because of the third wave of COVID-19 is certainly perplexing from the outside. I would have expected the international multi-arts festival – which has made its biggest impact with live, often large-scale performances and immersive installations – to put its resources and energy into coming back full-tilt with in-person shows and events in 2022 if it couldn’t pull something virtual together for its usual calendar slot.

October is a month when Toronto has a number of other festivals jostling for attention – Nuit Blanche most notably. It’s also when the city’s theatre, dance and opera companies traditionally blast back to life once the Toronto International Film Festival has breezed out of town.

This year, those festivals and organizations will need all the support and publicity they can get as they attempt to emerge – fingers crossed – from dormancy or the digital realm to resume in-person events and performances indoors and lure tentative audiences back.

Won’t Luminato be stepping on toes? Smith tells me that, on the contrary, her festival is collaborating with a wide number of these local theatre, dance and music organizations (though she won’t name them to preserve a reveal planned for June). She sees Toronto’s arts and culture scene not as “competitive” but “collaborative.”

I’d say that has always been a blind spot in the Luminato office – as if the demise of the somewhat similar World Stage festival had nothing to do with a competitor’s creation in 2007, or as if having Luminato’s opening weekend the same time as the Stratford Festival each June hasn’t taxed the dwindling arts media and resulted in thinned out coverage.

The situation is definitely dire in Ontario now, but we can look to the United States (where Cirque du Soleil has put tickets on sale for Las Vegas shows at the end of June) and Great Britain (where indoor venues will be allowed limited audiences as of May 17) as an indicator of where things might be after a couple more months of vaccinations.

Or we can just look next door to Quebec to see what is possible in the not-for-profit world even now, with a united performing arts industry pressing to be treated on par with the film and television industry.

Indoor, in-person performances have been held in Montreal for the past month, and on Tuesday this week, Festival TransAmériques – that city’s most Luminato-esque festival – announced a slate of live, in-person programming, indoors and outdoors, that it hopes to put on at the end of May and into June.

It’s not Pollyannaish to imagine that Toronto is headed in these directions. There are already plans for outdoor shows in town this summer from Musical Stage Company and Canadian Stage – and the nearby Stratford Festival should be able to move ahead with its six-play season under canopies at some point.

For Luminato to be planning an almost entirely digital festival for October in this context only makes sense in a worst-case scenario where vaccination has failed because of a resistant variant.

So, you can see why my heart dropped.

I understand how Luminato ended up landing here after talking to Smith. Last summer, its organizers started working on producing what she describes as an “all free, all outside, all over the city, all local talent” edition in June of 2021. (This would have been wonderful!)

By January, 2021, however, Smith and her colleagues realized that in-person, outdoor events might not be allowed even with just 100 or 50 physically distanced audience members present. At which point, according to Smith, they asked themselves: “How can we do this work and still keep the integrity of the work and intention of the work and the impact and film it?”

Luminato then set about engaging film production companies to work on that pivot with the intention of filming work to present in June – until a week ago, when the province seemed on the verge of meltdown amid rising case counts and overflowing ICUs.

“It became obvious that if we wanted to be responsible and take the safety of our artists and our creators and our production team as the top priority, and recognize the dire situation that the province is in, we would shift everything to the fall,” Smith says.

Hence the new plan to film Luminato’s programming in September and early October and release it in mid-October. “I don’t think it’s acceptable to push things off a whole year, I think the world needs to see this work,” Smith says.

While I feel for the team and the artists who have been planning these projects, ultimately this seems a pivot too far. And unfortunately, moving the festival to what is starting to look like an overcrowded fall of reopenings ultimately reraises questions that have dogged Luminato about its purpose and focus since it was created.

The advice Kenny Rogers sings in The Gambler is as applicable to the organizers of arts festivals in the COVID-19 pandemic as it is to poker players. You’ve got to know when to hold them, and know when to fold them. 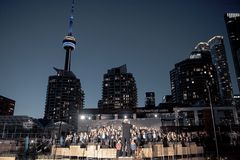