Scandal has a way of turning into legend, at least in the arts. Sholem Asch’s 1906 Yiddish play God of Vengeance was assured of notoriety after the entire cast of the 1923 Broadway production was charged and found guilty of “participating in an obscene, indecent, immoral and impure drama.”

Pulitzer Prize-winning playwright Paula Vogel’s aptly titled Indecent, which has its Canadian premiere at Montreal’s Segal Centre on April 28, revisits God of Vengeance’s turbulent history, as well as its footnote fame as the first Broadway show in which two women exchanged a passionate kiss.

Indecent, which Vogel developed with stage director Rebecca Taichman, premiered in 2015, and opened on Broadway two years later. Many other theatres have since lined up to perform it, including Toronto’s Mirvish Productions, which will stage it next season.

Asch’s play, set in a Russian town, tells of a Jewish couple named Yekel and Sarah, who try to keep their daughter Rifkele chaste while Yekel runs a brothel downstairs. He seeks to purify the avails, and attract a respectable bridegroom, by commissioning a scribal copy of the Torah. His hopes turn to despair, however, when Rifkele runs off with one of his sex workers, Manke.

Indecent spans the play’s origins in the Yiddish literary scene in Warsaw, its production by the legendary Max Reinhardt in Berlin, and its fateful appearance, after many intervening productions and translations, on Broadway. Fearing prosecution, the New York producer excised all evidence of an intimate relationship between Rifeke and Manke.

Vogel shows the cast protesting the cuts, which transformed Manke’s interest in Rifkele into a merely mercenary desire to draw her into prostitution. “You cut the love scene between these two girls,” exclaims Lemml, the loyal stage manager. “There’s only sex left!”

Vogel, who is gay, has said that the women’s relationship in God of Vengeance is “equivalent to Romeo and Juliet.” She further enhances her play’s place within LGBTQ theatre by showing the women who play Manke and Rifkele also falling in love as they rehearse their intimate scenes.

“But this isn’t a political play, to push LGBTQ,” says Lisa Rubin, executive and artistic director of the Segal Centre and director of Indecent. “It’s a play in which love between two women is as pure as any other love.”

Indecent skips freely between scenes in different times and places, with klezmer-like music at every scene transition.

“I told the actors to imagine that this troupe decided to write a story, and picked the most important parts they want to share,” Rubin says.

Vogel pointedly anoints Lemml, a presumably straight man, as the play’s most ardent defender. His life is changed by what its first English translator called its “moral beauty” – unlike orthodox Jewish critics when the original version first played New York in 1907.

Under the title Filth and Vileness on the Yiddish Stage, one review in a Yiddish paper condemned Asch for representing Jews involved in sordid commerce, thus providing fodder for anti-Semites. Indecent includes a scene in which a rabbi tells his congregation that seeing The God of Vengeance reach Broadway was like being hit “by a stone in my back by a fellow Jew!”

“You understand why the rabbi has this very compelling sermon,” Rubin says, “but in the rest of the play you see the artists fighting for something they believe in.”

Ironically, it was a wave of anti-Semitic violence across the Russian Empire in 1881 that gave educated Jews reason to see Yiddish not just as a low popular tongue, but as a vessel for Jewish arts and survival. Asch was part of the second generation of the Yiddish literary revival, following Sholem Aleichem and I.L. Peretz. In Indecent, Peretz advises Asch to stick to “plays that represent our people as valiant, heroic,” and to burn God of Vengeance.

The tragedy of Yekel’s desire to keep the pure safe from the impure, a central theme for Asch, has almost vanished in Indecent. Vogel even amplifies the character’s brutal side, by having Yekel shout: “You know what this Torah cost? It cost all of the whores downstairs on their backs and their knees for a year!”

There are only three scenes from Asch’s play in Indecent, each of them liberally adapted by Vogel. “Paula told us that she chose those scenes because it was important to her to show the violence against women,” Rubin says.

In short, Indecent is very much a play for today, even while it presents a vivid slice of theatrical history. Perhaps it will lead to more productions of God of Vengeance, a century-old drama that takes a very forward-looking attitude toward love.

Indecent plays Montreal’s Segal Centre for Performing Arts from April 28 to May 19. A Yiddish reading of God of Vengeance will be given by the Dora Wasserman Yiddish Theatre at the Segal on May 5.

After ruling the roost at Blyth Festival, a play about pigeons flies the coop to Ottawa’s NAC
Subscriber content
April 23, 2019 ‘A play about a band, starring that band:’ Montreal indie group Stars to perform in concert/theatre hybrid at Crow’s Theatre
Subscriber content
April 18, 2019 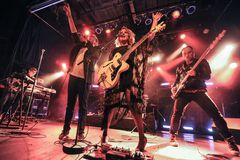 Opera star Angel Blue’s journey to the top is a story of faith, talent and luck
Subscriber content
April 17, 2019 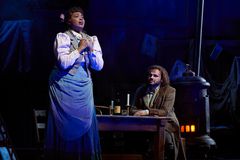