When the Canadian artist Joyce Wieland died in 1998, she left behind a lot of stuff in her house in Toronto’s east end – evidence of a creative life, detritus or raw materials, depending on your point of view. That stuff included flat slabs of marble the artist had collected at some point, perhaps thinking to use them in her work, although she was always known for her films, paintings and textiles, not carving or sculpture. More than 20 years later, that marble is finally being put to artistic purpose, but perhaps not in the way Wieland might have imagined.

“It’s run-of-the-mill marble, the kind used for kitchen counters,” said performance artist Hazel Meyer, who is turning the story of the marble into a project investigating Wieland’s legacy. “You don’t see it and say, ‘Oh, I can carve a Michelangelo replica with that.’”

Nonetheless, Meyer wonders why Wieland collected it – and why nobody thought to preserve it after her death from Alzheimer’s at the age of 67. And those thoughts, about art, archives and garbage, are the inspiration for The Marble in the Basement, the show that launches the annual Progress Festival of Performance and Ideas on Jan. 30. It features some scripted action and some improvised, with three actors including Meyer herself, as well as a puppeteer: The marble is played by a puppet.

The 40-year-old artist, who established her career in Toronto but recently moved to Vancouver, has been intrigued by Wieland since childhood. She grew up in Ottawa and when she was about 9, she first saw Wieland’s most famous work at the National Gallery of Canada.

Created in 1968, it is a vibrant quilt on which the artist, inspired by the nationalistic optimism and Trudeaumania of the day, spelled out then-prime minister Pierre Trudeau’s evocation of REASON OVER PASSION in stuffed lettering. The colour and the humour, the folksy textiles and the apparently unironic embrace of the politician may have lead people to underestimate Wieland.

She was well-regarded in the 1960s and 70s both for her experiments with film, including manipulating the celluloid itself, and for her quilts, part of a feminist project adapting a traditional craft to fine art. Another well-known example of her work is a stuffed fabric hanging showing a herd of caribou that is located behind glass in the Spadina subway station in Toronto. However, after the 1970s, she was never elevated to the Canadian canon in the manner of her former husband, artist and filmmaker Michael Snow, and she was often ignored in the history of artists’ filmmaking.

As Meyer pursued the cheerful figure she had been introduced to in childhood, she discovered her politics and her anger.

“She was a lot more fierce than people give her credit for,” Meyer said. “Her interests were way more complex than we were lead to believe.” She points to a 1986 interview unpublished during the artist’s lifetime in which she is highly critical of Trudeau, in particular for invoking the War Measures Act during the October Crisis of 1970.

It was Meyer’s investigation of Wieland that led her to the marble. In 2012, she published Raisins Over Passion, a humorous zine paying tribute to the earlier artist; it came to the attention of Toronto publicist Jane Rowland, who was living in Wieland’s old house. Rowland invited Meyer over and, on the second-floor landing, the artist stubbed her toe on a piece of marble simply propped against the railing. “There’s more in the basement,” Rowland told her, and eventually invited her to take it away.

For Meyer, the heavy marble, mute, space-consuming and tough to move, seemed to symbolize difficult issues of artistic legacy … and storage.

“Is the value because it belonged to Joyce Wieland? If it was a handwritten note, would it have made it into an archive? I get it; no archive has room to store marble and I’m not suggesting that. … I’m thinking through accumulation and dispossession.”

Meyer’s larger artistic project investigating these issues is continuing – she calls it The Weight of Inheritance – but, for starters, the stone will speak.

The Progress Festival runs Jan. 30 to Feb. 15 at the Theatre Centre in Toronto. www.progressfestival.org 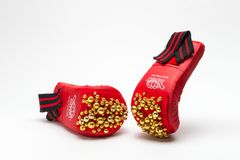 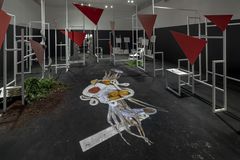