Three dancers in pale jumpsuits are sitting on a bench at the far end of a baseball diamond in Toronto’s Withrow Park. They begin to wave at the multigenerational crowd gathered on blankets and folding stools around them – funny, self-conscious waves that quickly intensify in speed and style. Some keener members of the audience wave back enthusiastically. No one’s quite sure how much participation is expected. As electronic pop beats from the speakers, the dancers rally the crowd into a rippling stadium-style wave, making a joyful collision of community and movement.

Dusk Dances, Toronto’s contemporary outdoor dance festival, marks its 24th year this summer and feels about as spirited as ever. There’s something both magical and apt about enjoying dance under an open sky. The al fresco setting hearkens back to modern dance’s origins; in the early 20th century, Isadora Duncan freed herself from the confines of traditional stages and studios, embracing nature and the natural and teaching her students in her backyard. Being among the elements adds another level of uncertainty: Audience and weather are free to do their own thing.

I attended on Tuesday night and we were only able to get through four works on the five-piece program before the rain started to descend. This is the first year that artistic director Sylvie Bouchard has invited a guest curator to program the festival; Toronto-based dancer and choreographer Michael Caldwell has built an evening around the theme of “collision.” Two of the pieces are festival commissions and world premieres, though the rain prevented me from seeing Poinciana, a contemporary tap piece for five dancers by choreographer Allison Toffan – a shame to miss as tap is rarely programmed at Dusk Dances.

The other commission is a two-dancer piece titled Oceanic Reach by the Toronto/Phnom Penh-based choreographer Peter Chin. It’s a title that could imply the expansiveness of Chin’s practice as a whole; he’s an artist who draws on a wide range of Southeast Asian styles – particularly from Cambodia and Indonesia – infused by his other eclectic interests and experiences, including tai chi and his childhood in Jamaica. Here he stretches his sphere even further, pairing traditional East African dancing with classical Indian Bharatanatyam, as though suggesting opposite shores of the Indian Ocean. Adding yet another culture to the mix, he’s set Oceanic Reach to music by 20th century Hungarian-Austrian composer Gyorgy Ligeti, which blares thunderously from the high speakers.

The work is performed by two compelling dancers, the intensely watchable Pulga Muchochoma of Toronto Dance Theatre (who maintains his own practice in East African dance) and Nivedha Ramalingam, an accomplished Bharatanatyam performer. It’s most interesting when they appear to react to the same stimuli – usually a musical crescendo – in their respective disciplines, so that we get a physical idea expressed in two languages side-by-side. Bharatanatyam is a discipline that makes use of a set vocabulary of facial expressions (called the Navarasas or Nine Emotions) and it’s fascinating to watch Ramalingam’s luminous expressivity up close, particularly when it softens in her interactions with Muchochoma.

Choreographer Tina Fushell’s Waving is Funny, the aforementioned opening number, is a clever and captivating piece that takes the idea of waving out of context and –like a sign deprived of signification – makes the convention seem rather strange. Performed with humour and a dose of irony by Fushell, Luke Garwood and Molly Johnson, the work looks like a stylish indie music video, an effect bolstered by Krista Dowson’s attractive and subtly funny pastel jumpsuits.

If the weather holds, you’ll be treated to some ferocious flamenco by Carmen Romero, who performs Uno Dos Y Tres dressed like a toreador, showcasing several impressive sequences of turns on the spot. The program also includes an atmospheric solo titled Alpha Compass, choreographed by Karissa Barry and performed in near darkness by Christoph von Riedemann.

No review of Dusk Dances would be complete without mention of its charismatic hostess, Allegra Charleston (Susie Burpee), who holds court in indigo polyester and adds even more light to this bright night of family-friendly dance. 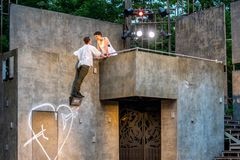 Review: A beautiful revival of The King and I still raises questions of appropriation
Subscriber content
July 14, 2018 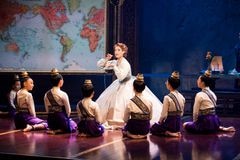 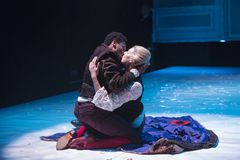