Mules is a new dark comedy about smuggling drugs in human bodies that doesn’t shy away from the gross-out details. Unfortunately, it, too, is hard to swallow.

Playwrights Beth Graham and Daniela Vlaskalic’s latest collaboration, now having its world premiere co-produced by Theatrefront and Hit & Myth in Toronto, begins with Crystal (Eva Barrie) and Cindy (Anita Majumdar) heading into a washroom at the Vancouver International Airport and blocking the entrance with a “cleaning in progress” sign.

In fact, they’re about to make it much messier.

Crystal has transported dozens of cocaine capsules to Canada from Colombia in her gastrointestinal tract – and Cindy is ready with the laxative, plastic gloves and baggies necessary to collect the goods on behalf of her boyfriend.

The two women are unlikely partners in crime. They both went to the same high school in Surrey, B.C. and live on the economic edge, but other than that have little in common.

Cindy is a foul-mouthed stripper who dabbles in drug dealing, while Crystal is a sweet single mother who works as a cashier at Safeway – and is clearly being taken advantage of.

Playwrights Graham and Vlaskalic have been collaborating on stories about women who get duped by criminals for two decades now.

The Drowning Girls, their play with Charlie Tomlinson about the true story of the three murdered wives of an English serial killer, first premiered at the Edmonton Fringe Festival in 1999 and has since become a Canadian theatre staple.

Mules, again, is an exploration of self-delusion – in female friendship, rather than romantic relationships this time.

It initially strikes a comic tone: Graham and Vlaskalic find plenty of humour in Crystal’s attempt to conquer her own hygiene hang-ups in this situation.

If you, like Crystal, are squeamish about scatological matters, be warned: While the delayed luggage emerges behind the doors of a bathroom stall and out of view in director Vikki Anderson’s production, the cleaning of the capsules takes place in a sink up close to the audience at centre stage.

If you’re the type of audience member who holds your nose at implausible plots, however, you may find this show too difficult to sit through.

Why are these two women doing a highly illegal activity in a building with perhaps the heaviest security in Vancouver? The original idea, we’re told, was for Cindy to pick up Crystal at the airport and take her to a nearby hotel – but Cindy, frustratingly, keeps giving her high school acquaintance (and the audience) the run-around when asked for an explanation why plans have changed to a public washroom.

It ultimately seems like the setting of Mules is a case of playwrights artificially raising the stakes to increase a sense of urgency. It backfires in this case due to a lack of believability.

While trying to keep a janitor (Tim Walker) out of the bathroom, the two keep lapsing into low-key conversations about their lives since high school. “We sorta lost touch after high school,” Crystal tells Cindy, while waiting to defecate. “What happened to you?”

Crystal may not run the fastest check-out counter in the supermarket, but it’s impossible to buy into the idea that she’d leave her beloved daughter with an acquaintance and go to Colombia to risk her life and liberty – without having at the most rudimentary of catch-up chats first.

Barrie nevertheless does a fine job of making the character’s extreme gullibility seem real and avoids stereotypical depictions of stupidity. She nearly holds the show together with a performance that is physically funny as needed, but still emotionally effective. Cindy, a compulsive liar, is harder to get a read on – and Majumdar hits the same nervous note repeatedly.

Realistic real-time drama is almost impossible to write without a little bit of contrivance – but the series of false endings (and cartoonish violence) make the final stretch of the show really not pass the sniff test. Mules probably shouldn’t have tried to cross the border from script to full production without getting its story straight first.

AGO’s Impressionism in the Age of Industry has a strong concept, but some notable works are absent
Subscriber content
February 20, 2019 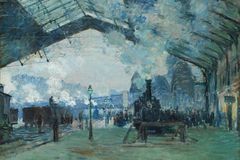 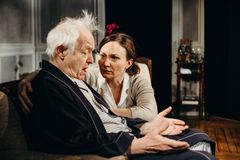 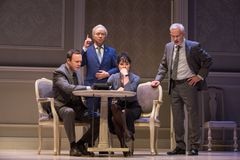