The more you ponder the organic marriage of music and dance in Orphée⁺, Against the Grain Theatre’s co-production with Opera Columbus and the Banff Centre for Arts and Creativity, the more you begin to understand the feast for the eyes and ears that would have been heaped upon opera audiences in the 18th century.

Gluck’s Orphée – first written in Italian in 1762, then revised in French in 1774 – is a telling of the famed myth of Orpheus and his journey to bring his recently deceased wife, Eurydice, back from the dead. Orpheus is given a pass to descend into the Underworld to retrieve Eurydice, on the condition that he not look at her until they are both back in the mortal world.

Orphée⁺ nods gratefully to the traditions of Baroque opera, and at the same time, treats those traditions with liberating irreverence. It’s an ensemble piece in creation, really, where one element of direction and design cannot be pulled apart from another. Stage director Joel Ivany imagines a world of sci-fi-burlesque-meets-David-Lynch, housed in S. Katy Tucker’s flexible sets and affective projections. Orpheus’s fear and wonder as he wanders through the Underworld are impressed upon us in John Gzowski’s sound design and JAX Messenger’s lighting.

All of this, in its decidedly modern aesthetic, is juxtaposed with two tips of the hat to the age of Gluck: the extraordinary costume design by Zane Pihlstrom and the eye-catching choreography by Austin McCormick. Baroque opera, particularly in France, was nothing without its ballet, and Gluck’s score is full of moments where dance is featured more prominently than any of the singers. Dressed deliciously in Pihlstrom’s burlesque designs, which pay homage to the Baroque years with gold heels and generous brocade, the six dancers of Company XIV are intimidating nymphomaniacs, gentle hosts and compassionate mourners.

There’s also room, among the rhinestone-studded dance belts, for empathy with the titular characters. Siman Chung’s Orpheus runs from lost to earnest to insane, a curious countering to Mireille Asselin’s Eurydice, whom we see only as wary, at peace and then with her peace disturbed by the confusing postmortem appearance of her husband. As he begins to lead her back to life, Orpheus’s blind, desperate grasp of Eurydice’s hand is intensely foreboding. Uneasy at his refusal to look at her, Eurydice makes you ponder just how much communication and trust is found in a look between lovers and how horrid it is to think of why one partner would deny the other simple eye contact.

The production has an ingenious arc to it. The first half is jam-packed with surprises – is that aerialist singing? Do I hear an electric guitar in the orchestra? – so that you can get over your shock in time for the crux of the drama in Acts III and IV. Orphée⁺ comes close to being a cacophony of things – boob glitter, animal masks, near-nudity – yet it’s saved by a zooming in on the simple humanity of Orpheus and Eurydice.

Most updatings of Baroque opera leave the orchestra intact. It’s a funny double standard, to consider the staging – even the text in some cases – open to interpretation, but the music untouchable. Against the Grain Theatre music director Topher Mokrzewski extends irreverence to the score – which has already been tampered with by Berlioz – in an arrangement by Lauren Spavelko that adds un-Baroque instruments such as electric guitar, and infusing into the written music Gzowski’s sound design. It makes for an evocative sound world, one that matches what we see. Still, listening to the new orchestration had me thinking of that Christopher Hitchens line that I paraphrase: Because it is our first attempt, it is our worst.

Taste aside, perhaps it’s with all this novelty that 18th-century audiences would have experienced Orphée. Gluck being a reformist composer, listeners would have heard novel sounds from the orchestra. Orphée is of the Baroque opera school that insisted on storytelling taking precedence over showy displays of solo singing, and that’s certainly what Ivany and his design team give us. The show zooms through its two hours in what feels like mere minutes, and the eye-candy look of everything ensures you’ll recall Orphée⁺ if ever you’re asked if you’ve recently seen some great theatre.

The production’s short Toronto run concluded on Saturday night, but it heads to Banff in July. 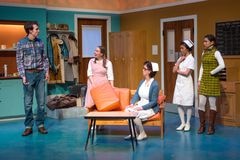 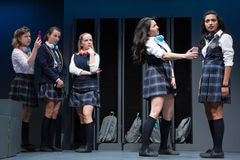