Anything I knew about puppetry I learned from Robax commercials, with its tortured, allegorical wooden mascot and its life-choice message that there is no pain so severe in one’s life that it could not be masked by non-steroidal anti-inflammatories.

With that in mind, I arrived at the small storefront studio of Ronnie Burkett to learn puppetry from the maestro of adult-theatre marionettes. The Medicine Hat-born Burkett will be mounting an ambitious new production, Forget Me Not, at this year’s Luminato Festival, where audience members themselves will each be asked to don hand puppets as part of the show. I dropped by Burkett’s space to gain an edge.

“First lesson,” he says to the photographer with me, who is shooting Burkett from an apparently unflatteringly low angle. “Never shoot an old gay man from below – ever,” he admonishes. “It’s all sagging.”

The playwright, puppeteer and puppet-maker is 62. If anything of his is sagging, it is neither his marionette strings nor his reputation. Framed magazine covers that feature him through the years take up one wall, pushing his actual trophies – yes, that’s a Siminovitch Prize in Theatre – to a nearby windowsill. The most wall space of all is given to books on puppetry – some 1,600 of them. Opposite them are scores of bins stocked with things for his creations: Lace and glitz, Plasticine, satin and chiffon, cotton balls, etc.

“It’s so easy, a monkey could do it,” Burkett says, handing me a pig-snouted boy marionette that he once used to portray a young Rob Ford. When he says that working the stringed puppets “looks complicated,” he is absolutely right. But within a minute of getting all my fingers in a wooden control bar, my little string-manipulated guy is walking across the floor, albeit awkwardly and rigidly. The puppet looks like it is in pain. Does it need some Robax? Do puppeteers?

“Oh, I have bursitis and tendinitis and all the itis-es that come with puppet control,” Burkett says with a sigh. Actually, by holding his customized hand-control bar at a certain angle and by keeping his arms raised in a manner to create the “table” from which he dangles and manipulates his creations, Burkett has avoided major physical issues.

Burkett’s new adult puppet play, Forget Me Not, is set in a world where written words and cursive style are outlawed. Love letters are a poignant act of disobedience. In a digital world, have we lost our love for things handmade and heartfelt?

“Puppetry is alive and well,” Burkett says, answering my question on that art form in particular. “My ear is to the ground, and I hear the distant rumblings of kids 10 and 12 and 14 years old. I think there is going to be a brave new crop coming up.”

It is Burkett’s concern that puppeteers older than kids but younger than him are storming out of theatre schools determined to present “deep, dark work” without first learning their skills. “They want to be artists right out of the gate,” he says.

There’s also the matter of Muppets. “I’m waiting for the fascination for them to die off,” Burkett says.

Moving over to a table full of freshly made hand puppets, Burkett asks if I suffer from “puppet phobia.” Apparently not everybody wants to put their fingers up inside a make-believe person.

“I understand it,” Burkett says. “I mean, I’m morbidly afraid of ventriloquist dummies.” (Of course, that’s not a phobia. It’s just good sense.)

Manipulating a hand puppet isn’t physically difficult, but to bring one to life takes far more skill. “That’s good,” Burkett nods approvingly, when I adjust my puppet’s hand and head to affect a pose of someone listening.

While Burkett’s new play is described as “interactive,” in a way, all puppet theatre is such. Because the characters on stage are not made of flesh and blood, the audience members instill into the characters their own meaning. They are no longer just ticket-buying patrons, but accomplices in the fiction.

“At their best, puppets are little vessels that spark something in the audience,” Burkett explains, when asked about the special appeal of little fake people. “They have no reference point, unlike an actor, who we may have seen before. The puppet, then, exists only to be the character in the play you’re watching at the moment.”

The Old Trout Puppet Workshop, founded 20 years ago in Alberta, makes highly inventive, entertaining and sophisticated plays using puppets. Its new show ventures into different territory for the Trouts: opera. Ghost Opera is a contemporary opera for adults, inspired by an ancient Greek ghost story. A ne’er-do-well commits murder to get himself out of debt. His victim becomes a ghost, haunting the family that has moved into the house she used to own.

Co-produced by the Trouts in partnership with the Banff Centre for Arts and Creativity and Calgary Opera, the production had its world premiere in Banff on May 24 before a run in Calgary.

The puppets, their puppeteers and the singers share the stage; the humans dressed in what Krausas describes as “beige, bandage-y ghost-like costumes.” At times, the singers interact with the puppet characters they are playing.

“I knew it was going to be for puppets, but I didn’t write with puppets in mind,” says Alexis, who won the Scotiabank Giller Prize in 2015 for Fifteen Dogs. Puppets are part of his DNA, he says, as a Canadian growing up watching The Friendly Giant. As for ghosts, he is not a believer.

Krausas, though, figures her experiences with ghosts likely informed her composition, if only subconsciously. She has seen quite a few over the years.

“At times they’ve terrified me, and at times I’ve just waved them away,” says Krausas, who was raised in Calgary and is now based in Los Angeles.

“You just tell ghosts to politely go away and they go away,” she says. “Except in the opera. You can’t politely ask in opera, because then where’s the drama?”

Puppets can arouse nostalgia, trigger long-forgotten feelings of playfulness and evoke a sense of horror. They can also be a window into history and culture. The exhibit Shadows, Strings and Other Things: The Enchanting Theatre of Puppets, which opened at the Museum of Anthropology (MOA) in Vancouver in May, is a spectacle and a contemplation. It is an aesthetic wonder, theatrical and whimsical – but also a study of how puppets have helped to interpret and sustain cultural traditions.

If puppets are having a moment, the show’s curator Nicola Levell – who appears to know more about puppets than anyone has the right to – suspects it may have something to do with digital fatigue, and a societal craving for something more material.

But puppetry is also an enduring and beloved tradition. “Puppets do have this ability to enchant us,” says Levell, associate professor of anthropology at the University of British Columbia. “Even as adults, we suspend our disbelief when we see these little entities come to life.”

The show examines five areas: shadow puppets, strings, rods, hand puppets and stop motion. Each section includes an onstage installation, as if the puppets are frozen in the midst of a play or skit. Behind the scenes, there is information about studios, some going back generations.

There are puppets from 15 countries, including Brazil, India, Italy and Mexico (many are new additions to the MOA’s collection, acquired for this exhibition). There’s a tribute to Punch and Judy; an installation devoted to Vietnamese water puppets; amazing life-like string puppets from Sri Lanka; and rod puppets from China’s Guangdong Province, which became popular during the Ming Dynasty. (This form of puppetry is referred to as “ghost opera.”)

There is a section devoted to Indigenous puppetry, and before entering the show, visitors are greeted by the magnificent Meh, a 12-foot Coast Salish giant who requires five puppeteers – one for each arm, one for the legs, one for the head, and another to keep the momentum going.

Each of the more than 250 puppets is handmade and each, even in stillness, seems to have its own individual character.

“I think that there’s really something that’s quite captivating about being surrounded by faces,” says Levell, who managed to put this show together in less than nine months. “You could spend hours just looking at the details.”

The Ronnie Burkett Theatre of Marionettes production of Forget Me Not at Luminato runs June 5 to 23, at the Joey & Toby Tanenbaum Opera Centre. Information at luminatofestival.com​

Review
Coal Mine Theatre’s Hand to God unleashes inner demons – in the form of a hand puppet
Subscriber content
April 29, 2019 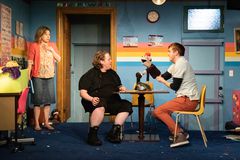 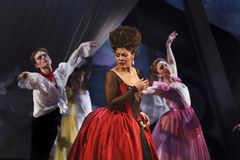 Ed the Sock, the cigar-chomping hand puppet, is making a comeback
May 29, 2018 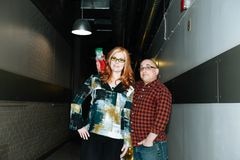