The day Kathy Griffin’s severed-Trump-head photo hit the fan, May 30, 2017, the sharp-edged comedian was at home in Los Angeles, sobbing. (You know the photo and video, right? Griffin wears a purple dress and a lot of eyelashes. Looking solemn, she holds up a $10 rubber Donald Trump mask that’s been dunked in ketchup.) Her Twitter feed was spattered with hate; she was public enemy No. 1 on Fox News. Then Jim Carrey phoned.

“I would give my right arm for this story,” he told her. “You now have an experience comedians dream of. You can present it comedically however you want, and you’re the perfect person for that, because this is what you do.”

“Well,” she replied through her tears, “I do have this story about a day I spent with Trump and Liza Minnelli.”

Obviously, Griffin has already sculpted the Carrey call into a practised, capital-A Anecdote. In a recent phone interview, her answers feel equally prebaked. My questions bounce off her like rain, and she can crack four to 12 zingers in the time it takes me to ask one. Griffin is the human embodiment of free associations fed through a batting-cage pitching machine set on high – she never stops whipping stuff at you.

She made the infamous photo/video with Tyler Shields, a fellow provocateur, and posted it on her Twitter and Instagram accounts. In the immediate aftermath, she defended it – she wanted to shame Trump; she was referencing his “blood coming out of her …wherever” slam of broadcast journalist Megyn Kelly. After things got ugly, she apologized for it: “The image is too disturbing,” she said in another video. “I get it. I beg for your forgiveness.” Then, in August, 2017, she retracted that apology. Now she’s on a “Laugh Your Head Off” world tour that includes stops in Ottawa; Toronto; Kitchener, Ont.; Calgary and Vancouver (details at KathyGriffin.com). In her ads, she wears the same purple dress and holds a blow-up Earth.

The first question I manage to slip in – “But you must have known a severed-head image would offend people?” – elicits a 10-minute response that bounces around like a pinball, randomly setting off lights and bells. The reaction to the photo was a co-ordinated “campaign of shock and awe ginned up against me by an apparatus that was in place long before I put ketchup on a Trump mask,” Griffin says.

It began with Lock Her Up chants at Trump rallies, and Donald Trump Jr. saying on Good Morning America, “We don’t want to just ruin Griffin’s career, we want to decimate her.” Soon, there were death threats on her social-media feeds, which continue to this day; Breitbart and Fox were saying she committed a crime (she didn’t – she’s protected by U.S. free-speech laws); CNN dropped her annual New Year’s Eve broadcast gig; and TMZ was reporting the cancellation of dates on her 50-city tour in real time.

“What happened to me is unprecedented,” Griffin says. “Not in the history of the United States has a sitting president put his thumb on the shoulder of an American citizen, and mobilized the right-wing media and bot farms and robo-calls against them. But I’m a perfect target, a 57-year-old female with no franchise or studio behind me. Then everyone turned on me, left, right and centre.”

“Two federal agencies investigated me for two months,” she rattles on seamlessly, “to see if they wanted to charge me with – wait for it – conspiracy to assassinate the President of the United States.” (When I ask her if the feds had any sense of humour, she deflects – perhaps that’s a punch line she’s saving for her paying customers.)

Still, I persist, she was riffing on terrorist videos of real severed heads. “Have you been to Iraq or Afghanistan?” she replies. “I have. Having been in war zones, I kind of don’t want to hear, ‘Why didn’t you think of ISIS?’ Because I’ve actually been around ISIS. It didn’t even cross my mind until Rosie O’Donnell said to me, ‘What if Daniel Pearl’s mother saw it?’ That’s when I raced to do my apology. But what I found out in the last year is that most of the outrage was faux. And why don’t people ask Trump if he was thinking about ISIS when he said, ‘There was blood coming out of her eyes’?”

If there’s a joke that would shock Griffin, she hasn’t heard it yet. She calls it her stand-up-comedy disorder – any thought that comes into her head, she immediately frisks to find the funny. (When she learned that she’s on a kill list, her first reaction was, “Who else is on it? Any other celebrities?”)

“I believe inappropriate humour is essential,” Griffin says. “I’m going to do a name-drop that’s obnoxious, get ready: When I was at Buckingham Palace with Joan Rivers – hold for applause – she introduced me to Chuck.” Prince Charles.

“Joan called him Chuck,” Griffin rattles on. “She was super-tight with him and Camilla. She introduced me as an ‘outrageous, outspoken American comedian.’ He pulled me in and said, ‘If it weren’t for journalists and comedians, who would keep us honest?’” Beat. “You’re not going to get that answer from Ellen DeGeneres.”

Most comedians start with stand-up and segue to acting. Griffin did it backward. Growing up in the Chicago suburb of Oak Park, the youngest of five children of left-leaning parents, she devoured comedy albums and variety-show appearances by George Carlin, Freddie Prinze and Rivers, who became her mentor – “comedians who shone a light on uncomfortable things,” she says. Her dream was to be a sidekick on a sitcom, à la Phyllis or Rhoda on The Mary Tyler Moore Show. “My philosophy was, let the pretty girl carry the show,” she says. “I’ll come in, get the laughs and go home.”

She moved to Los Angeles in 1978, studied at the Lee Strasberg Theatre and joined the comedy troupe the Groundlings. Her personal experiences quickly became her stock in trade; she’d get on stage and tell stories about whatever guy she’d slept with the night before. Over the years, she began weaving in current events. She’s now done 23 televised stand-up specials, “more than any comedian living or dead, male or female – I’m in the Guinness Book of World Records – every word of which I wrote myself,” she says proudly. “Two years ago, I did an 80-city American tour. So don’t talk to me about the real America, by the way. When you’re a comic, it gives you a close-up view of what’s on people’s minds.”

Her 80-U.S.-date days are behind her, for now. “I’m not crazy,” she says. “I know I can’t go back to those Bible-belt cities where, God love these people, but they think Hillary Clinton ran a child sex ring out of a pizza parlour.” So she told her speaking agent, “Send me to countries where they hate Trump.” Almost immediately, she booked shows in 23 cities in 15 countries. She claims she was detained in every airport, and got a standing ovation at every gig. She started out doing two hours; by the time she played Reykjavik, she’d added so much material that the set had ballooned to three. For extra laughs, she throws in a few stories about her next-door neighbours in Bel Air: the Kardashian-Wests.

“I’ve known this idiot Trump for 20 years, off and on,” Griffin says. “Have you been to New York? He stands at the airport waiting to wave to people. I’ve been on so many bizarre daises with him.” He twice hired her to roast him, and whenever he sees her, “he, like every bully, puts two fingers together in the sign of a cross, like ‘Uh-oh, clear the room, fellas,’” she says. But she’s never told these stories before, “because nobody cared about him before. Now audiences are hungry for them.” In New York, she sold out Carnegie Hall, and will play Radio City Music Hall the night before.

Despite her bulwarks of defiant words, Griffin obviously was shaken by this experience. “Of course I was frightened, I still am,” she says. “Am I bitter that Tyler Shields – a man – didn’t suffer the way I did? A little. Do I wish he’d be a gentleman and give me the photo’s copyright? Yes.” She wonders whether things would be different if she’d posted the video after the Harvey Weinstein scandal broke. But she wouldn’t bank on it.

“Don’t talk to me about #TimesUp,” Griffin says. “I’ve got news for you, Time’s Not Up Yet. The sexism and misogyny I’ve experienced in stand-up comedy is immeasurable. On top of that, I’m doing these gigs for 20 per cent of what I was paid two years ago.”

But Griffin did what she did because she is who she is. So this is what she’s doing about it. “I love my job,” she says. “That’s why I’m fighting and biting my way back.” 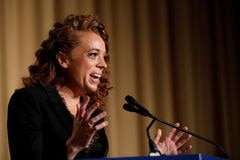 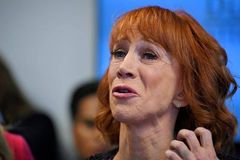 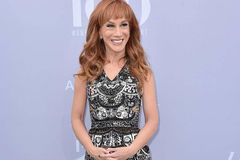