Stratford, Ont., is one of Canada’s iconic arts destinations – home of the Stratford Festival, North America’s largest not-for-profit theatre company until the pandemic. For the summer, theatre critic J. Kelly Nestruck will be on site in the cultural city chronicling the ups and downs of its reemergence as the live arts come back to life across the country.

Adrenalin flooded through Laura Condlln’s body as she stepped onto a stage in Stratford, Ont., on Tuesday, her first time in front of a living, breathing audience in 16 months.

For 75 minutes, the actor showed nothing of the roller coaster of emotions she was feeling and instead channelled them into communicating those of her character, Shannon, a daycare operator whose marriage is falling apart and finds herself confiding in a neighbour who has dementia.

“It was a lot – trying to embrace the adrenalin, but not let it take over,” Condlln said a day later, still processing it all. “And to not just stop and weep for joy that it was actually happening.”

Finally, she allowed her true feelings to pour out. “It has been a hard – like, understatement of the century – such a hard year here,” she said. “And everywhere. … But this town has special vibrancy that has been so dull in the last little while.”

Condlln, similar to many stage actors of her calibre and stage of career, owns a home in Stratford and is based in this small, creative city a couple hours outside of Toronto. She’s a “13 and a quarter season” veteran of the Stratford Festival’s acting company – the quarter representing the season she rehearsed but never got to perform in 2020 when the pandemic hit – and in the before times her subtle yet exquisitely embodied performances were in demand across Southern Ontario.

This summer, however, though Condlln is acting at a Stratford festival, it’s not the Stratford Festival – which is only hiring a fraction of its usual company of actors for a reduced season of plays and cabarets, performed mostly under outdoor canopies starting this weekend.

The upstart Here For Now 2021 New Works Festival, which beat the bigger festival to the punch with live performances this week, is providing a stage for many others. It aims to premiere 10 original one-act plays over the next three months to audiences of 50 or so, in a tent erected in front of the Bruce Hotel’s wildflower garden.

This new festival featuring Condlln (in a play called goldfish by fellow Stratford Festival star Steve Ross) is the creation of Fiona Mongillo, an actor born and raised in the area but a bit of an outsider to the big festival.

Mongillo started Here for Now in 2012 largely, she says, to produce shows she wanted to act in. She is now the impresario of a theatre festival featuring some of Canada’s most renown stage talent, owing to a little daring and a good sense of timing.

In 2020, she was set to remount a play called Whack! when COVID-19 arrived in North America.

The Stratford Festival – a ship simply too large to change course easily, let alone pivot – cancelled an entire season for the first time in its history. But Mongillo wondered whether she could still go ahead with her play: It only had three actors (including herself), who could “bubble” and would be content performing to only seven people if need be. “Why don’t we just rehearse this and see what happens?” she recalls asking herself.

Gradually, that single show grew into a whole open-air festival, opening its arms to the talents of many unemployed Stratford Festival regulars such as Jonathan Goad and Jessica B. Hill. Miraculously, its first shows opened last July on the day the province started allowing 25 people to watch performances outdoors. Mongillo’s festival was suddenly financially viable. Many of the shows sold out and extended, playing largely to locals.

Flash forward a year and Here for Now’s New Works Festival is a proper not-for-profit that has expanded in size and to a $300,000 budget – but is still small and scrappy enough to be supple in the face of provincial torpor regarding the announcement of clear reopening protocols for the performing arts.

The Bruce Hotel, a boutique property that sits on 6 1/2 acres of land, has committed to the little festival even further this year, investing in a patio slab and a proper tent so shows can go on no matter the weather.

Bruce general manager Jennifer Belanger, who’s been handling the complicated logistics with the city and public health officials, imagines the current appetite for simply produced outdoor theatre in Stratford could persist even after the pandemic fully recedes and big-budget indoor performances resume. “We’re optimistic that it could be a trend for years,” she says.

Many alternative theatre festivals have come and gone in Stratford over the decades, as young creators not invited to be part of the flagship festival have attempted to challenge it on its own turf. (John Palmer, the “enfant terrible” nationalist director who died last year at 77, tried twice in the 1960s before going on to co-found Toronto Free Theatre.)

Here for Now’s New Works Festival may, however, last longer as it’s not in opposition to the big festival, but in a symbiotic relationship with it. There are always more great theatre artists living in Stratford than can fit in a single season – a fact that is just not always as pronounced as it is now.

It was never unusual in “normal” times for stage actors to go from earning a solid living on the largest stages in the country to acting in a makeshift venue in a no-budget show. Head to any Fringe Festival in the country and you’ll find professional actors with asterisks beside their names in the program indicating they’re performing with “permission of Canadian Actors’ Equity Association.”

At the opening of another show on Tuesday, a sweet two-hander about musicians pivoting called Tracks, I sat next to – that is, six feet away from – bona fide Stratford legend Seana McKenna, who is herself directing a show later in the New Works Festival season.

“Back to basics,” she said, with a shrug and (I think) a smile behind her mask.

The road to Ode (to Joy): Maestro Gustavo Gimeno’s plan to gradually ramp up the TSO postpandemic
June 16, 2021 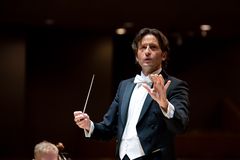 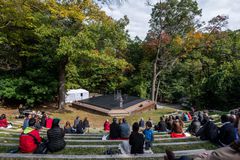 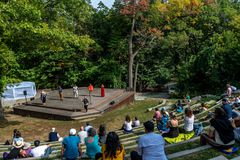