At the centre of Toronto’s Aga Khan Museum is a pale courtyard encased in glass. Since early October, a circle has overtaken this square: a Mongolian yurt in the middle of the courtyard is housing a team of actors and musicians. Curious museum visitors can enter the yurt through a swinging door, take off their shoes and watch rehearsals for a production called Noor.

They may catch musician Anwar Khurshid playing a sorrowful melody on his sitar. Or they may hear Rosina Kazi in the midst of a song in Urdu. On the day I visit, I watch a scene between two young women talking to each other on their phones. Aubrey (Sofia Rodriguez) and Noor (Erum Khan) are dating and their conversation oscillates between youthful wryness and little confessions of tenderness. Aubrey reads Noor an excerpt from Hannah Arendt’s writing that caught her attention while studying; it suggests that love is the rarest occurrence in a human life. “Do you think that’s true?” Aubrey asks. Noor isn’t sure how to answer.

Noor opens on Wednesday the way any regular play would open, but its process – not to mention its setting and content – hasn’t been regular in any way. Khan and director Erin Brubacher aren’t sure whether to even call it a play; they’re also billing it as a concert, live installation and performance experiment in a museum context.

The project began almost seven years ago when Brubacher was in charge of the young playwrights’ program at the Tarragon Theatre and encouraged Khan, who was 17 at the time, to keep writing. Khan, who identifies as queer and Muslim, says, “I was so thirsty for content that I don’t get to see – content that’s reflective of my own lived experience. That was the driving force for the piece.”

Once Khan had finished a draft she was excited about, she and Brubacher thought about producing the play in a traditional theatre (they presented an excerpt at the Rhubarb Festival earlier this year), but something didn’t feel right. They wanted to push the audience’s experience further, playing with the way a particular venue shapes our expectations about what is being performed. Brubacher liked the disorienting overlap of a museum and a theatre. “Then you’re in a yurt, where you have no roadmap at all,” she adds.

Brubacher is probably best known for Jordan Tannahill’s award-winning Concord Floral, which she co-directed with Cara Spooner (most recently at Canadian Stage in 2016). It’s the sort of play that feels indivisible from her and Spooner’s electric production, which premiered at Toronto’s Theatre Centre in 2014. The large cast of teenage actors were organized to incredible visual effect – reality seemed heightened through an inspired use of the collective.

With Noor, Brubacher is similarly interested in rethinking what theatre can do, and its boundaries with other art forms. “In theatre, I think we’re very fixated on categorizing things and spending a lot of time deciding what’s theatre and what’s not instead of just being there,” she explains. Both she and Khan are interested in thinking of theatre as a community event – simply being alive to the experience of witnessing collectively. “That’s what theatre is supposed to do and we’re hungry for it to do a better job at that,” she says.

Writing the play helped Khan navigate her queerness at a formative time in her life. “Queer spaces in the city often seem very homogeneous, very white,” she says. Now, at 24, she thinks the production is partly a way of sharing that side of her identity with her family, though she hems and haws over the right turn of phrase. “I think ‘coming out’ is a very westernized notion. For me, I never thought I had to have that kind of conversation.” She pauses and starts to smile. “But yeah, why not do it in more style?”

Noor runs from October 13-21 at the Aga Khan Museum. 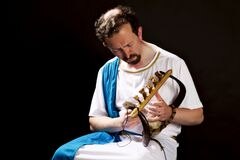 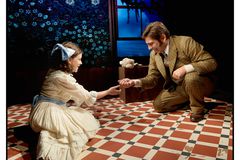 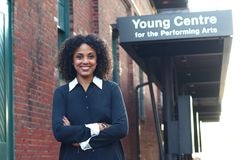