Creation stories are not told quickly on the Lytton First Nation in the British Columbia Interior, where Kevin Loring, who is tasked with creating a more prominent place for Indigenous theatre in Canada, spent his childhood.

A Nlaka’pamux elder will head into the mountains to prepare a story, sometimes for weeks or months. When he or she returns, the community holds what is called a shPtaQUlh – pronounced a little like ’spectacle’ but more rushed – in which the narrative unfolds, non-stop, over as many as four days.

The storyteller calls out periodically to listeners to determine if they are still engaged. If there is no response, the saga must stop and will not resume until the audience begs for more.

But the events can go around the clock because they are powerful reminders to the Nlaka’pamux people of their culture and their world view, Loring says.

“What’s encoded in those creation stories are moralities, laws, science, the way that we engage with the world and our spirituality,” he says in a recent interview. “They are like our parables, our Bible stories. They talk about the order of the world and how it was created and our human values within that world.”

This is theatre – long-lasting one-man performances – that inspired Loring’s love of the stage.

The plays he intends to bring to Canadians as head of the National Arts Centre’s bold plan to create an Indigenous Theatre – provided sufficient funding can be found – will be considerably shorter, tailored for audiences accustomed to performances that end with a curtain call a couple of hours after they begin.

Still, they will have similarities to the morality stories of his youth.

Loring, a playwright, actor and teacher who won the 2009 Governor General’s Award for his play Where the Blood Mixes, was hired last June to be the artistic director and given a year and a half to figure out what a national Indigenous Theatre will actually look like. Its first full season is scheduled for 2019-20.

“I think every artist and every arts organization has their own way of doing it,” he says.

But “there is a kind of holistic nature to the work where the responsibility is felt very strongly about giving back to community,” Loring says, “or that its purpose for being in the first place is to heal, or to feed back into the community in a way that is uplifting or empowering or revealing.”

The National Arts Centre sits on the Rideau Canal in downtown Ottawa, in view of Parliament Hill, and it is the only bilingual, multidisciplinary (dance, music and theatre) performing-arts centre in the country. George Ryga’s The Ecstasy of Rita Joe, about a young native woman who was out of place both in the city and in her own culture, was the play selected to open the NAC’s doors in 1969. And, for many years, the centre has staged at least one Indigenous play every season.

But that is not the same thing as a national theatre that runs Indigenous plays all season long, year in and year out.

That deliberately adventurous (the word “adventurous” is written into the NAC mandate) proposal began with Sarah Garton Stanley, the associate artistic director of the NAC’s English theatre.

Stanley was working with Corey Payette, an Oji-Cree playwright, actor, composer and director, and realized that there are hundreds of works by Indigenous playwrights that Loring describes as both beautiful and challenging. During their collaboration, she and Payette both came up with the same thought, Stanley says.

“At a certain point, it just became really clear that there were so many stories that were not being told, so much focus that needed to be placed on foundational stories of this land,” Stanley says. “Canada is a land of Indigenous peoples and settlers, and we are in this moment of reconciliation and understanding new relationships. Indigenous stories need to be at the centre, at the heart, of what this country is in its sense of itself.”

And the NAC, she says, is the leading performance-art storytelling space.

Stanley put the idea to Peter Herrndorf, the NAC president and chief executive who is retiring in June, and he quickly agreed. “He just knew this is what had to happen,” Stanley says.

So the NAC will become the first national arts institution anywhere in the world to have an Indigenous arts department. But there is one critical step that must take place before the dream becomes a reality: The federal government must be convinced there is merit in such a theatre, and it should provide continuing funding.

Loring says he was assured when he interviewed for his job that the theatre would receive the same funding as the NAC’s English and French theatres. Anything less would be “tokenism,” he says. That means it would have a budget of $3.2-million annually.

The NAC administrators hoped to see that money in the federal budget that was delivered in February. But it wasn’t there.

The arts centre appealed to private donors, and turned Herrndorf’s retirement party early this month into a fundraising dinner which generated $1-million to get the Indigenous theatre off the ground and keep it going for a year.

But the federal government will eventually have to foot the bill, or the national theatre, as conceived, will not happen. Heritage Minister Mélanie Joly, who was at the Herrndorf party, would not answer questions about the possibility of Ottawa’s support. So there is still much uncertainty.

Still, Loring is moving ahead with preparations on the assumption the Liberal government, which has declared that no relationship is more important to Canada than the one with Indigenous peoples, will find the cash.

His first job was to define Indigenous theatre.

In 2012, the NAC staged Shakespeare’s King Lear with an all-Indigenous cast.

Rather, he says, it must speak, from the core, to the Indigenous experience: “The central artistic vision has to be led by Indigenous people.”

That may be a difficult sell to theatre-goers who are searching for the saccharine experience of a Broadway musical.

Indigenous plays tend to explore the “fundamental dysfunction of Canada,” which is its relationship with the people who were here before the arrival of the Europeans, Loring says. They look at the residential-school system, the dislocation of Indigenous children from their families, the murders of Indigenous women, the poverty and the social inequity.

And the stories they tell do not always unfold in a linear fashion.

Those of Vancouver playwright Marie Clements, for instance, reveal themselves in a circular fashion. “They exist in a kind of ‘all time is now, all places are here’ kind of space, which is very fourth dimension and very Indigenous spirituality-based. The past is present and is the future,” Loring says.

That may draw crowds. Or it may not.

“But I feel that our metrics for success aren’t so much how much box office we bring in, but in the impact that we have on Indigenous communities,” Loring says.

And he expects those benefits will be multiple.

First, he says, the theatre will provide a place where young Indigenous actors, directors and playwrights can hone their craft: “That, in itself, is huge because, like all artists, we’re struggling and trying to make ends meet, and we need that creative capacity of infrastructure in our performing ecology.”

Second, Loring says, the NAC stage will be a springboard for launching Indigenous plays that will tour across Canada, both to Indigenous communities and to stages in larger cities.

“About half of my resources I will look to supporting work, and also seeding work, in the different regions of the country where Indigenous theatre doesn’t have any opportunities,” Loring says. And if an Indigenous play “goes up in Toronto and it’s a first run and then it goes down, we have an opportunity to say, ‘Look, do you want another kick at the can?’”

There was theatrical magic in the shPtaQUlh of Loring’s First Nation.

“I remember listening to our elders way into the wee hours of the winter nights,” says Charon Spinks, a former home-school counsellor on the Lytton reserve who says Mr. Loring was one of her favourite students. “They were so interesting, and there was so much laughter.”

It is that kind of magic that Loring wants to bring to the NAC stage.

And in the process, he says, “the artists involved get to grow and become stronger, and the whole theatre ecology is stronger.” 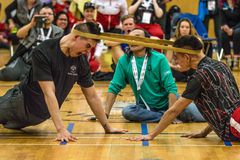 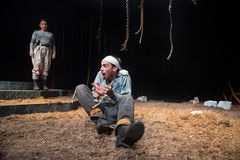