An “inconceivable” opening-night cancellation of The Tempest due to a bomb threat at the Stratford Festival ended up creating its own kind of magic in the tight-knit community.

Students gathered in a grassy area, reading lines from The Tempest off their phones.

Actors came together at a hotel to provide support to each other over drinks, with The Tempest star Martha Henry holding the large magic stick of her sorcerer character, Prospero.

And theatre company members worked around the clock with authorities and Stratford, Ont., officials to ensure the situation was under control.

By all accounts, Monday’s threat that scrubbed the 2018 season opener and sparked a criminal investigation was certainly a shocking blow. But in the end it didn’t seem to faze the picturesque community and resilient theatre company, which resumed performances and increased security Tuesday after being assured by authorities that nothing suspicious had been found.

“It’s full steam ahead,” festival artistic director Antoni Cimolino, who is helming The Tempest, said Tuesday in a phone interview.

“Our audiences last night were really understanding and people are calling in for tickets right now. Our actors are going back to work, it’s a sunny day, and last night seems like a sad aberration that we hope isn’t repeated.”

Stratford police said they received a call Monday evening before the opening of The Tempest that explosives had been placed at the festival.

The threat forced the evacuations of both the Avon and Festival theatres – some 45 minutes before the start of the Shakespeare classic in which Henry was to make a highly anticipated, gender-bending turn as Prospero.

Cimolino said police officers and a canine unit checked both theatres three times for suspicious items or packages but didn’t find anything. By Tuesday morning, they gave the all-clear and turned operations back over to staff.

On Tuesday afternoon, performances of The Comedy of Errors and An Ideal Husband went ahead as scheduled, and Stratford Police said they were “in the very early infancy stages” of a criminal investigation.

“We’ve had security on-site and we’re checking bags and we’re making sure everybody is safe,” Cimolino said.

“We all feel that everything is being done to make sure that our patrons are safe, and our patrons seem to be responding. There’s actually a very good feeling in the air.

“But all that being said, I think there’s a real sadness at what was done last night to Martha Henry and to that production of The Tempest here at the festival.”

Cimolino said this is the first time in the history of the festival that an opening-night performance has been cancelled.

Lucy Peacock, who plays the goddess Juno in The Tempest, said cast members were feeling a mix of shock, rage and confusion as they left the building and went to a nearby park following the threat.

“Martha Henry said in all her 80 years, she had never experienced a show not happening,” she said.

“It was just inconceivable that it wasn’t going to happen.”

Cimolino said everyone offered their help – from the mayor to city officials and even bagpipers who were on hand.

Eventually company members and others made their way to the nearby Bruce Hotel.

“Martha, leaving the festival, took her Prospero staff in hand and went down,” Cimolino said.

“It was like this wizard was walking down the street. So there was a kind of surreal quality to it – and there were moments of beauty that came out of it.”

A company actor even spotted a group of students on Tom Patterson Island, which is at the base of the festival, carrying on the show in their own special way.

“They were there in a circle and some of them were up a tree and all of them had their phones on and they were reading together The Tempest,” Cimolino said.

“So it created a kind of magic.”

The festival now intends to find a new opening night for The Tempest, which has its next performance scheduled for Saturday night.

“It’s the old cliché – the show is going on, the show must go on, it will go on,” Peacock said.

“Actors are resilient, theatres are resilient, the art will happen, the words will be spoken, the songs will be sung – and something extraordinary will bizarrely come out of this, even if it’s simply the galvanizing of a large number of people for the rest of the season.” 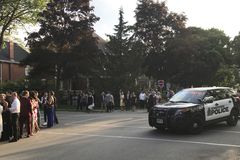