Between the welcoming folks of Gander, Nfld., and Ted Lasso, Apple TV Plus seems to be cornering the market on kindness.

Apple Original Films announced on Friday that it has purchased the rights to Toronto-based Entertainment One’s film of the warm-hearted Canadian musical Come From Away’s Broadway production.

Composer/lyricist team Irene Sankoff and David Hein’s Tony-winning hit, which tells the true story of the open-hearted hospitality 7,000 stranded airline passengers received in Gander after the events of September 11, 2001, will fit in perfectly on Apple’s streaming service alongside Jason Sudeikis’s good-natured comedy about a soccer coach named Ted.

This acquisition by Apple is the latest sign that Come From Away is making a strong comeback after having record-breaking stage runs halted by the COVID-19 pandemic a little more than a year ago.

While its Toronto set sits dormant at the Royal Alexandra Theatre, Come From Away’s Australian production reopened early in 2021 (it’s currently in Brisbane and is set to move to Sydney in June), and its West End production is planning to reopen at the appropriately named Phoenix Theatre in London in July.

The North American touring production also seems on the verge of restarting, with December dates recently announced for Jacksonville, Fla.

Broadway, as a whole, is reportedly eyeing a fall restart, though nothing firm has been announced for the New York production that opened in that tourist-oriented commercial theatre district in 2017.

Shooting of Come From Away at the Gerald Schoenfeld Theatre on West 45th Street in Manhattan, however, is under way, with the website Broadway News reporting that signs on the door listed filming dates from April 27 to May 5.

The precise cast for this filmed production has not been announced, but it will feature Broadway performers, not Hollywood substitutes as in the recent Netflix film adaptation of The Prom. Petrina Bromley – the Newfoundland actor who has brought authenticity to the cast as the animal lover Bonnie in the show from its early days – is currently in New York and expected to perform in her usual role.

While filmed theatre productions were once seen as having a niche audience, streaming services have created a strong appetite for them during the pandemic; the premiere of Hamilton on Disney+ last summer was a major event. (Radical Media, the company that has shot Lin Manuel-Miranda’s hip-hop history musical as well as David Byrne’s American Utopia on stage, is in charge of the Come From Away capture.)

Some sort of screen version of Come From Away has been in the works for years. In November of 2017, a feature film adaptation was announced with Sankoff and Hein planning to write a screenplay to be directed by Christopher Ashley, who won a Tony for directing the musical on stage.

But, in February, eOne announced it was pivoting to a filmed stage production instead, with Sankoff and Hein serving as executive producers. A release date of September 2021 – 20 years after the terrorist attacks of September 11 – was mooted then, though Apple has not yet confirmed a streaming premiere.

While there was a time when it was thought that adapting a musical into a film would take away from its box office potential, the thinking now from producers is the opposite – that movies and filmed productions can whet the appetite for the live experience.

John Karastamatis, director of communications at Mirvish Productions, notes that Come From Away in Toronto has already enjoyed a strong repeat audience, with one enthusiastic fan having seen the show more than 50 times during its run there.

“Despite the fact that Come From Away has played continuously on Broadway since 2017, in Toronto since 2018, on tour across North America since 2018 and in London UK and Australia since 2019, it has barely scratched the surface of its global potential audience,” Karastamatis says.

“This live-capture of the Broadway production will only help to build more patrons for the live productions around the world. Bring it on!”

No news yet on when Come From Away might return to a stage in Canada. 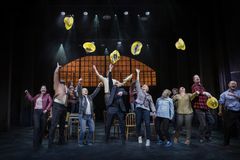 Theatre Review
Review: Come From Away is a story of coming together on an ‘island in between’
February 18, 2018 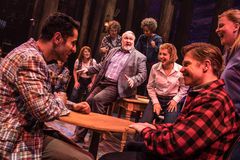 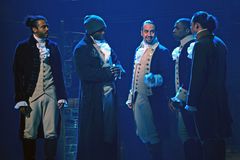