Sondra Radvanovsky, undoubtedly one of the true living stars of the opera stage, has a sense of a “split personality” in her life. There’s her private self, who lives in rural Southern Ontario with her husband; and in sharp contrast, there’s the other self she lovingly calls “Sandy Singer.”

“Sandy Singer is the one that’s onstage, and everything is bright and shiny and smiley. That’s the person that’s always bubbly and effervescent,” Radvanovsky says, cradling her hands around a tall mug of tea. “The private Sondra is one that not everybody gets to see.”

The opera houses in which Radvanovsky works are situated in the hearts of the world’s great cities. The 49-year-old soprano is a beloved presence in the major opera houses of London, Vienna, New York and Toronto, to name only a few. It’s in the city centres of artistic hubs such as these where Radvanovsky, statuesque and with a star’s smile, may be recognized on the street, and asked for some combination of an autograph and a photo.

She certainly adores what she does, yet she inevitably reaches a point of exhaustion from the babel inherent in her professional life. American-born, Radvanovsky became a Canadian citizen in 2016 (her husband is Canadian), and she finds her home northwest of Toronto in Caledon, Ont., a place to counter the lights, recognition and crowds. “Coming home is a way of me recharging my batteries.”

Most opera singers can roam freely in public – to a certain degree, even superstars such as Placido Domingo, Renée Fleming and Radvanovsky herself – their fame contained to the throngs of fans crowding around the stage door following a performance. Even so, Radvanovsky feels a strong responsibility to acknowledge these admirers, and she takes the time to meet them, chat and pose for a photo.

For those who have seen her onstage, “Sandy Singer” is an all-too-casual name for what Radvanovsky does with her thrilling instrument that seems to grip you by the heart. She is currently working close to home, in rehearsals at the Canadian Opera Company in Toronto for Stephen Lawless’s upcoming production of Gaetano Donizetti’s Anna Bolena (opening Saturday), in which she’ll sing the role of the famed, and ultimately beheaded, second wife of Henry VIII.

The opera is one of three by Donizetti based on the lives of British royalty; with Queen Elizabeth I in Roberto Devereux and Mary, Queen of Scots, in Maria Stuarda, Anne Boleyn in Anna Bolena adds up what is known as Donizetti’s “Three Queens” – and Radvanovsky sings them all.

In fact, she has sung them all in a single season. Between September, 2015, and April, 2016, Radvanovsky took on all three queens in back-to-back productions of Anna Bolena, Maria Stuarda and Roberto Devereux at the Metropolitan Opera in New York. “Not a lot of people are stupid enough to have done it,” she says, laughing about what is a rare operatic feat. The roles present three different sets of vocal demands, and three complex dramatic challenges. “To do all three of them, as I did, back to back to back, is slightly insane,” she says, adding with a smile, “But I like challenges.”

Her attitude going into a challenge such as Donizetti’s Three Queens is bold, and almost idealistic. “I want to make it historic, I want to make it so that people are going to be talking about it 50 years from now.” Hers is a fixation on excellence that matches her ambition for greatness, fitting of the woman who admits, “I never do anything 50 per cent. In my life, I’ve always gone full-blast, 100, 150 per cent.”

It’s artistic triumphs such as her queenly trilogy – and her other demanding signature roles like Tosca, Norma and Manon Lescaut – that put Radvanovsky into the upper echelon of today’s opera singers. Her voice is world famous and her audiences are significant, largely thanks to her steady presence on the Metropolitan Opera’s Live in HD broadcast series (Norma, Tosca, Il trovatore and the Three Queens).

For her great efforts, she has reaped great rewards, earning from the public – and critics – what she calls the “gold stamp of approval” and demonstrating what it means for an opera singer to keep her voice in impressive shape after more than two decades of professional work.

It’s no wonder Radvanovsky’s fans want to meet her, to be near greatness and to feel as though they know her offstage as well as on. What does she do for fun? Is she into yoga? What does she watch on Netflix? It’s almost an unanswerable question, though; after all, careers like Radvanovsky’s are not made – or maintained – with large amounts of downtime.

When she’s not in rehearsals or performing, she’s learning new music, giving interviews, attending functions, and dealing with “e-mails … more e-mails.” She has started to teach and give masterclasses, and recently served on the 12th Glenn Gould Prize jury. With a happy sigh, she admits, “When I’m not doing any of that, I enjoy sitting in my pyjamas, in our house in Caledon.”

Radvanovsky will turn 50 next year, and she has already begun to carve out the time to celebrate. “My husband has blocked off a whole month in my schedule,” she says with a smile, “but I have absolutely no details.” The bar is surely set high after her husband’s 50th birthday, for which she flew him to Monte Carlo to see the Monaco Grand Prix.

It’s fun to imagine what Radvanovsky would do to celebrate a birthday, or any special event, considering that her everyday life is full of special occasions. What likely makes a day truly special, though, is doing something for “private Sondra,” and leaving “Sandy Singer” off the guest list.

“It can be exhausting, being ‘on’ and everybody wanting a piece of you, in a way,” she says. “You don’t want to disappoint people.” With her fame she feels a special sort of responsibility to opera as a whole. Interacting positively with fans can speak volumes about opera singers; perhaps that behaviour can even overshadow any stereotypes of stuffiness around the opera industry. “You want them to have a good flavour in their mouth when they leave you,” she says. “Ultimately, it influences them coming to see another opera.”

Radvanovsky’s success is simple, in a way. She brings excellence to her performances, she sets high standards for herself and she works very, very hard. There’s an easy warmth in her demeanour, along with a charisma that seems to simmer just below the surface. For today’s opera lovers, she is a star of the stage, but also an advocate for the art form. “That is my goal,” she says, “To get people to keep coming back.”

And really, who better to vouch for opera than the woman who takes on three queens at once?

Anna Bolena runs at Toronto’s Four Seasons Centre from April 28 to May 26 (coc.ca). 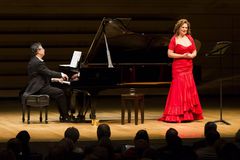