The angriest confrontation in The Election, the new grassroots political play by Common Boots Theatre, isn’t between a Liberal and a Conservative. It’s between two young women, both intellectuals and feminists, who ought to be allies: Zoe, urban and Jewish, who is campaigning for the NDP, and Skye, an Anishinaabe from a northern reserve who refuses to vote.

Skye (Joelle Peters) argues passionately that white governments have betrayed and destroyed her people, and she’s not going to participate in their system. Zoe (Rachel Cairns) counters with equal passion that the environment is in peril and we need to put aside historical grievances and work together. As Cairns’s Zoe goes toe-to-toe with Peters’s Skye, the tension in the theatre is palpable. And to say how it’s resolved would be a spoiler.

Their flare-up is the only truly exciting scene in this otherwise insightful, but somewhat tepid, ground-level look at Canada’s last federal election. Its three-week run at Theatre Passe Muraille is perfectly timed to overlap with our current trip to the polls and, if nothing else, it’s a refresher on the issues and concerns of Canadians four years ago. Some we had forgotten, such as the Conservatives’ controversial proposal of a call-in line to report “barbaric cultural practices.” Others, such as combatting climate change, have only become more urgent.

The play is based on the experiences of a diverse group of theatre artists who were tasked with volunteering on campaigns for the three main parties during 2015. Playwrights Natasha Greenblatt and Yolanda Bonnell, two of the participants, shaped the resulting observations into a dramatic script with input from the others.

While Zoe has been sent to a northern riding by the New Democrats, back in downtown Toronto, Terry (Augusto Bitter), who is Jewish and gay, is working for a Conservative candidate. And somewhere in the suburbs, Samraj (Anand Rajaram), an apolitical actor, has reluctantly agreed to help a fellow South Asian running for the Liberals.

As they work the phones, put up signs and knock on doors, they confront ordinary Canadians’ concerns and wrestle with their own convictions. Terry finds himself in a budding relationship with Landon (Courtenay Stevens), a sports-loving, beer-chugging friend of the Ford family, while wondering if he can belong to a party supported by homophobes and evangelical Christians. Samraj rediscovers the immigrant community he’s rejected and his long-dismissed Tamil roots. Zoe’s preconceptions of Indigenous people get a shakeup from Skye and from Skye’s wise grandmother, Milly (Rose Stella), who facilitates a visit to the reserve.

The show’s gung-ho gang of actors, directed by Jennifer Brewin, also fill minor roles and attempt some broad parodies of politicians and pundits, from Justin Trudeau and Tom Mulcair to the CBC’s Rosemary Barton and right-wing bloviator Ezra Levant. TPM’s mainspace has been reconfigured for an in-the-round staging, with a set by Anahita Dehbonehie suggesting a campaign headquarters, but Brewin doesn’t confine her cast to it – they swarm all over theatre, often thrumming like bees to create a vocal score.

There is a strong – and welcome – emphasis on the Indigenous perspective, and not just politically. The show opens with an Indigenous-inspired chorus that frames Canada as an ancient, long-occupied (and much-mutilated) land. But the fact that the show’s creators were confined to campaigns in Ontario means we don’t really get the big picture. There are no viewpoints from Quebec or the West.

Common Boots – which has produced the show in conjunction with the Nightwood and Theatre Direct companies – did a similar piece a few years back called The Public Servant, a comedy based on the real lives of Ottawa’s federal employees. The Election is likewise valuable in showing us the ordinary people who do the hard slogging that makes a democracy work. You only wish it had more scenes, such as the one between Skye and Zoe, that offer compelling debate. Lord knows, we’ve been starved for it in this campaign.

The Election continues to Oct. 27. (passemuraille.ca) 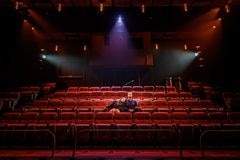 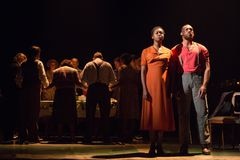 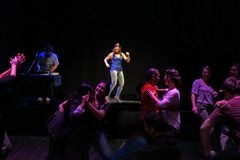