A half-dozen directors dominated the American musical theatre of the late 20th century. Most of them were choreographers. Harold Prince, who has died at the age of 91, was the only exception. And with his particular combination of brains and showmanship, he may have been the greatest of them all.

Phantom, a huge – indeed eternal – hit in London and New York, was brought to Toronto by Garth Drabinsky’s Livent company, and it kicked off a momentous partnership. In 1992, Mr. Prince directed, and Livent produced, Kiss of the Spider Woman. Manuel Puig’s novel and play – about an avowedly apolitical gay movie fanatic and his committed Marxist cellmate – seemed an unlikely subject for a musical: a case perhaps of “what famous title hasn’t been musicalized yet?” It had already been given a showcase production in New York, where it hadn’t worked.

But Hal Prince, as he was best known, was indefatigable when he had a project he believed in. The show now moved, masterfully, and was moving. Canada’s own Brent Carver, as the doomed film-fan, was amazing, delivering a performance in which the rhythms of song, speech and movement seamlessly fused.

Mr. Prince next directed and reimagined Show Boat for Livent: the first epic American musical, the one that had revolutionized the form in the 1920s. The revival was a success in Toronto, New York and London. He directed one more Livent musical, the brand-new Parade. It was workshopped in Toronto, very excitingly (interest declared: I was working for Livent at the time), but the company’s implosion meant that the city never got to see it. All the same, those four shows make quite a track record. In Canadian commercial theatre, it’s unique.

They are, of course, only a small part of Mr. Prince’s overall body of work. A list of the major musicals of his era with which he wasn’t involved would be shorter than one of those with which he was, as producer, director or (frequently) both. I once asked him when he had first turned to doing political musicals. He replied that he had always done them; The Pajama Game, with which he arrived on Broadway in 1954 – as, in William Goldman’s words, “the last of the boy wonder producers” – was about a strike; it doesn’t seem particularly incendiary by today’s standards, but blue-collar musicals were hardly standard fare back then. It inaugurated a string of Prince-produced household-name musicals: Damn Yankees, Fiorello! (Pulitzer-winning, and crying out for revival), A Funny Thing Happened on the Way to the Forum and the two talismanic titles West Side Story and Fiddler on the Roof. And that’s before we get to the shows he directed.

Cabaret was the turning point, a musical about the beginnings of Nazi Germany that packed a far greater punch in his 1966 production than it has in the more strenuously shocking revivals that have followed it. He liked engaging with difficult subjects (Parade was about a lynching) and he thrived on theatre-as-metaphor. He worked with just about every major composer of his generation, but his greatest collaboration was, of course, with Stephen Sondheim, with whom he created six shows that dominated the 1970s. Company, A Little Night Music and Sweeney Todd are already classics, but the two that stand out for me as feats of direction are Follies – which, in its unrepeatable original staging, had both the glamour of old Broadway and the savage sweep of a Shakespeare history cycle – and the extraordinary Pacific Overtures, which told the story of the enforced “opening up” of Japan through traditional techniques that grew steadily more Westernized as the history moved onward. It left most “political theatre” in the dust.

Mr. Prince had a nervous breakdown when he was 14, after which, he once wrote, he created “a person” for himself: “quite a friendly, extroverted hyper person.” It was a hugely successful creation. The Hal Prince I knew – and whose existence has been confirmed by many who knew him far better than I – was all those things; he was also funny, passionate, decent and, by common consent of his collaborators, a great unruffled leader in a crisis; which in the theatre can mean most of the time. I have fond memories of conversations with Hal at his office in Rockefeller Plaza, covered wall to wall with posters of his shows (he won more Tony Awards than anyone else in history); of interviewing him in hotel suites from the Four Seasons in Toronto to the Savoy in London; and of more informal late-night dinners in Yorkville, the most important meal of his day, since he never stopped for lunch while rehearsing. In every setting, he was cordial, considerate and unstoppably articulate.

His signature pose, glasses perched on his balding forehead – somehow, they never seemed to be on his nose – passed into theatrical mythology. He was a genius and a gentleman. It’s not just the theatre that will miss him. 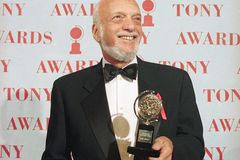