It’s now been a little more than a year since performing arts venues first closed down across Canada, and theatre professionals and audiences have been reminiscing on social media about the last show they saw in person before the pandemic hit.

I joined in on Twitter by posting a couple of photos I took on March 11, 2020, at the Princess of Wales Theatre in Toronto at the last pre-pandemic performance I attended. It was Summer: The Donna Summer Musical on tour, presented by Mirvish Productions.

As Harvey Young, cultural critic and dean of the College of Fine Arts at Boston University, pointed out, that means the last song I saw performed on a stage was, fittingly enough, the Donna Summer disco hit Last Dance – the source of the lyrics posted above.

I didn’t end up writing a review of Summer as it quickly became apparent that the production would close imminently (as it did, two days later). That same week, I cancelled a flight to Montreal, where I had planned to review, among other shows, Mob, the premiere of the English-language translation of Catherine-Anne Toupin’s hit La Meute, at the Centaur Theatre.

One year on, the Centaur is re-rehearsing Mob in anticipation that Quebec Premier François Legault might allow theatres to open to small, distanced audiences again later this month. There’s finally a light at the end of the tunnel for theatre artists and audiences as vaccination efforts ramp up.

But just how dark the tunnel has been for those in the performing arts was reinforced yesterday by a report released in Quebec titled Pour que les arts demeurent vivants (”So that the arts remain alive”).

It included stark results of a survey of 2,117 members of various Quebec artistic associations – for actors, musicians, directors, designers and playwrights – conducted this past December and January.

More than 43 per cent of the artists surveyed are exhibiting signs of major depression; 11.7 per cent have had suicidal thoughts in the last year. (That compares with seven per cent of the overall population in Quebec, according to La Presse.)

Meanwhile, the Union des Artistes, an organization that represents mostly French-speaking actors on stage and screen, told Le Devoir that, according its survey, close to 15 per cent of their members had experienced suicidal thoughts in the past year.

For more on what has been lost, I encourage you to read the reporting of my colleagues from over the weekend on how COVID-19 has affected the arts in Canada. It’s got some glimmers of hope in it as well. Hang in there.

It’s just over a year, too, since I launched this newsletter about theatre. What a sense of timing!

For my own mental health, however, it’s been really helpful to write this weekly dispatch highlighting all the incredible ways that stage artists have adapted and continued to be creative despite it all – from the early days of impromptu Zoom readings through more polished audio and video recordings, livestreams, high-tech interactive online experiments and performances delivered over the telephone or in the great outdoors. So thank you for subscribing and reading.

The online show I’m most looking forward to tuning into this week is The 7 Fingers’s Out of Order.

Back in September, this Montreal circus collective (known in French as Les 7 doigts de la main) went to work on a new show, set in a post-apocalyptic big top, that never made it in front of live audiences. It was filmed, however, and my favourite human-sized troupe of acrobats and tumblers promise the result is “a cinematographic work in its own right.” The Cultch in Vancouver is presenting the premiere this week from March 18 to 21, before the film goes on “tour” to Europe.

If you’re into star-studded online readings of screenplays, there’s one coming up on March 19 that sounds like it will be a lark.

Wil, penned by Dan Rosen, tells the entirely untrue story of the young William Shakespeare workshopping his new play Romeo and Juliet in 1590 at a summer stock theatre run in a certain castle in Denmark.

The cast includes Will and Grace’s Eric McCormack and major stars of Canadian classical theatre such as Colm Feore, André Sills, Lucy Peacock and Geraint Wyn Davies. The online performances are a fundraiser for the Actors Fund and the AFC (formerly the Actors’ Fund of Canada). 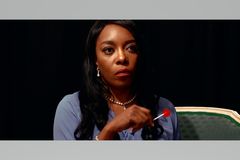 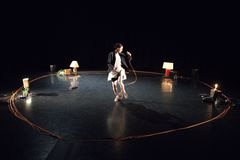 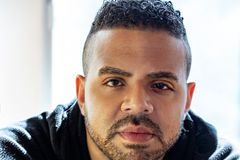