While there’s been much attention paid in recent weeks to theatres live-streaming shows online due to COVID-19, a number of stage artists have been turning to an older technology to keep performance alive in these unusual times: the telephone.

DLT, an innovative “audience specific” theatre company founded in Florence and now based in Toronto, first experimented with telephone calls in an immersive show created for the SummerWorks festival several years ago called The Invisible City.

Now, artistic director Daniele Bartolini has quickly set up a whole festival of programming available over the phone that he’s calling Theatre On-Call. It’s proved popular enough that he’s extended it to April 16.

You can e-mail his company to sign up for a call featuring an interactive story based on The Decameron, the 14th-century novellas by Italian author Giovanni Boccaccio in which young people tell stories while holed up in a villa during the plague; or another inspired by Dante’s Inferno; or to hear bedtime stories geared toward families (at 7:30 p.m. EDT) or adults (10 p.m. EDT).

This Sunday, actor Dayna Buonastella will be “phoning in” her adaptation of Jean Cocteau’s The Human Voice – and, in a long-distance call from Italy, the actor Anna Amadori will perform Un Colpo Di Telefono, “a playlist of texts that have left their mark on her and that reflect on the current situation in Italy.” The full schedule of pay-what-you-can telephone theatre – available for audiences of one up to a maximum of 10 – is on the DLT website at dltexperience.com/theatre-on-call.

Other immersive companies experimenting with theatre-over-the-phone right now are Outside the March (The Ministry of Mundane Mysteries) and Convergence Theatre (The Corona Variations).

Dismal news for fans of international theatre in Ontario and Quebec last week: Toronto’s Luminato festival cancelled its 2020 edition, while Montreal’s Festival TransAmériques announced that its international slate, at the very least, will not take place this year.

One consolation in this time, however, is that a lot of great world theatre is being made accessible online for free.

Britain’s National Theatre has been broadcasting performances to cinemas around the world for more than a decade now – but, with those theatres closed, they will now begin sending their plays into living rooms, too.

National Theatre at Home is uploading a recording of a previously broadcast performance to YouTube every Thursday at 7 p.m. U.K. time – which will then be free to stream for a week. The pandemic programming kicks off this week with One Man, Two Guvnors – Richard Bean’s hit 2011 English adaptation of the Italian classic The Servant of Two Masters. It stars James Corden – and his Tony-winning performance in this madcap comedy is what made him into the international star and late-night host he is today.

Berlin’s Schaubuhne, one of the theatres I love the most in the world, is making recordings from its archives available online every day from 6:30 pm until midnight (Germany time) – and many of the more recent productions are available with subtitles in English.

Streaming on Wednesday, I highly recommend artistic director Thomas Ostermeier’s production of Hamlet starring Lars Eidinger, who I called “the most frighteningly mad and unlikeable Hamlet I’ve ever seen.” That was a compliment, if it isn’t clear out of context. For more background on the company and the actor, here’s an article I wrote about Ostermeier’s work in 2013 – and an interview I conducted with Eidinger in 2015.

Wajdi Mouawad, the great Québécois playwright, has been living in France since 2016, where he is artistic director of Paris’s Théâtre national de La Colline. I had the great pleasure of visiting La Colline a year and a half ago to see Mouawad’s own breathtaking production of his latest hit epic, Tous des oiseaux.

While he is not streaming shows, Mouawad is recording a Journal de confinement – daily meditations on this unsettling time that are the product of his sharp mind and poetic soul. If you understand French, you can listen here and be consoled. Thank you to actor Alon Nashman, a superb interpreter of Mouawad’s characters who mostly recently starred in the English premiere of Tous des oiseaux at Stratford last summer, for pointing me to this site.

Finally, congratulations to all the winners of this year’s Merritt Awards, which celebrate excellence in Nova Scotia theatre, and which went ahead with an online ceremony on Monday.

It was a big night for black theatre creators as Neptune Theatre’s production of The Color Purple, a musical based on Alice Walker’s novel of the same name, was named Outstanding Production, and Shauntay Grant’s play The Bridge, a story of two brothers in a rural black community, was named Outstanding New Play by a Nova Scotian. You can replay the entire Merritt ceremony on Theatre Nova Scotia’s YouTube page. 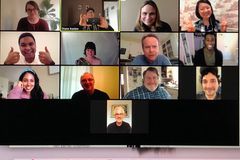 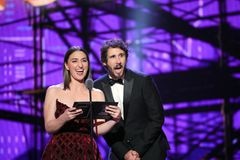