If you’re looking for a way to engage with the performing arts beyond what is streamable right now, have you considered learning how to perform yourself?

Amid the COVID-19 pandemic, the Second City Toronto comedy club is continuing to offer its popular classes in improv online. The current semester started on April 1, but you can book for a class in May now or take a drop-in.

If you listen to any podcast where Second City advertises, you’ve no doubt heard all about the transferable skills in teamwork and collaboration that you hone by learning improv principles (such as the famous “Yes, and...”). But their classes now have a new selling point: “Break up the routine of physical isolation/working from home.” A convincing pitch!

There are Second City classes in stand-up and comedy writing available online, too, as well as many specific niche ones such as FamilyProv, which is taught by Janet Davidson for “families of all sizes (and generations!) with children ages 8 and up.” (An alternative: Bad Dog, another Toronto comedy club that offers training, will also be taking its classes online soon – and is currently offering free drop-by improv jams for beginners online.)

Even if you’re not venturing out for walks right now, it’s probably a good idea to get up and move your body at home. Why not have a ballerina motivate you to do so?

The National Ballet of Canada normally opens its doors to the aspiring and amateurs by offering a number of dance and fitness classes through an initiative it calls In Studio. During the pandemic, however, you can find some of those classes online for free through the company’s Instagram page.

On Wednesday at noon EDT this week, Kate Kernaghan, the director of In Studio, offers a full-body workout called Get Moving From Home. On Friday at the same time, first soloist Tina Pereira will offer a ballet class.

And if you are an emerging or mid-career stage actor looking for a way to continue to work on your craft in isolation, Stratford Festival star and Groundling Company artistic director Graham Abbey and actor Dylan Trowbridge have just launched a new training site called Ghost Light – named after the tradition of leaving a light on in empty theatres overnight (either to appease the spirits or chase them away, depending on which origin story you believe). More details on mentorship opportunities are forthcoming, but stage legends such as Seana McKenna, Dion Johnstone and Jani Lauzon are confirmed to be participating.

If you’d rather watch Second City performers do improv than learn from them, the comedy club’s various franchises in Chicago, Hollywood and Toronto are livestreaming a show they’re calling Improv House Party a few nights a week right now. It’s free to watch, but the company is accepting donations to The Second City Alumni Fund.

On Thursday night is the Canadian couples edition – featuring a number of the country’s favourite shacked-up comedians: Colin Mochrie and Deb McGrath; Naomi Snieckus and Matt Baram; and Aurora Browne and Kris Siddiqi. Sandy Jobin-Bevans, who I guess had the good sense not to partner up with a Second City comedian ahead of COVID-19, hosts.

If you can’t get enough of Mochrie (of Whose Line is it Anyway? fame), you can also tune in to Murder at the Winterhouse!, which is being broadcast nightly this week on The Howland Company’s Instagram page.

Mochrie is one of a number of well-known faces (Kevin Vidal from Come From Away; Samantha Wan from Second Jen) in this virtual murder mystery written and hosted by the Toronto indie theatre company’s Ruth Goodwin and Liz Johnston. It’s interactive as well: If you’re the first viewer to guess who the murderer is correctly, you’ll win a $100 donation to the Actors Fund of Canada in your name.

The second-to-last performance I saw in person before performing-arts facilities started to close in Toronto was Angels’ Atlas, an exquisite new piece by choreographer Crystal Pite that was part of a triple-bill at the National Ballet. I tweeted recently about how it keeps replaying in my mind during the pandemic: “It feels like a piece of performance created for this moment. The beauty and vulnerability of humans in groups, the necessary danger of the link; a dance of love and care and death and survival.”

The National Ballet has since posted a short excerpt on YouTube, which you can watch here. 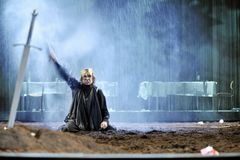 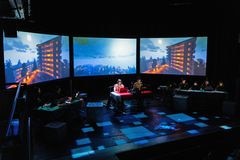