What is a cabaret, old chum?

The Stratford Festival’s outdoor musical shows this summer are being described as cabarets, but they haven’t quite fit the bill in my estimation.

I tend to think of the art form of cabaret as involving singers performing songs that are meaningful to them – and telling stories about the songs or themselves in between.

The first three cabarets that opened (and have now closed) at the Stratford Festival, however, were closer to concerts or revues.

Two of them (Why We Tell the Story and Play On!) involved somewhat perplexing setlists of showtunes or popular songs performed without any onstage explanation.

The tunes weren’t even introduced: You had to look up the titles, songwriters and original performers in the program. (Which you couldn’t do during the performance, of course, because there are only digital programs this season and you’re asked to turn your phone off.)

The third cabaret (You Can’t Stop the Beat) did explain itself as it went along – but, alas, did so with a cheesy script that involved the performers hiding behind caricatures, rather than revealing themselves.

The show’s theme (“the enduring power of musical theatre”) was much too broad; Stratford audiences are, surely, up for something more specific or sophisticated.

Freedom, which celebrates “the spirit and legacy of Black music,” is the most satisfying musical show to open so far at the Stratford Festival.

Beau Dixon, the curator and director, is on stage throughout – and while he doesn’t say too much, he says enough to carve a clear musical path from spirituals to gospel to blues to reggae to Motown to Beyoncé and Kendrick Lamar.

The show’s four electric performers – Robert Ball, Alana Bridgewater, Camille Eanga-Selenge and Dixon himself – excel in different genres, but they also cohere into a supergroup on some of the numbers, such as Stevie Wonder’s Black Man.

Is Freedom a cabaret though? For something more true to my idea of the form, I had to wander over to the Here For Now 2021 New Works Festival behind the Bruce Hotel.

So, how’s it been? is a new song cycle about life in Stratford during the pandemic. The lyrics are based on interviews Liza Balkan conducted with the cast and other local residents; Paul Shilton composed the music (with assists from Katherine Wheatley and Bruce Horak).

The performers – Marcus Nance, Barb Fulton, Trevor Patt and Evangelia Kambites – talk about their own lives and tell the stories of others during the pandemic, both in the songs and while introducing them.

I found this show simple, moving and intimate, with an honest connection forged between the artists and audience.

That’s cabaret, in my opinion.

Why We Tell the Story, Play On! and You Can’t Stop the Beat are now all streaming on Stratfest@Home. There are some show-stopping musical performances in all of them even if the overall architecture is shaky.

Freedom and So, how’s it been? both continue to Sept. 5.

Canadian Broadway star Chilina Kennedy is premiering a new musical she wrote with Eric Holmes titled Call It Love on the Player’s Backstage stage behind the Stratford Perth Museum on Friday.

It’s got a stellar cast that includes Dan Chameroy (Stratford Festival) and Robert Markus (Dear Evan Hansen). The Eclipse Theatre Company, which Kennedy runs as artistic producer, is not inviting reviewers to this “in concert” iteration – but it seemed worth mentioning nevertheless.

Crow’s Theatre wasn’t the only Canadian theatre company to drop a 2021-2022 season Tuesday morning. Theatre Calgary announced its own – set to begin on Oct. 19 with the world premiere of Rick Miller’s Boom YZ, the latest in his series of generationally themed solo shows. Some old reliables follow: A Christmas Carol, Steel Magnolias and Million Dollar Quartet.

The Centaur Theatre in Montreal (which also announced a 2021-2022 season last week) is presenting an Onishka and Imago Theatre co-production starting this week.

NB: As of Sept. 1, you need to show proof of vaccination to attend live shows in Quebec.

The vaccine passport makes me want to move back to Quebec. But I’m actually packing up and leaving Stratford to return home to Toronto this weekend. Goodbye, and thanks for all the Pretty Good Pizza!

Before I take off, however, I’ll be seeing Marcia Johnson’s new play Serving Elizabeth at the Stratford Festival on Thursday. Look for my review by the weekend.

Once I get back to Toronto, I’ll be seeing Jordan Tannahill’s Is My Microphone On? directed by Erin Brubacher at the Canadian Stage’s High Park Amphitheatre. Look for my review of that one after the long weekend. 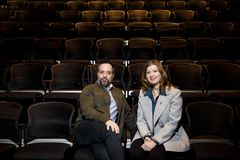 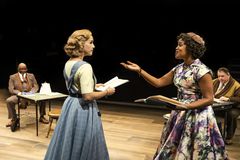 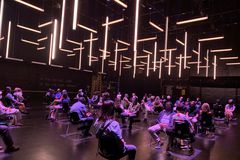