On Sunday, at Toronto's Cadillac Lounge, Remembrance Day will be marked in a rather unusual fashion: The Great Canadian Burlesque troupe is holding a "We Salute You, Veteran's Tribute" brunch, where the tassels on display won't be of the military type.

Fiona Flauntit, co-founder of the troupe, spoke to theatre critic J. Kelly Nestruck about how honouring veterans and the art of striptease will collide.

Okay, so set this up for me. How did this come about?

A year ago, I started doing Burlesque Brunches every second Sunday. November's happened to fall on Remembrance Day. We sat down, me and my troupe, and asked: "Should we do a brunch? Is it going to be controversial?" I decided: Let's do it, and let's make this a tribute to the veterans.

Remembrance Day tends to be a solemn occasion. How can burlesque fit into that?

Well, a lot of burlesque and vaudeville shows were going on in England while it was being bombed during the Second World War. There was the whole idea of: Keep Calm and Carry On. It's even in a Rita Hayworth movie [1945's Tonight and Every Night ] – they're doing a burlesque show and its getting bombed outside.

There was that recent Judi Dench movie on a similar subject, too. Mrs. Henderson Presents …

Yeah. For the troops too, they would bring in lady singers and – well, maybe they wouldn't be doing so much of a striptease, but there would be all kind of live performance to boost the morale. So, we decided, let's make this burlesque show themed along those lines.

What's your contribution to the show?

I'm going to be doing a Rosie the Riveter act to the song Rosie the Riveter . Actually, my grandmother, who is still alive in her 90th year, worked doing the rivets on airplanes during the war, so it was just too perfect.

How else is it going to be Remembrance Day themed? You're not going to end your act in a couple of poppy-shaped tassels, are you?

Actually … we probably will. One of the girls is going to do a balloon act, which is a classic burlesque act where she's covered in balloons and, as she pops them, she reveals a little bit more and a little bit more. We thought we'd do red balloons, themed as a poppy? None of the girls are going to be naked. It will be a classy and clean show, definitely nothing vulgar or raunchy.

This summer, a British burlesque performer, Jo Freestone, was briefly banned from fundraising for the Royal British Legion's Poppy Appeal because she was dressed as her burlesque character Major Outrage.

We haven't had any controversy – as of yet. We will see what happens on Sunday. But we decided that a portion of the proceeds will be donated to one of the Canadian legions in downtown Toronto. And veterans get in free. Anybody else, it's $15 at the door.

Will you be performing at 11 o'clock around the moment of silence?

No, no. Doors are at noon, show is at 1 o'clock. During that hour as people are coming in and sitting down, I'm going to be playing wartime music, jazz and big band from my grandfather's personal collection. My grandfather, Harold "Coakie" Coakwell, served in the Canadian infantry in World War Two and he passed away in September 2002. And I thought, what better way to pay tribute to him in memory and to all the vets.

Requiem for a generation: Suzanne Steele’s orchestral manoeuvres
May 9, 2018 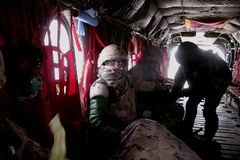 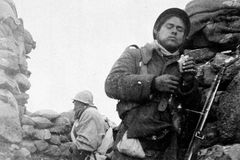 In the battlefields of France and Belgium, the ghosts still haunt
May 9, 2018 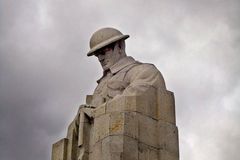 More stories worth remembering
May 9, 2018 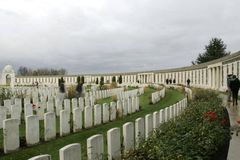 Canadian veterans reflect on life after war
May 9, 2018 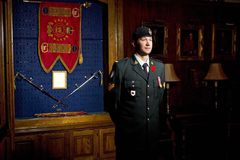 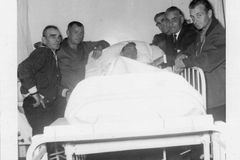