Ballet Jörgen Canada is celebrating its 25th anniversary with a charming production of Swan Lake. The company has a history of creating pocket versions of the classics, and Swan Lake is another little gem to add to its repertoire.

BJC's mandate is to bring ballet to cities and towns, large and small, across the country. So far the company has toured Swan Lake to 27 venues before touching down in home-base Toronto. The tour continues to five more cities after the Toronto run.

Artistic director Bengt Jörgen based his choreography after the ubiquitous version by Marius Petipa and Lev Ivanov, which debuted at St. Petersburg's Mariinsky Theatre in 1895. He has, however, given Swan Lake his own delightful touches.

Jörgen seems to be on a campaign to Canadianize his ballets, hence his Group of Seven Nutcracker. His Swan Lake is set in the Fortress of Louisbourg, which inspired designer Robert Doyle's 18th-century, French-themed costumes. The ballet is awash in lovely paisley and embroidered sateen fabrics.

Designer Camellia Koo's movable set pieces evoke the stone walls and dark forests of this historic Cape Breton settlement. Unfortunately, they are particularly stark, and seem on the cheap side in comparison to Doyle's lavish costumes.

Von Rothbart (Hiroto Saito) is half man, half wolf, and during the overture, Jorgen has put in a scene where the sorcerer turns a young bride (Saniya Abilmajineva) into the swan Odette. Her Prince Siegfried is guest artist Grigory Popov from the Mariinsky (Kirov) Ballet. The two dance beautifully together.

In any Swan Lake, the prima ballerina has to show both Odette's fragility, and her evil, alter-ego Odile's wickedness. Russian-trained Abilmajineva, who was born in Tashkent, Uzbekistan, is gorgeous in both roles. She is lyrical grace as Odette, and a crisp-of-attack, flinty-steel Odile. Her precision placement makes every movement crystal clear.

Popov proves to be a good partner, despite one booboo on release from a lift. He has great height on his jumps and can toss off Russian imperial-style turns with ease. Popov also has just the right amount of hauteur for the Prince, and enough acting chops to die in convincing fashion.

Jörgen's Swan Lake first debuted at Southern Ontario's Flato Markham Theatre last September, and it was rough-and-ready, to say the least. Twenty-seven cities later, the ballet has settled into an accomplished production. The wonder is that the dancers still manage to look fresh after such a long time on the road.

All the major Petipa/Ivanov vignettes are intact in the ballet, but in miniature. While major companies can mount a swan corps de ballet of 20 to 32 dancers, BJC fields 12. Jörgen, however, keeps his corps in motion, and their shifting patterns make it seem like many more ballerinas are on the stage.

By definition, character dances are the ethnic divertissements so popular in 19th-century Russian ballets. Jörgen captures these moments with less is more. His Spanish dance, for example, is reduced to a showy duet (Cristina Graziano and Daniel Da Silva) filled with intricate footwork for the ballerina and virtuoso jumps and spins for the man.

Jörgen has also added his own innovations. For example, he has given Von Rothbart six menacing minions who add a dark edge to the final scene. The sorcerer and Siegfried have a life-and-death struggle where they kill each other. It is a poignant moment when Siegfried sinks to his knees, gasping his last breath, and expiring in Odette's arms.

Part of the charm of Jörgen's Swan Lake is how he manages to keep intact all the beloved features of the Petipa/Ivanov version. Audiences from Chilliwack, B.C., to Wolfville, N.S., who attend these performances will see a traditional Swan Lake that captures the drama of Tchaikovsky's magnificent score, albeit, on a smaller scale. 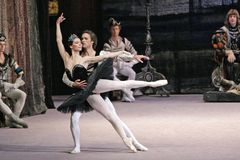 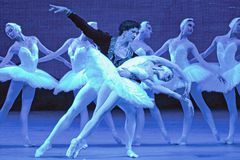 Ballet Jorgen co-founder says goodbye to company
May 11, 2018
Follow us on Twitter @globearts Opens in a new window
Report an error Editorial code of conduct
Due to technical reasons, we have temporarily removed commenting from our articles. We hope to have this fixed soon. Thank you for your patience. If you are looking to give feedback on our new site, please send it along to feedback@globeandmail.com. If you want to write a letter to the editor, please forward to letters@globeandmail.com.
Comments