I've often wondered whether there's a useful formal analogy between the first-person narrator and the solo performer. First-person prose can be so seductive in its intimacy and directness. When done well, we feel like we're in great company, happy to trade in breadth and variety for a bias we want to stick with, a voice that just sounds good.

But onstage, the risks are higher: It's hard for any one performer to bear full responsibility for being interesting – and to hold that interest for an hour (and beyond). While some of the most iconic dance pieces of the 20th century are solos, they often feel more "important" than exciting in hindsight – Martha Graham's Lamentation (and her constricting stretch-dress costume) comes to mind.

Dance is visual and the eye can be lazy; if the crowd scene is reduced to a portrait, what are we gaining by the narrowed view?

I found myself enthusiastically able to answer this question when I watched Belinda McGuire in rehearsal last week. She invited me to sit in on a run-through of Three Muses, a concert of four solos, which she'll be performing at the inaugural TOES For Dance Festival in Toronto from Dec. 11-13. Born and raised in Mississauga and a graduate of the renowned Juilliard School, McGuire has danced with some of the best contemporary companies in New York City (Jose Limon's dance company for five years, Doug Varone's company for two years and Gallim Dance for a year). In 2007, she started to pursue a solo career – now that solo career is her main focus.

"As a dancer, my solo work gives me less-diluted access to the materials that I'm working with. I like facing the music every day – there's a particular nervousness and anticipation that comes with working alone and I like the bigger picture of what that does to me. As a director, it makes me really efficient. I am my own repertory company – I choose whom I commission. As a choreographer, I'm in a better position to shape myself as an instrument. My solo work lets me rehearse for years, to slow-cook. I can be boring," she adds with a laugh, "and look deeper into smaller things for longer."

McGuire is petite, lithe and muscular, with a pale, heart-shaped face that really does make you think of one of Botticelli's Madonnas. By contrast, her tone is warm and no-nonsense – talking about her dancing, she gets wrapped up in an analogy involving power-steering versus a rickety old car. She tells me that the idea behind Three Muses was to invert the traditional choreographer-muse relationship. "The typical thinking is that there's something about a specific dancer that opens the choreographer and brings out work that is richer, more diverse. As a solo artist, I'm actively engaged in the reverse. I find that certain choreographers unleash some of the best stuff in me as a performer."

With Three Muses, McGuire's chosen three choreographers with whom she feels she has that kind of artistic chemistry. (The program includes a fourth piece, Fable, which McGuire choreographed herself.) The longest work is the 23-minute Anthem for the Living, which Canadian Sharon B. Moore choreographed for McGuire in 2011. McGuire describes the piece as a "total ballbuster," and a "stamina extravaganza."

McGuire danced Anthem for me without costume or set (she told me to imagine a series of ropes strewn across the studio). When she was finished, I found myself grasping for words to explain the weirdness and intensity of her performance. Nothing about my view had felt narrowed or zoomed-in on. McGuire made the piece feel less like a solo and more like a large ensemble work danced by one. Set to a dramatic orchestral score by Alexander Balanescu, Anthem looks like a Peter Greenaway movie on fast-forward, and McGuire seems to play a dozen parts that span centuries and styles. At one point, she is muttering to herself with the mannered gesticulations of a Baroque courtesan, an effect enhanced by her alabaster face and staccato acting. At another, she looks edgy and modern, shifting into a sequence of athletic splits on the floor.

"It was my nemesis at one point," McGuire says of the piece with a chuckle. "But I decided to embrace that – you know, keep your friends close, keep your enemies closer. And it has totally changed my body. I vowed to never get out of shape with it – I try to run it twice a week on average."

The rest of the program, which includes pieces by American choreographer Doug Varone and Israeli choreographer Idan Sharabi, gives us a textured showcase of McGuire's physical and emotional range. Like a great narrator, she's a dancer you want non-stop closeness to, that sustained feeling of intimacy in both stillness and motion. While her lexicon of movement is broad, I came to trust the power of her delivery – the sense of motivation, the possibility of surprise – in every step.

"It's the activity of change that I enjoy more than any of the actual stuff that I do. How a moment is gone as soon as it happens," she says. "As a choreographer, I tend to change the way movement is done before I change what movement is done. I think that tendency draws on my work as an interpreter and dancer. I see more potential in how rather than what."

TOES (The Outreach and Exchange Strategy) for Dance is an initiative that was started in 2012 by David Norsworthy and Kristen Carcone, two young dancers who are also from Mississauga. They've curated and produced a mixed-program of short work for the past three years, touring to several locations in the GTA. But 2015 brings TOES's first official festival, showcasing longer performances by two artists. Alongside Mcguire, the Canadian poet and actor Callahan Connor (a.k.a. the rapper C-Command) will be performing a 60-minute spoken-word piece called The Living Shh.

TOES for Dance Festival runs at the Aki Studio Theatre in Toronto from December 11-13.

‘Every step is of equal value’: Christopher House’s dance philosophy 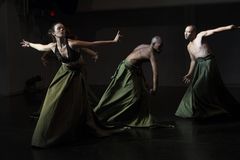 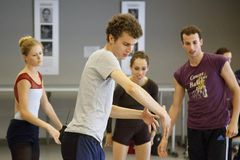 Yes, I'm a dance critic. And, no, I don't really like So You Think You Can Dance 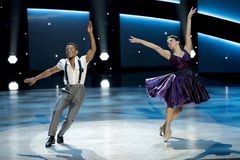