Rape, suicide, eye-gouging, baby-eating - by the end of Sarah Kane's Blasted, the audience, like Shakespeare's Macbeth, has "supp'd full with horrors."

In her brief life (she hanged herself at the age of 28 in 1999), the troubled, talented Kane wrote some of the most brazenly violent plays to be seen on the British stage since the Jacobean era. Blasted, her first and most infamous, has become legendary since its London premiere in 1995, when the press greeted it with howls of execration.

We have the new artistic director of Toronto's Buddies in Bad Times Theatre, Brendan Healy, to thank for finally mounting the play's first professional English-language production in Canada. And I'm not being sarcastic. Blasted, as the more discerning critics later realized, was no mere exercise in provocation, and in the past 15 years the scales have tipped entirely the other way. Kane is now considered to be one of the most important playwrights of her time.

Whether or not you agree with that assessment, you can't deny that Blasted is both gut-twisting and thought-provoking. And Healy, who has also directed the Buddies staging, has given it a spellbinding treatment. This isn't just in-yer-face theatre, it's pin-you-to-your-chair theatre too.

Kane begins, kitchen-sink style, with a sordid little scenario, and then blasts it open to probe the depths of human depravity in times of extremity.

A middle-aged man has brought a much younger woman to a posh hotel room in Leeds. He's Ian (David Ferry), a foul-mouthed, gin-swilling, racist tabloid reporter. She, evidently his sexual prey, is Cate (Michelle Monteith), an innocent but troubled young thing who stutters, sucks her thumb and, in moments of intense stress, lapses into seizures. But Kane doesn't simply make the pair predator and victim - the two share some sort of feeling for each other and the drink-sodden Ian is also a pathetic, dying man.

By play's end, the hotel room has been reduced to smoking rubble and Ian has become a wretched war victim, reduced to cannibalism to survive.

On its crudest level, one could see Blasted as a kind of revenge fantasy, with the scumbag Ian subjected to the cruelty and humiliation he both perpetrates as a sexual aggressor and revels in as a tabloid journalist. But Kane has a higher purpose in mind. She forces us to see the most appalling atrocities of war as the logical extension of the violent masculine behaviour accepted by society.

In Healy's textured production, we also see what playwright Caryl Churchill meant when she described Blasted as "rather a tender play." That's due in large part to Ferry's vulnerable performance as Ian. Even when he's swaggering about, dictating prurient copy for his paper with relish or spitting out ugly racial epithets, a pained-looking Ferry lets us know that his sleazy scribe is really a sad, sick man. He's as pitiful and desperate for love as he is monstrous.

Monteith counterbalances him, though, by making Ian's lover vividly childlike. Wearing a hoodie and a knapsack, her hair in a braid, Monteith's Cate could be a schoolgirl and her early scenes with Ferry are calculated to induce queasiness. They add a suggestion of pedophilia on top of all the play's other outrages.

The show is brilliantly designed. Julie Fox's set turns the theatre's stage into a rectangular aperture that slides open for each scene - the effect is like peering through the door of a cell to witness torture and degradation. The always excellent Richard Feren expands on the play's rain leitmotiv in his soundscape, blasting us with thunderclaps, ominous chords and deafening downpours. Kimberly Purtell's lighting descends into murk along with the play, finally giving us a series of gloomy, Goya-like tableaux.

Like Goya, Kane belongs to that line of artists who want to show us what we know exists but would rather not look at. Whatever private demons she was exorcizing in her work, they are demons we all reluctantly recognize. 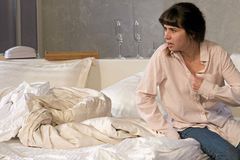 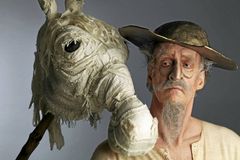 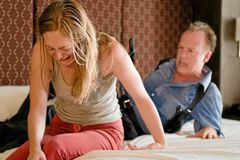