Blood Wedding may give away its tragic conclusion in its title, but the play nevertheless grabs you and holds you tight in Soheil Parsa's fascinatingly fatalistic production on at Buddies in Bad Times.

A fragment of a newspaper story is said to have inspired the poet and playwright Federico Garcia Lorca to write this 1933 poetic drama about family grudges and runaway brides among rural vineyards and olive groves in Spain.

When The Groom (Derek Kwan) asks his Mother (Beatriz Pizano) for her blessing to marry, she is skeptical about the union – having heard that the prospective bride once dated a young man from the Felix clan. Her husband and other son were both killed in fights with a Felix.

But The Mother reluctantly grants her permission after meeting the seemingly submissive Bride (Bahareh Yaraghi) and her Father (Steven Bush) for a short, sharp chat. Little does she know that Leonardo Felix (Carlos Gonzalez-Vio) continues to visit The Bride late at night, despite being married (to The Wife, played by Sochi Fried) and having one child and another on the way.

This is obviously not going to end well, but all the participants in the play blindly blunder toward disaster due to naiveté (The Groom), duty (The Bride), fatalism (The Mother), obliviousness (The Father) or denial (The Wife).

None of the characters gets a name except for Leonardo – whose barely suppressed bullishness Gonzalez-Vio captures perfectly – but Lorca's script only truly leaps into the realm of allegory after the wedding. That's when Parsa's production trips a little.

Up to that point, however, it is a model of precision. Trevor Schwellnus's design gives us semi-opaque windows and throws shapes of light that only illuminate strips of the stage. Like the characters, the audience sees and does not see what is about to happen.

Meanwhile, Parsa's diverse ensemble give heightened performances that find a nice balance between the poetic and parodic, between the riveting and the ridiculous.

Aside from Gonzalez-Vio, the standout tragicomic turn comes from Pizano as The Mother. She's outrageous in her over-the-top mourning of her late son and husband, but carries with her hard-won wisdom about life and what happens when a nice boy leaves the house with a knife.

Parsa's production doesn't quite navigate the shift that comes in Lorca's play (here in a translation by Langston Hughes) when the stage is suddenly filled with a Greek chorus of woodcutters and personifications of the Moon and Death. Having the striking Sochi Fried double as both Leonardo's sidelined Wife and the vengeful Moon gives the latter an interesting layer, but Liz Peterson's ghoulish personification of Death as a beggar is too much like an Edward Gorey caricature – and the tone tips over entirely when Parsa has the Moon and Death make out.

But the momentum of the first two-thirds of the production carries you through this hard-to-swallow patch to the gut-wrenching end. Blood Wedding is a collaboration between Modern Times Stage Company, led by the Iranian-Canadian director Parsa, and Aluna Theatre, a Latin-Canadian theatre company led by Pizano. What we see in their colourful combination is a quintessentially Canadian approach to the classics – one that isn't about a nebulous idea of diversity, but simply emphasizes the individuality of the performers.

Alice’s Adventures in Wonderland: Does this ballet stand the test of time?
March 16, 2015 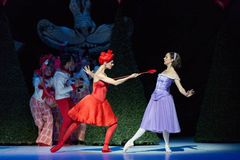 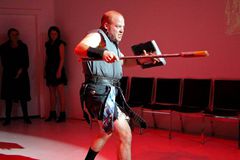 In Harper Regan, Molly Parker makes a bold return to the stage
March 6, 2015 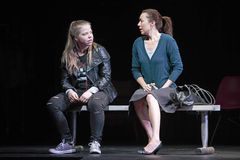