The Bolshoi Ballet is as advertised – classical to the max and with such depth in the ranks that every corps de ballet member could be a soloist.

Indeed, on the company's first trip to Toronto since 1979, we see a new generation of dancers impeccably trained in the Bolshoi tradition. And showing off that training in Swan Lake, that sine qua non of classical ballet.

When the Kirov came through last year, that storied company also performed Swan Lake, but a very different version. They brought Konstantin Sergeyev's 1950 interpretation, which retains much of the original 1895 choreography; the Bolshoi performs Yuri Grigorovich's 2001 version, which has many radical departures.

In fact, the Swan Lake that the Bolshoi dances is twice removed from the original ballet: Most of the mime is gone, as is the original story – instead, there is more dancing.

Prince Siegfried (Ruslan Skvortsov) still dreams of ideal love. He is lured to Swan Lake by the Evil Genius (Vladislav Lantratov), where he meets the beautiful Odette (Maria Alexandrova) and swears eternal love. When the Evil Genius shows up at the castle ball with Odile, a dead ringer for Odette, the prince thinks that she is his love. But when an image of a sorrowful Odette appears, the prince realizes that he has been duped. He rushes to the lake, too late – he has betrayed his ideal, Odette vanishes, and the prince is left alone with his shattered dreams.

Here though, wall-to-wall dancing overtakes the story's pageantry. The entrance of the prince's mother is a momentary halt, as is his knighting. Instead, right from the start, the prince is in motion. He has a solo that shows his longing, and performs a pretty pas de trois with two winsome ladies (Nina Kaptsova and Anastasia Stashkevich).

One of the best vignettes of this version is the duet between the prince and the Evil Genius. Siegfried is not aware of the latter's presence, but the Evil Genius lures him on as he shadows his every step. As the two perform the same movements, the Evil Genius executes hand gestures that indicate the prince is in his power.

The showy dancing in the first act, however, belongs to the Fool (Vyacheslav Lopatin). He is an astonishing dancer, a whirling top who moves faster than a speeding bullet. He is so supple that he seems to defy gravity. Lopatin belongs to that category known as the small fast guy. He's too short to be a prince, but he earns his applause through his technical wizardry.

Skvortsov, meanwhile, looks every inch the prince, and has an incredibly soft landing. His ballon, or lightness, is magical. There's only one problem: Although he dances a lot, his choreography is weak – even in the famous Black Swan pas de deux, his tricks are limited. The Evil Genius has showier dance steps, and Lantratov pulls them off with a crisp and assured attack.

As a result, Skvortsov's basic role is to look dreamy, and be the partner for the prima ballerina. This he does very well, for example, lifting her overhead with complete ease.

Which brings us to Alexandrova. The ballet belongs to Odette/Odile and the ballerina is perfection. Her Odette is gorgeous – fragile and ethereal. One feels the chemistry between her and the prince in the White Swan pas de deux, and she performs the role from the heart.

Alexandrova's Odile is equally astonishing. She bursts out with a torrent of energy and seems to perform her intricate footwork in double time. She radiates evil while she tosses off her tricks in the Black Swan variations with dispatch.

Of course, the corps de ballet dances beautifully, both men and women, but the swans win the day, with their perfect alignment and consummate grace. This version provides many solo roles, and the Bolshoi dancers show their mettle throughout.

Only the prince's choreography is the weak link. As for the ugly sets and costumes, the less said the better.

The Bolshoi Ballet continues in Toronto until Saturday. The company performs Don Quixote in Ottawa May 23-26. 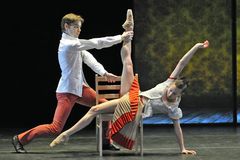