Jacques Brel Is Alive and Well and Living in Paris

Jacques Brel, I'm sorry to report, is actually not very well at all. Contrary to what you may have read on Stratford posters, the Belgian chansonnier who penned such classics as Amsterdam, Ne me quitte pas and Le Moribond died of lung cancer in 1978 and lies buried in the Marquesas Islands.

But the 1968 revue created out of his impassioned and wry chansons of love and death has been given fresh life at the Stratford Shakespeare Festival under the direction of Stafford Arima.

Arima, a Canadian boy who has made good in the West End and off-Broadway, has made a happy return home with this elegantly staged concert of Brel's tales of lying lovers, traumatic visits to brothels and hard-drinking sailors in the port of Amsterdam.

His production finds a fine balance between romantic readings of the songs, more comic interpretations and moments where vocal exhibitionism is allowed to reign.

Each of the four cast members - two men, two women - provides a different window into Brel and the English lyrics provided for his songs by Eric Blau and Mort Shuman, some of which translate the meaning fairly directly, others of which aim only to capture the underlying emotion.

With the advantage of cutting a fragile Gallic figure from the get-go, Tony-winner Brent Carver is the star and rightfully so. He immerses himself up to his neck in each song, turning them into one-act plays or, in the case of his moving rendition of My Childhood (Mon enfance), an epic.

Able to summon tears to his eyes in a single note, Carver does prioritize emotion over complete comprehensibility. But that's not necessarily a bad thing when dealing with translations - in a way, Carver does an end run around Blau and Shuman and straight to the heart of Brel. In Marieke, he even sings partly in Flemish - and while I have no idea what he was singing, it was absolutely wrenching and riveting.

Always a welcome presence in Stratford's musicals, Mike Nadajewski provides the comic relief for the evening, providing funny and physical takes on songs like Mathilde, in which he half-grudgingly returns to a woman who broke his heart and with the full knowledge that she will probably break it again.

Jewelle Blackman, who occasionally doubles on the violin, brings a fresh hybrid approach to this well-known music, adding a little soul to her vocal styling, but mixing in a French cabaret vibrato. She thrills with a dizzying rendition of Carousel (La Valse à mille temps), repeating the chorus at a faster speed over and over until the whole theatre threatens to topple over.

Last but not least, Nathalie Nadon provides a more traditional and elegant female take on Brel. She solos on Ne me quitte pas, singing in the original French, and makes it a real heartbreaker.

Blackman and Nadon also team up in French to sing an unusually jolly rendition of Le Moribond.

The only problem with these two dips into French is that bilingual audience members will long to hear Brel's original lyrics, having been given a taste. Some of Blau and Shuman's translations have come to feel dated and cheesy. If We Only Have Love is most stuck in the 1960s in a way Quand on n'a que l'amour is not - the uplifting hopefulness of Brel's original lyrics are turned into cringe-worthy, charity-single sentimentality about love melting guns and conquering "all time, all space, the sun and the stars." All that's missing is a nod to the dawning age of Aquarius. It's to the cast's credit that this song provided a stirring ending to the show, despite.

Rick Fox's authentic-sounding new arrangements and the quartet of musicians who play them are wonderful, while Katherine Lubienski's set is simple but quite striking: Brel's head pokes out through a hole in a wall plastered with posters and pictures as if he's peeking in on the performance from heaven (or hell). If he was capable of actually doing so, I have no doubt he'd be happy with this beautiful production.

Jacques Brel Is Alive and Well and Living in Paris runs at the Tom Patterson Theatre in Stratford, Ont., until Sept. 25. 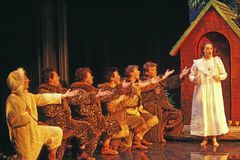