Who would have thought Geraint Wyn Davies's true acting triumph this season would be, not Falstaff, but King Arthur in a musical?

In a mostly marvellous production of Lerner and Loewe's Camelot, the Stratford company charmer takes Arthur on an interior journey that might befit a Shakespearean monarch, through youthful fears and growing confidence to become the commanding clear-eyed idealist who for "one brief shining moment" brings peace and justice to England.

Arthur's bittersweet speeches at the end of the first and second acts are the two pillars that keep this production aloft, and they are truly stirring. They're almost enough to make you overlook that Wyn Davies can hardly sing at all, and that even his speak-singing leaves a little to be desired.

This really opens up a whole series of tantalizing possibilities for Wyn Davies to break out of his character-actor box, though. Can we see his Richard II, please?

Based on T.H. White's tetralogy The Once and Future King, Camelot has been a popular but problem-plagued musical since its first 4-1/2 hour version premiered in Toronto in 1960. In this three-hour version, there's still enough plot for a half a dozen musicals: King Arthur's arranged marriage to Guenevere (Kaylee Harwood); his establishment of the Round Table; the love triangle with Lancelot (Jonathan Winsby); and Camelot's eventual downfall, engineered by Arthur's illegitimate son Mordred (Mike Nadajewski).

Director Gary Griffin - back again after West Side Story (2009) and Evita (2010) - has toyed around with the running order. His best idea is to start the second act with Fie on Goodness, inventively choreographed by Warren Carlyle, and show Arthur's knights rebelling even before the arrival of Mordred on the scene.

It adds a little sophistication to a overloaded musical that, for all its philosophical posturing, is rather simplistic - perhaps, even dangerously so. Seeing it immediately after the Shaw Festival's production of My Fair Lady, it's obvious that Lerner was aiming for Shavian paradox in his dialogue and kept falling short. Really, there's the benevolent dictator Arthur, who is portrayed as always right, and everyone else, who are obviously wrong.

Particularly after recent Western experiments in just wars, Arthur's "might for right" doctrine doesn't sound entirely appetizing. Neither is his revelation that "men die but an idea does not," as rousing as it is intended to be when you really think about it. It all depends, of course, on whether the dead man in question is JFK or Osama Bin Laden.

But there's no point in overthinking what is, for all the intelligence of Griffin's production, largely a summer escape into medieval fantasy. In the context of the show at least, Wyn Davies certainly had me convinced that his Arthur was, indeed, the fellow to run the world.

Harwood, making her debut on this side of the Prairies, is an excellent addition to Stratford Shakespeare Festival company - she gives feisty personality to the reluctant queen Guinevere and has a full, flavourful voice. Winsby is also a strong singer as the purity-obsessed Lancelot, even if he is utterly unconvincing as a Frenchman (the Gauls are getting the short end of the stick this season at Stratford). If he is on occasion a tad dull, well, Lancelot does admit that "all fanatics are bores."

Bravely ignoring his less than laudable history of musical wizards (see: Lord of the the Rings), Brent Carver appears as Arthur's surrogate father Merlin, then quickly vanishes on some all-too-visible strings. Later, Carver re-emerges as the older knight Pellinore and delivers one of his trademark performances: appealingly idiosyncratic, intermittently audible.

As for Nadajewski, his arrival on the stage as Mordred is a much-needed breath of fresh, comic air, but he goes on to wrap his pork chop of a performance in bacon and overdoses on ham in his solo The Seven Deadly Virtues.

For all my objections to the overall premise of Camelot, it becomes impossible not to succumb to this sumptuous production. As the high-minded King Arthur might suggest, resistance is feudal.

Camelot runs at the Stratford Shakespeare Festival until Oct. 30. 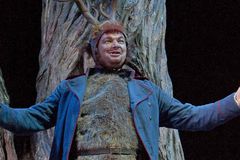 The many resurrections of Jesus Christ Superstar
May 27, 2011 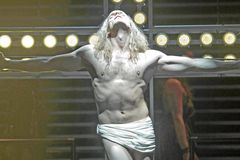 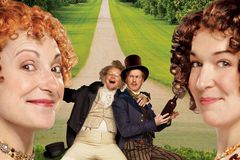