At the opening-night party for the Broadway musical Allegiance, the Arima family of Toronto seems especially excited to meet Lea Salonga.

In a packed restaurant on the edge of Bryant Park, they throng around the Tony Award-winning actress – she was, after all, the original Kim in Miss Saigon, the voice of Jasmine in Aladdin – and ask her for selfie after selfie. Stafford Arima, the Canadian director of the moving new musical about the internment of Japanese-Americans during the Second World War, observes the scene with a serene smile.

"You found my family," Arima says to me, and begins introducing the dozen or so proud relatives who came down for the opening – including his 88-year-old Japanese-Canadian father.

Ray Arima, along with his three siblings and mother, was interned during the war at the Slocan camp in the Interior of British Columbia. I ask if he could tell me what it was like watching Allegiance, having been through a similar ordeal in Canada himself.

"Thank you, but I don't think I can," the elder Arima declines. "Not without breaking down."

I came to New York to interview Stafford Arima on the eve of his Broadway debut as director.

But I didn't realize that he had an intensely personal connection to the subject matter brought to life in this $13-million production. After all, you can count the number of Canadians who have directed a musical on Broadway on one hand, and have fingers left over – and directors of Asian descent are not much more numerous in the famed commercial theatre district.

This York University grad – introduced to musical theatre at a young age by his late Chinese-Canadian mother, Daisy – began his career in Toronto, working his way up the old-fashioned way. From a part-time job as receptionist at Garth Drabinsky's Livent, he rose to become a resident director on that now-defunct company's Broadway production of Ragtime in 1998.

Since then, Arima has been based in the Big Apple – his most prominent credits being directing the West End premiere of Ragtime in London (a stripped-down version that earned him an Olivier nomination in 2004); the hit musical Altar Boyz, which ran for five years off-Broadway; and the first New York revival of Carrie – one that gave new life, off-Broadway, to the legendary Broadway flop. (The only show he's ever done in Canada was Jacques Brel Is Alive and Well and Living in Paris at the Stratford Festival in 2010; oddly, it's also the only offer he's ever received to work in his home country.)

As you can tell from those credits, Allegiance, then, is not only Arima's first Broadway show as director, but it's the first time he has ever tackled a show linked to his personal background. "I've never felt that my race has been an issue or a topic of discussion in any job that I've done," he says. "I consider myself Stafford, you know."

Indeed, the 46-year-old director had never really spoken with his family about what happened to them at Slocan during the war until he signed on to the project seven years ago. Arima had sometimes overheard talk of the "camp" as a child, but he didn't know what it was about. "I always thought they were referring to summer camp or something," he recalls.

That experience is not all that unusual among the children of internees – and that's part of the reason why George Takei, the actor better known to sci-fi fans as Sulu, has put his Star Trek power and the weight of his social-media presence behind Allegiance.

Takei, who plays grandfather Ojii-chan Kimura in the show, was one of 120,000 Japanese-Americans who were classified as "enemy aliens" and sent to internment camps after the bombing of Pearl Harbor at the end of 1941.

As Takei discovered at an earlier run of the show in San Diego, many young Japanese-American audience members knew about the internment, but few knew the specifics of what happened during those years – such as the loyalty questionnaire internees were forced to answer that divided families (as it does the fictional Kimura family in Allegiance).

"The people that experienced this, the parents and grandparents, were so pained by it – so hurt by it, and so ashamed by it – that they didn't share it with their children," Takei says.

Allan Arima, Stafford's 84-year-old uncle and Ray's brother, is the one who talks most freely about his family's story – and at Allegiance's opening-night party, he did so as partygoers milled around.

After Pearl Harbor, an estimated 22,000 Japanese-Canadians in British Columbia were, like their counterparts south of the border, viewed as enemies by the government, in contrast to German-Canadians or Italian-Canadians. The Arima family – living in Marpole, B.C., at the time – had their possessions confiscated and were sent, first, to Hastings Park – home to the Pacific National Exhibition – where they were herded into a horse stall.

Ten years old at the time, Allan Arima remembers feeling sad about losing his comic strips – and the stench of sleeping amid horse urine and feces. But, through the eyes of a young boy, he mostly viewed the internment as an adventure. It wasn't for his widowed mother, however, who died after the Arima family was shipped to Slocan, where medical facilities were lacking. Or his older sisters who then had to take over as head of the family. "The only bitterness I have is my mother dying in the camps; it's unforgivable," Allan Arima says now. "She was only 47 years old."

After the war, the Arima siblings – like other Japanese-Canadian internees – were not allowed to move back to Vancouver. They were given a choice – to be sent to Japan, or move east. The four headed to Hamilton and Toronto, where all of them are still live today – and where Stafford was eventually born and raised amid a burgeoning commercial musical-theatre scene.

The challenge for Allegiance's creative team was to transform real-life dramas like those of Takei and the Arimas into a satisfying musical. Stafford Arima was excited by the potential when he first met with the writers – but was clear-eyed that it was a long road ahead. "They gave me a script and I remember I said, 'This feels like a history lesson,'" he recalls. "I was honest in my feedback, which, inevitably, I discovered they loved."

While it remains to be seen if Allegiance will be a commercial success, Arima has cemented his reputation as an exacting director shepherding this major new show to Broadway. He put the composer Jay Kuo and writers Marc Acito and Lorenzo Thione through their paces – cutting whatever wasn't working. "There are more songs in the trunk now than are in the show," Kuo told me.

But Arima – who learned his craft not at grad school, but by observing the likes of Nicholas Hytner, Mike Ockrent and Hal Prince at work in Toronto – is also regarded as the calm at the eye of a storm he himself creates, according to Acito – who lovingly calls him "the Zen Panda."

Cast members like Salonga likewise praise Arima's "incredibly Zen and calm demeanour – even under the most stressful circumstances."

The Filipina superstar adds: "I will follow him to the ends of the Earth." Watching her politely indulge a string of selfies with a flashmob of Arimas down from Toronto, you believe it. 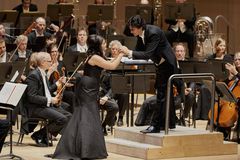 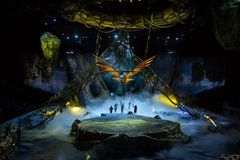 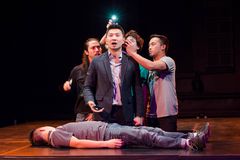