The proudly patriotic writer and composer pulled them on Tuesday morning – and an hour later, the Broadway musical he co-created with his wife, Irene Sankoff, was nominated for seven Tony Awards.

Come From Away, which dramatizes the true story of what happened when 38 planes were diverted to Gander, Nfld., on 9/11, is only the second Canadian-penned show to compete for best musical at the Tonys, the first since The Drowsy Chaperone in 2006.

Read more: How the couple behind Come From Away created a musical hit

Related: Come From Away goes home to Gander, Nfld. before heading to Broadway

Sankoff and Hein, the Toronto-based couple who collaborated on the words and music, are personally nominated for two awards: best book of a musical and best original score.

"Last night was like Christmas Eve, but we weren't sure if Christmas was coming," said Sankoff, who watched a livestream of the nomination announcement with her lucky-sock-wearing husband and their daughter, Molly, in the living room of the apartment they are currently renting on the Upper West Side of New York. "Today was like Mother's Day – everyone started phoning."

Seven Tony nominations are no small accomplishment: It was harder for to a musical to reach this point in 2017 than in any other Broadway season in recent memory.

The New York commercial theatre district has been unusually crowded in the first season after the juggernaut Hamilton, with 13 new musicals eligible for the Tony Awards. That fierce competition for theatregoers' dollars is reflected in the nominations – and an encouraging triumph for those who value original work over Hollywood studio-driven projects.

Natasha, Pierre & the Great Comet of 1812, Dave Malloy's immersive, electronica adaptation of War and Peace starring Josh Groban, is the most nominated of the new musicals – garnering 12 nods in total.

Come From Away's other two rivals for best musical are Dear Evan Hansen, an original musical by the Oscar-winning La La Land songwriters Benj Pasek and Justin Paul (which got nine nominations in total); and Groundhog Day, a musical adaptation of the Bill Murray film that won best new musical at London's Olivier Awards last month (and has seven nominations in total).

Unlike last year, when Hamilton garnered a record 16 Tony nominations, there's no clear front-runner for best musical – the most sought-after and potentially most profitable award.

"I don't envy anybody trying to choose between shows this season – they are all so different," Sankoff says. "I absolutely loved The Great Comet … How do you compare that to what we're doing to what's happening over at Groundhog Day and what's happening at Dear Evan Hansen?"

While Sankoff and Hein are Broadway novices from Canada, that doesn't mean their show doesn't have New York muscle behind it to help it during the upcoming campaign to win over the Tony Awards' 846 eligible voters.

Come From Away's lead producers are Junkyard Dog Productions, a well-liked group that was also the force behind the 2010 Tony winner Memphis.

A number of Canadians are also credited above the title as co-producers on Come From Away – including David Mirvish, who presented the musical at Toronto's Royal Alexandra Theatre immediately prior to Broadway – and share in Junkyard's nomination.

The most notable are Sheridan College in Oakville, Ont., and its associate dean Michael Rubinoff.

Come From Away was first developed at Sheridan with students in its musical theatre program as part of the college's Canadian Music Theatre Project – and, in fact, the idea to write a musical about the warm welcome 6,579 plane passengers stranded in Gander received after Sept. 11, 2001, was initially proposed to Sankoff and Hein by Rubinoff.

"We believe we're the first postsecondary institution in the history of the Tony Awards (and certainly the only Canadian one) to have a Tony Award nomination for best musical, to our name," said Dr. Mary Preece, Sheridan's president and vice-chancellor, in a press release sent out Tuesday.

It is, indeed, an unusual accomplishment for an educational institution: In addition to subsidizing the initial workshop, Sheridan also invested money in the Broadway production of Come From Away according to Rubinoff, who is also credited as "creative consultant" on the show. He declined to give exact figures of Sheridan's investment in Come From Away.

If the musical recoups, profits will flow back to the school – though Rubinoff says it is unclear where exactly they will go. "To be honest, we just haven't had those discussions," says Rubinoff, who watched the Tony nominations come in at the Royal Canadian Legion in Gander alongside Mayor Claude Elliott and many of the Newfoundlanders who inspired characters in the show.

Profits are, indeed, still a ways off for Come From Away, which cost an estimated $12-million (U.S.) to get to Broadway. Based on strong reviews and word of mouth, the musical is doing very well financially in New York – grossing more than $1-million a week at the box office – but it will need to keep it up into the fall to recoup.

A Tony nomination for best musical will help with that, as the show is guaranteed free advertising – a slot to perform a number on the televised broadcast on CBS on June 11 in a ceremony hosted by Kevin Spacey.

But beyond potential financial rewards for its Canadian creators and investors, Come From Away's award nominations in New York – it's also up for nine Drama Desk awards and seven Outer Critics Circle Awards – are major encouragement for those creating musical theatre in this country.

"This is a rare, very rare and wonderful thing," Rubinoff said. "Five Canadian musicals have made it to Broadway – and this is the second nominated for best musical. I think this is really significant for our community, especially that this is a story that's based in Canada and in Newfoundland and Labrador." 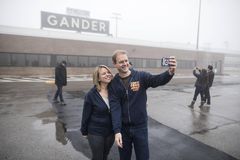 Come From Away scores seven Outer Critics Circle nominations
April 25, 2017
Review
Come From Away garners nine Drama Desk Award nominations
April 27, 2017
Follow J. Kelly Nestruck on Twitter @nestruck
Report an error Editorial code of conduct
Due to technical reasons, we have temporarily removed commenting from our articles. We hope to have this fixed soon. Thank you for your patience. If you are looking to give feedback on our new site, please send it along to feedback@globeandmail.com. If you want to write a letter to the editor, please forward to letters@globeandmail.com.
Comments