'What's wrong with Canadian plays?" asked a prominent American theatre commentator in a widely circulated blog post last summer – nearly causing an outbreak of familiar cultural cringe on this side of the border. "Quick, name five modern Canadian playwrights," Howard Sherman, former executive director of the American Theatre Wing in New York, challenged his readers in the online journal HowlRound. "Having trouble? I bet you are."

But, in fact, it wasn't such a sure bet: Carey Perloff, director of San Francisco's American Conservatory Theater, soon launched a passionate counterattack. Turning Sherman's leading question around, as only an American could, she jumped in and asked instead: What is wrong with U.S. theatres that so few are paying attention to Canadian plays?

Her answer: a regional theatre movement that is adrift, and, like the mainstream media, obsessed with what's already been given the stamp of approval in New York, rather than the new, the unfamiliar or the international.

"Wow, Howard, we do Canadian work ALL THE TIME at A.C.T.!" Perloff wrote. "There's so much juice happening across Canada, it's really a shame that we are still such obsessive anglophiles but can't seem to look north."

Over the past decade, she has become perhaps the most prominent champion of Canadian theatre in the United States. This month, George F. Walker's Dead Metaphor – a dark comedy about a returning war veteran, which was pulled from Toronto's Factory Theatre in an artistic boycott last summer – will have its world premiere at her 1,000-seat theatre.

That follows on the heels of A.C.T. mainstage productions of Morris Panych's Vigil and Michel Tremblay's For the Pleasure of Seeing Her Again (both starring Oscar winner Olympia Dukakis), as well Wajdi Mouawad's Scorched (with Oscar nominee David Strathairn). Add in co-productions or presentations of shows with the Stratford Festival, Theatre Calgary and Vancouver's Electric Company Theatre – and a flood of visits from actors familiar from Ontario's Stratford and Shaw Festivals – and San Francisco theatregoers have had significant exposure to top artists of the Canadian stage.

While this outspoken, fast-talking, East Coast-raised, West Coast-based artistic director has proved a feisty ally, however, there remains the question of why A.C.T. is the exception rather the rule when it comes to our scripts invading the United States. The same could be asked about theatres in Britain, who remain all but oblivious to us. Indeed, the question was asked, when Sherman's provocative blog post prompted similar ones from British writers at The Guardian newspaper and The Stage magazine.

It has long been thus for Canadian playwrights in the two major English-language theatre capitals, says playwright Walker, who says he admires Perloff's exploring mind. "I used to call it the river: The flow was between London and New York, and we were on the banks watching things float by."

One long-standing argument involves the notion that those Canadian theatre companies with the greatest resources and most international prominence – Stratford and Shaw – are primarily devoted to dead playwrights rather than living, local ones. (Indeed, it's a point that Sherman made in his posting.)

In the case of A.C.T., however, Canada's well-trained classical companies have actually helped prime the flow of playwrights down to California. Perloff and her former executive director Heather Kitchen – whom she hired away from Edmonton's Citadel in 1996 – shared a love of acting companies, and Perloff's interest in all aspects of Canadian theatre increased around the time the pair began hiring actors from Stratford and Shaw, starting with Gord Rand, for the American premiere of Tom Stoppard's The Invention of Love in 2000.

"[Canadian actors] are incredibly lucky in that they get to do eight months a year, eight times a week, in a big theatre, these classical plays, so their muscle is very honed," says Perloff, who recently brought Stratford star Seana McKenna down to teach at her theatre's affiliated MFA program.

While there are occasionally protectionist grumbles about American actors or directors who come to work in Canada, a reciprocal exchange of artists is really the strongest way to encourage the production of both American and Canadian plays outside the Broadway-West End axis. Panych – whose Vigil and physical theatre piece The Overcoat (with Wendy Gorling) have both been successes at A.C.T. – says that having agents sending out scripts cold is not effective. "You have to know somebody or make some sort of connection," he says. "It's a radar thing like anything else."

It's not just in terms of Canadian content that Perloff is an outlier. She may rock a Margaret Thatcher coif, but the 53-year-old takes pride in keeping her organization (which has a $20-million annual budget and is debt-free) true to the original ideals of the regional-theatre movement that emerged in the mid 20th century as an alternative to – rather than an extension of – Broadway. She has a resident company of actors and is as likely to program a Greek tragedy or movement piece as a show that was a hit in New York. And she eschews what she calls "schlock commercial theatre." Says Perloff, "I know everybody else is doing it, but I feel very strongly that there has to be another path for the non-profit theatre."

She is particularly negative about what is called "commercial enhancement money," whereby New York producers offer cash – sometimes millions of dollars – to non-profit regionals to mount their Broadway musicals-in-progress. The arrangement is seen as win-win by many, but Perloff regrets having engaged in the practice – albeit "very occasionally" – saying it hands a theatre's hard-won subscribers and reputation to someone with a different agenda. "It has killed the American regional theatre," she says, bluntly.

Those same commercial pressures barely exist within the non-profit sphere in Canada – and, for Perloff, that leads to what's right about "idiosyncratic" Canadian playwriting. "I sometimes find it less literal and naturalistic and television-driven than American writing," she says. "I don't think the metrics of successful theatre is 'Does the play move to Broadway?' "

Theatre Review
Rosencrantz and Guildenstern Are Dead: Pleasurable staging of a modern classic
May 11, 2018 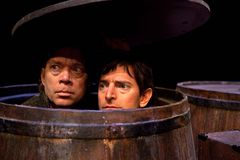 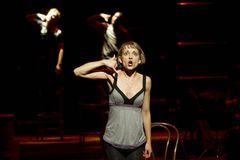