An unlikely influx of come-from-aways flooded into Gander, Nfld., again this weekend – but this time around, the planes landing at Gander International Airport carried the cast, crew and producers of a musical making a special pit stop on the way to Broadway.

Come From Away, Toronto composer-and-lyricist team Irene Sankoff and David Hein's emotional new show set in this small Newfoundland town in the days following the terrorist attacks of Sept. 11, 2001, was presented in two benefit concert performances on Saturday at a makeshift theatre set up in the hockey rink at Gander's Steele Community Centre. A combined audience of 5,000 people packed in to see the show in advance of its upcoming commercial runs in Toronto and New York – where it will be only the fifth Canadian-penned musical to reach Broadway.

If the Canadian creators and American producers were nervous about how the Gander characters and accents would be received by those who know, their worries quickly evaporated at the sold-out matinee – where locals gave the show a welcome as warm as the one they extended to the 6,600 passengers of 38 planes stranded here for a week after the Twin Towers fell 15 years ago.

"We feel blessed now," Astrid Van Wieren, one of three Canadians in the twelve-person Come From Away cast, said the next morning at the Tim Hortons on Airport Blvd., where the opening scene of the musical takes place. "When [the audience] erupted in the middle of our first song, when we were singing, 'I am an Islander' – I was done. It was really hard to keep it together."

Petrina Bromley, the sole Newfoundlander in the Come From Away cast, was greeted as a rock star by spectators sitting in the hockey stands and on folding chairs set up at ice level when she stepped up to the microphone to speak her first words in character as a real-life Gander SPCA employee named Bonnie Harris – who looked after dogs, cats and two bonobo apes in an airplane hangar while their owners were hosted at local schools and town halls.

Regular waves of laughter of recognition followed at local references – from the town mascot Commander Gander to the Newfoundland delicacy known as toutons – and tears could be seen all around during the show's more emotional moments.

A standing ovation began during the final number and lasted through the curtain call.

Claude Elliott, who has been mayor of Gander since 1996 and is one of several real-life locals portrayed by American actor Joel Hatch in Tony-nominated director Christopher Ashley's production, was among those moved by the show – even getting up on stage to dance with the actors at the evening curtain call.

"Yeah, it was a bit crazy – I had a senior moment," joked Mr. Elliott, a beloved local figure who has announced that he will not run for re-election as mayor at the end of this term. "There were people there from all across the province and they were blown away. … It was something I think they weren't expecting: This is a Broadway show, so it's not every day you get that coming through your community."

Notables in attendance included Dwight Ball, the premier of Newfoundland and Labrador; Frank Fagan, the province's Lieutenant Governor; and Bruce Heyman, the United States ambassador to Canada. But most of the $20 tickets – a fraction of the cost on Broadway, where orchestra seats will start at $99 (U.S.) – were sold to locals from Gander and surrounding towns such as Appleton, Norris Arm and Gambo who saw themselves onstage in semi-fictionalized form.

A team of 140 actors, musicians, technicians, producers and investors from the $12-million musical – which will have had a run at Toronto's Royal Alexandra Theatre from Nov. 15 to Jan. 8 before it opens in New York in February – had travelled to Gander in advance of the performances. Executive producers Junkyard Dog carried the cost of the stripped-down presentations to give back to the community that inspired it – with Mirvish Productions in Toronto, the Atlantic Canada Opportunities Agency and the U.S. embassy in Ottawa pitching in for travel and ancillary costs.

Every cent of the box-office revenue was set to go to charities chosen by the local communities, from the Salvation Army Food Bank in Gander to Gambo's Smallwood Academy Breakfast Program/Positive Behaviour Support. The amount has not been tallied yet – but Michael Rubinoff, associate dean at Oakville, Ont.'s Sheridan College where the musical was first workshopped before acclaimed pre-Broadway runs in La Jolla, Calif., Seattle and Washington, D.C., said that he hoped each charity would receive around $10,000.

Gander's population has grown since 2001 to close to 14,000, according to Mr. Elliott – and those new to town also expressed pride at the story told on stage. Talal Ibrahim, a refugee from Syria, had Googled Gander before arriving in town with his wife and two children 40 days ago and knew of the events of 15 years ago, but seeing Ms. Sankoff and Mr. Hein's interpretation gave it new resonance.

"For me, it was [a] normal story until today when I saw the play," said Mr. Ibrahim, one of four Syrian refugee families in town. "I lived the moment and I imagined myself on that day – so it makes me really proud to be here in Gander." 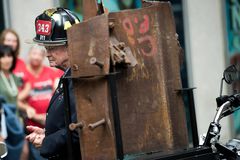 Canadian musical Come from Away to land on Broadway in February
July 21, 2016 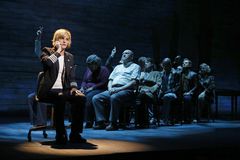 A place apart: The abiding power of Newfoundland’s fierce spirit of separateness
September 4, 2016 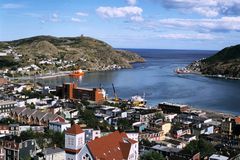