True story: So, in a suburb north of Toronto, these two teenage girls head out to smoke a joint in an old abandoned greenhouse – you know, Concord Floral, the one in Vaughan? And while fumbling around in the dark looking for a lighter, they stumble upon a body.

One girl screams and drops her phone – and the device not only falls onto the body, but actually sinks into it, glowing from within the decaying corpse like a soul.

The two teens run away without it, of course, and they don't tell their parents anything. But the next night, while she's getting ready for bed, the other girl's phone rings. And guess whose number is on the call display?

In his new play, Concord Floral, Jordan Tannahill invents a very modern suburban legend – but he has more in mind than just sending chills down spines with tales of supernatural cellphone horror. He wants to confront audiences of all ages with something much scarier: the realities of being a teenager in our preapocalyptic times.

"All parents are a little stupid," says one of the teens in the play, which is cast with 10 actors between the ages of 16 and 21. "They need to make themselves that way or they'll go insane worrying about all the things they secretly know to be true."

Tannahill, who runs a theatre company called Suburban Beast and a tiny venue in Kensington Market called VideoFag, has hit his stride. His work as a director is gaining acclaim (his staging of Sheila Heti's All Our Happy Days are Stupid heads to New York in 2015), as are his plays (productions of Late Company, at the Manitoba Theatre Centre, and Post Eden, at the National Arts Centre, are opening next year). Last week, he was nominated for a Governor-General's Literary Award for Age of Minority, a collection of three solo shows featuring young protagonists.

Still just 26 years old, Tannahill seems to recall the language of teenagers vividly – and, originally from the outskirts of Ottawa, he's intimate with the textures of the suburbs. In his hands, there's nothing dull about them: He creates rich, Gothic landscapes for his plays, where lines blur unsettlingly – not just between urban and rural, but between child and adult, civilization and nature, and reality and fiction.

Concord Floral, named after an actual abandoned greenhouse and developed over the course of several years with teens, is written like a documentary play, with short, sharp scenes of dialogue mixed with bursts of direct testimonial. The point of view shifts between the 10 teenagers – as well as the occasional animal or inanimate object that bears witness to their experiments with drugs or battles with depression or hook-ups arranged with older strangers over Craigslist. (The cast composition – seven young women; three young men – and plague-inspired atmosphere are inspired by a classic of 14th century Italian literature – yes, it's The Decameron meets Degrassi.)

On a rectangular lawn of Astroturf, Tannahill – along with co-directors and co-creators Erin Brubacher and Cara Spooner – has put together a production that is slickly designed, featuring sinister sound by Christopher Willes and spooky lights by Kimberly Purtell.

The acting is the only thing left unpolished. The decision to cast actual teenagers in a scripted play has pros and cons, as you might expect. Many in the cast – notably Jessica Munk and Erum Khan, who play the two teen girls – are excellent, though others are more limited in range.

But the roughness of these see-through performances is part of the appeal of the show (which I saw in its second-to-last preview). I could imagine a sleeker production with fresh theatre-school grads, but having real teenage bodies on stage and in peril adds to the hair-raising atmosphere. The authentic phenomenology results in a deeper creepiness familiar from fake found-footage horror movies such as The Blair Witch Project. In the lobby of the Theatre Centre, pictures, taken by Brubacher, of the actors in their actual bedrooms adds to that aesthetic.

For a play that uses an iPhone as a central plot device, Concord Floral perhaps misses a beat or two in topicality – bullying is a big theme, but it's kept to the corporeal rather than cyber spheres. Yet direct references to high-profile teen tragedies might diminish the impact, and it's worth remembering that youth have always harassed and shamed one another – we just can detect the traces more easily now.

Concord Floral is the strongest script from Tannahill to date – artfully structured, yet full of suspense, with dialogue that shifts smoothly between the poetic and observational. It's got style and substance – and is scary as all get out. Like any urban legend, you know it's made up … but is it?

Also on stage: The Art of Building a Bunker, the season-opener at Factory Theatre, digs into our anxieties about coming plagues as well.

Elvis Goldstein, a civil servant, is worried about Ebola, climate change, the Islamic State and the disappearance of bees – and he takes out his fears and frustrations on those around him.

And so Elvis, played by co-creator Adam Lazarus, who also plays the rest of the characters in this solo show, has been forced to take a week-long sensitivity training program run by a guy named Cam, who overuses canoe metaphors and the word "Namaste."

We never hear what Elvis's specific crime was, which places this off-beat work in the realm of the Kafkaesque. But there's no doubting that he is insensitive: Elvis despises everyone on his commute – from autistic children to a Portuguese woman with too many bags – and in his internal monologues, he seems deeply comfortable with epithets both racial and sexual.

According to a program note, The Art of Building a Bunker, co-written and directed by Guillermo Verdecchia, is a collaboration that came out of "exploring the limits of bouffon performance" – a satirical, confrontational offshoot of clown – "and its intersection with narrative theatre."

The narrative stuff doesn't really come together – and Elvis's week of sensitivity sessions, with a group of characters of various races and genders portrayed insensitively-on-purpose by Lazarus, passes slowly. The tone is comedic, but it's not particularly funny. Elvis's adolescent outbursts are too bald-faced and impotent to really be threatening – to either the audience's sense of superiority, or to others in his fictional world.

Where The Art of Building a Bunker, which I saw in its final preview, gets intriguing is in a final section where Elvis has a meltdown. Lazarus launches into a tour-de-force monologue about a confrontation between Elvis and a black neighbour that segues into a list of irritations and prejudices that alternates, unsettlingly, between relatable and racist. Elvis may be white, but he doesn't feel privileged – all he feels is fear for himself and his family. Here, in the end, he's no longer a straw man – and the work becomes truly provocative.

Concord Floral continues until Oct. 26. Visit theatrecentre.org for tickets. The Art of Building a Bunker continues to Nov. 2. Visit factorytheatre.ca.

Why this Toronto theatre isn’t inviting critics to opening night
September 26, 2014
Theatre Review
What Makes a Man: A revue of Charles Aznavour that’s out of focus
October 10, 2014 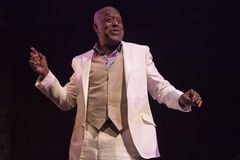 Ben Heppner to star in Titanic musical in Toronto
October 8, 2014 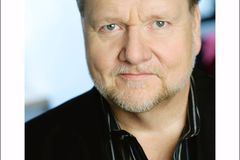