Wolfgang Amadeus Mozart was immensely proud of the score to his late-ish opera Cosi fan tutte. And with good reason. Cosi is perhaps the most direct score that Mozart ever wrote. It is also his most ambiguous. And that's no contradiction. Because ambiguity and the search for truth is built into the bones of Cosi fan tutte.

On the surface, a tale of comic sexual escapades and typical 18th-century mistaken identities (two soldiers try to woo each other's sweethearts on a bet), in the hands of Mozart and his librettist, Lorenzo Da Ponte, Cosi becomes a story about which feelings are true, which feigned; what emotions are central to a person, which put on for society. Just a decade or so before the Romantic era changed our ideas about the value of love, Cosi fan tutte provided opera goers a look at the power of the erotic, at one moment comic, at the next, harrowing. No wonder it proved unsettling to its original audiences.

A successful production of Cosi has to run on the brilliant, clockwork comic and musical energy unleashed by Mozart and Da Ponte, and by and large, this new COC production, directed by Atom Egoyan and designed by Debra Hanson, does the trick. Egoyan has added his own signature to the Cosi canvas, primarily by featuring the symbolism of a Frida Kahlo painting, The Two Fridas, and by taking the subtitle of the opera The School For Lovers, literally. A chorus of schoolkids follow the main characters around the stage, being schooled in the ways of love. And while the extra dimensions Egoyan has added to the production don't always work, they seldom get completely in the way, and often add extra insight.

But Cosi is basically a chamber piece, for just six voices, so the singing is what makes the show, and the COC cast acquitted themselves, by and large, extremely well. Layla Claire was a wonderful Fiordiligi, the elder of the tempted sisters, acting and singing her role with humour when needed, depth when called for. Her second act aria, Per pieta, was superb, sung as the two sisters put aside the Betty and Veronica masks they've worn in Act 1 and become real people before our astonished eyes and ears. Claire's female partner, Wallis Giunta, was an adorable Dorabella, earthier, sexier, and more willing than her sister, beautifully acted as well as sung. I didn't think their male counterparts, Paul Appleby and Robert Gleadow, were quite up to the same standards. There was a bit of strain in Appleby's Ferrando from time to time, although both he and Gleadow had fine moments throughout the evening. Tracy Dahl was lively and funny as Despina, the sister's maid, and Sir Thomas Allen acted and sang his Don Alfonso well, the ringmaster of the charade(there are few real arias for Alfonso), although to my mind, Alfonso might have been portrayed a lot more creepily and cynically than he was.

As is becoming customary for COC productions, the orchestra under Johannes Debus (leading his first Cosi) was more than up to the musical task, allowing the beautiful ambiguity of Mozart's music to lead us into unexpected emotional territory. All in all, this COC production captures the complex spirit of its original creators at mostly full force, which makes it a production worth seeing. 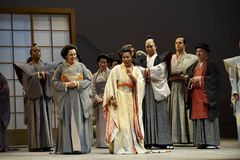 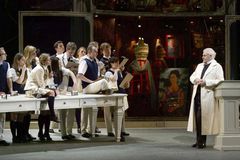 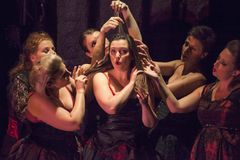