The Canadian co-creators of the Broadway smash Come From Away have collected many awards this year, but they insist getting a Grammy nomination on Tuesday was a complete surprise.

Irene Sankoff, one half of the married couple behind the Newfoundland-set production, says she was still sleeping when husband David Hein awoke her to reveal they were in the running for the best musical theatre album award.

"Wake up, Grammy nominee," Hein told his wife as he returned home from dropping their daughter at school.

"There's been a lot of very excited cheering going on."

The duo are in good company with plenty of other Canadians vying for Grammys in other categories. Some of the biggest names include Justin Bieber, Alessia Cara, the late Leonard Cohen and the Weeknd.

The Grammys will mark its 60th anniversary in New York City on Jan. 28, 2018, rather than at the usual venue in Los Angeles.

A nomination for Come From Away – the uplifting story of strangers who united in Gander, N.L., after planes were grounded in the wake of 9/11 – carries a certain significance for the creators. The original cast recording was completed last December during a frantic time as they prepared for their Broadway opening while juggling other events.

"We'd just got back from Gander and were so exhausted and so focused and so stressed," Sankoff said.

Part of the challenge was shrinking the musical into a concise album that captured the spirit of the live production. The play features 12 actors on stage for the entire show, which meant replicating their energy in a studio took some unique measures. They arranged the cast in a semi-circle of recording booths so they could see each other as they sang.

Unconventional instruments like an ugly stick – a Newfoundland favourite that's fashioned out of a mop handle and bottle caps – and the one-handed Irish bodhran drum brought a particularly Canadian flavour to the recording.

The co-creators also threw a curveball to one of the cast members during the final days in the studio. After meeting one of the real-life people stranded in Gander they were inspired to add the new song "I Am Here."

"(We were) writing things on sticky notes ... and putting them in front of her," Sankoff said. "She would just do it, she was so focused."

Among the other Grammy nominees, Bieber is up for his vocal contributions to "Despacito," the massive global hit by Luis Fonsi and Daddy Yankee. The track is in the running for record of the year, song of the year, and best pop duo and group performance.

Cara is also nominated in the song of the year category for "1-800-273-8255," a song she co-wrote and performs with rapper Logic. The song, named for the U.S. suicide prevention hotline, is also nominated for best music video. She grabbed two other nods for the best new artist award and best pop duo and group performance for the song "Stay" with Zedd.

"Really honoured to be given this kind of acknowledgment," Cara said in a tweet. "I'm not sure what to say or feel at the moment, but for now, thank you to everyone in my corner for all your love."

Cohen is nominated in the best rock performance category for his song "You Want It Darker" and for best American roots performance for the track "Steer Your Way," both off his final album.

Grabbing spots in the best traditional pop vocal album category are Michael Buble for the deluxe edition of Nobody But Me and Sarah McLachlan's second Christmas album Wonderland.

"I put out that record out last year, did a little tour with it, haven't even thought about it, and – oh, someone's still thinking about it," McLachlan said.

She has pocketed three Grammys over her career and now has a total of 14 nominations. She was last nominated for her 2006 holiday album Wintersong.

"I haven't been nominated for a Grammy for a good chunk of change, so it's nice," she said.

"It reminds people there's a Christmas album out there they might want to hear."

Sound engineer Charles Moniz grabbed three nominations for his work on the Bruno Mars album 24K Magic, including best record and album of the year nods. The Burlington, Ont., native already has two Grammys on his mantle, one for creating the catchy "doh" vocal line on the inescapable hit "Uptown Funk" and another for his contribution to Adele's album 25.

Among the Canadian snubs was Shania Twain's Now, her hyped return to the studio after 15 years that was released in September just before the Grammy qualification deadline.

The Weeknd's Starboy also fell short of expectations by only scoring a nomination for best urban contemporary album, despite his performing two songs from the album at last year's ceremony.

Drake chose to skip the Grammys entirely by not submitting his latest project More Life for consideration for album of the year or best rap album, according to a report by The Associated Press.

Other Canadian nominees include:

Tony-winning Come From Away musical to get Canadian film adaptation
November 15, 2017 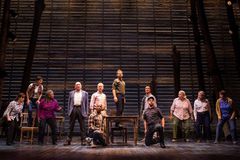