Joel Ivany and Christopher Mokrzewski seem like your typical latte-drinking buddies as they saunter through the coffee shop on Queen East in Toronto. Both are dressed casually, in T-shirts and jeans. Maybe they're in tech, or working on a startup. No, film, that's it. Commercials, maybe.

Wrong on all counts. Joel and Topher, young, laid-back and relaxed, run an opera company. But not just any opera company. Their Against the Grain Theatre collective is one of the most creative, original and fascinating arts organizations in Toronto. In just a few short years, they have provided the city with a raft of intriguing musical/theatrical events. Their Uncle John, an updated version of Mozart's Don Giovanni, was a smash hit last December.

Today, they're talking about their latest production, Death and Desire, which plays this week featuring soprano Krisztina Szabo and tenor Stephen Hegedus. All they've done in Death and Desire is to take two sets of songs, Die schoene Muellerin, written by Franz Schubert in the early 19th century, and Harawi, by 20th-century composer Olivier Messiaen, mash them up together, find a new story from the combined texts and turn it into a theatrical production.

In doing so, they have broken about 100 classical-music rules all at once. They have "destroyed the integrity" of the original pieces. They have combined works intended to be presented separately. They have added a story that wasn't there in the original. They've changed the order of the pieces. They're butting up musical languages, two centuries removed, that have nothing to do with one another.

And, if Death and Desire runs true to Against the Grain form, the result will be a stunning artistic triumph.

It was Mokrzewski, a Messiaen fan, who first thought of connecting Harawi and Die schoene Muellerin, despite the many, many differences in their musical language. Where the Schubert is ordered and contained, albeit still a work of Romantic art, the Messiaen, written in 1945, is wild, obsessive, personal, passionate, filled with notated bird song, Peruvian rhythms, obsessively repeated chords – two completely different musical sensibilities, one would think.

But Mokrzewski realized that both song cycles had a static quality to them, that Schubert's simplicity, as he told me, "remarkably complemented the glacial, glossy, multicoloured world of Messiaen." And both song cycles are about passion, and suicidal passion, the impossibility of reaching the other, the emotionally interwoven electric currents of love and death. Originally, Ivany and Mokrzewski were going to present each cycle on its own, one after the other. However, once the idea presented itself to them to interweave the two, and "we crossed that line," as Ivany says, "the ball kept rolling."

That ball will come to a stop Tuesday evening in the intimate venue of Toronto's Neubacher Shor Contemporary Gallery, chosen specifically for this production, as are all the Against the Grain venues. The resonances of performing spaces are very important to this company. In that, as in so many other aspects of their aesthetic credo, Against the Grain is actually a very conservative company. Such a designation may surprise classical- music purists whose idea of heart-thumping novelty is to increase the metronome markings for a standard work by 2 per cent.

But Ivany and Mokrzewski both came out of, and are still deeply involved in, the traditional music scene in this country (Mokrzewski works for Calgary Opera; Ivany will direct for both the Canadian Opera Company and the Toronto Symphony Orchestra next season). More to the point, they do not see themselves, as Mokrzewski observes, "as being part of the fringe for its own sake, which can turn into a ghetto. We want to reach as many people as possible." And they both understand that the way to engage audiences, old and new, purist and unconventional, is "to be good," as Mokrzewski says. Quality of performance is their first artistic goal.

And anyone who has engaged with an Against the Grain production knows that they take that credo seriously. When you break all the rules, you have to observe at least one faithfully – that expressive quality wins out over all potential hurdles. If the company is truly understood as going against the grain of conventional classical music, it's not to destroy that surface, but to make it a more defined, more pointed, more telling expanse.

Theatre Review
The Dybbuk and Durango tell ghost stories and tales of muffled men
May 22, 2015 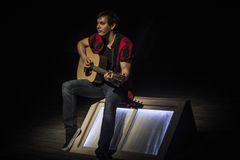 Theatre Review
Les Grands Ballets' new Death and the Maiden is appealing but repetitive
May 15, 2015 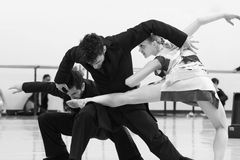 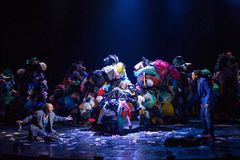